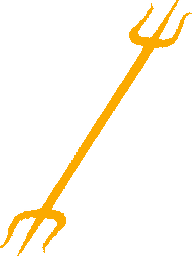 Ψdon's Entente (pronounced PSI-dun's ahn-TAHNT) is a legendary golden double culling fork that is wielded by Feferi Peixes. She is able to use this weapon due to her Strife Specibus being "2x3dentKind", reflecting the fact that the fork has two sides, both of which sport three prongs.

This weapon is said to be reserved for royalty, and generally is used for ceremonial purposes.

Its name is a pun: the Greek letter Ψ (psi) looks like a trident, and when pronounced the name sounds similar to Poseidon, the Greek god of the sea. Sidon is also the Greek word for fishery. The word 'Entente', meaning a diplomatic agreement between two nations, refers to Feferi's position as royalty. It also alludes to Feferi's desire to unite the two troll races. The whole pun is also a reference to the Triple Entente, the treaty between Britain, France and Russia in WWI, specifically a reference to its three-sidedness. 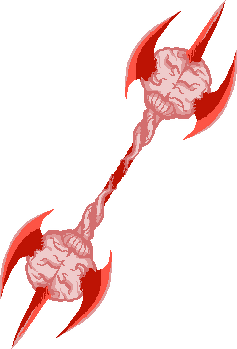 In the Act Five flash page "Make her pay

", Feferi is shown wielding a red trident with a brain on either end. This Trident was likely alchemized from a combination of the brains inhabiting the Land of Brains and Fire and her Ψdon's Entente.

Its name is possibly a reference to the esoteric programming language Brainfuck.

Meenah's golden double trident is very similar, though not quite identical to Feferi's. She uses this weapon in an attempt to strangle Roxy when she becomes trapped between the two fenestrated planes. Meenah successfully stabs John with it when he jumps in the way of the weapon, saving a sleeping Roxy in the process. She stabs John with it a second time near the very beginning of the Ministrife

Aranea is known to take away Meenah's "poking privileges" with this weapon. The weapon itself is apparently made out of gold, which isn't surprising considering Meenah's love for all things bling. It's safe to say it's a very aerodynamic throwing weapon and Meenah is quite a good shot with it.

The Condesce uses a trident similar in appearance to the Ψdon's Entente, although larger and decorated with a fuchsia spiral curling around the staff.

Based on the wounds on Jade English's

bodies, this weapon was likely used to kill both of them. The pre-scratch]] version of Rose Lalonde was also fatally wounded by trident in [S]GAME OVER.