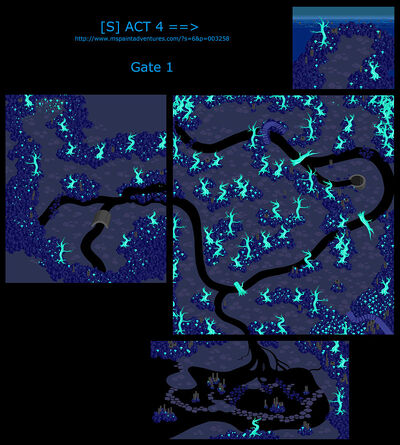 , is the second detailed walkaround Flash in Homestuck. It shows John exploring the Land of Wind and Shade while directed by an Exile, later revealed to be Peregrine Mendicant. He talks to Nannasprite telepathically, as well as with many of the Salamanders living here. A canonical version of the events in this flash, as seen from PM's point of view begins here

. The song playing during this flash is Doctor ♫.

John starts around the center of the area. Talking to the salamanders in the area has them tell him of how The Slumbering One made a deal with Dersite Agents, created the Imps, clogged the planet with oil and brought eternal cloud cover over him. They also explain to him how this can be reversed by waking and killing Typheus.

Two salamanders explain the Parcel Pyxis system to John. Near them are parcel pyxis in which he finds two minitablets carved by his Dad, and sends him a hat and a shoe in return, without knowing who he is sending them to.

On the right-hand side of the map John can examine a large pipe from which he hears the snoring of his denizen. At the top-right corner of the area a salamander offers to sell John a harlequin statue. Nearby there is a path to a high location.

At the top of the area he finds a desecrated frog statue and learns the importance of amphibious and reptilian life forms in his quest. Just to the right of the statue is one of the salamanders who explains the parcel pyxis. On the left-hand side of the area, just below the frog statue, is a path to a new area.

The bottom-left corner of the area is cut off by a river of oil, it can only be accessed through the left and bottom areas. This area contains a salamander who offers to buy John's suit and a Parcel Pyxis containing a frog.

At the bottom of the area is a path to an area dominated by oil. Right above it is one of the salamanders who explains the parcel pyxis. In the bottom-right corner, just to the right of this path is a path that leads to the end of the Flash.

After following a path at the top of the central area John reaches a high place. Using his telescope, John spots his house high above the planet. If he has dropped the telescope, he can find it again in the parcel pyxis here. Nannasprite gives him a short explanation on the nonlinear path his gates will take him on.

John enters this area from one of two paths from the central area. At the center of the area a salamander who identifies himself as Crumplehat. At the top-left of the area John finds a gathering of salamanders and a mushroom farm. A parcel pyxis at the bottom-right of the area gives John a firefly encased in amber, believed to be Serenity.

John enters this area from one of two paths from the central area. To the right of the area he finds a salamander wearing his bedsheets identifying himself as a secret wizard. In the parcel pyxis in the area John finds an uncarved minitablet and a chisel, which he later uses to request his Sburb server disc.

Numerous Shale, Cobalt and Mercury Imps can be found throughout the game. John has a variety of different attacks he can use against them. A regular attack with the Wrinklefucker can be done by pressing Space, while pressing Z causes John to Flip the Fuck Out in a more powerful attack that slowly drains Boypluck, which replenishes over time. Either of these attacks can be augmented by holding the Shift key to dual-wield with the Pogo Hammer. Additionally, holding Space allows John to charge his Mangrit, unleashing a very powerful attack that will KO any imp.

Attempting to enter Trickster Mode in this flash causes John to do the animation associated with This Is Stupid.

Retrieved from "https://mspaintadventures.fandom.com/wiki/Act_4_(LOWAS)?oldid=227181"
Community content is available under CC-BY-SA unless otherwise noted.