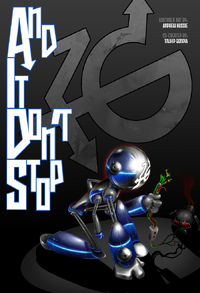 And It Don't Stop (MSPFA mirror, Tumblr mirror, MrCheeze mirror) is a comic written and drawn by Andrew Hussie, with a co-creator credit for Tauhid Bondia. According to a post on Bondia's Tumblr, the comic was originally supposed to be a collaboration between the two artists, but Bondia only came up with the central idea and designed many of the characters before leaving the project; Hussie would finish the comic by himself, illustrating all pages and writing all dialogue and raps. Years after And It Don't Stop was released, Bondia wrote and drew a six-page prequel comic.

The setting of the story appears to be a society where the major spectator event is an art form called "Tech-Hop", which consists of rappers operating robots in combat while simultaneously rapping. It is unclear how much independence the robots have from the rappers' control, or whether the operation is directly tied to the rap, though evidence suggests that the smoother the rapper's flow, the more effectively the robot fights. In addition, two attributes are factored in: "Groove", which is a theme that the rap must follow, and "Shade", which the rap must contain rhymes with.

Retrieved from "https://mspaintadventures.fandom.com/wiki/And_It_Don%27t_Stop?oldid=247763"
Community content is available under CC-BY-SA unless otherwise noted.