The Army of Light, from Prospit, and the Army of Darkness, from Derse, are armies composed of the Chess piece-theme carapacians, though both armies wield far, far more "pieces" than any single chess board would have, due to Prototyping of the The Battlefield upon which the fighting takes place. Prospit enters the battle to protect Skaia, while the Dersites covet its destruction. It's a war which Derse is always destined to win, in order to provide the Sburb players with an endgame scenario and a final boss. The first battle to be shown is the B1 session battle in [S] WV?: Rise up.

The Pawns of the two armies are, like in chess, the most abundant species in the field, though they appear to be more versatile than the title "pawn" would make them seem. For example, they are capable of battlefield insertion via rappelling from a high-speed flying vehicle. They have been seen carrying swords, spears, and a type of assault rifle. The Dersite Pawns were seen wielding gray rifles in the beginning, while both the Black and White pawns of the combined rebellion army wielded pink rifles, assumed to come from the Dersites. They also move in the same way as in chess (moving straight ahead or diagonal by one tile while swinging their weapons), making them easy to defeat; this is mentioned in 'A Foot Soldier's Guide To Combat' in the Seer: Descend flash.

The Pawns seem to have minds and wills of their own, as evidenced by many setting aside their differences and allying with the Warweary Villein in order to attempt to overthrow the Black King.

The fact that they line up in diagonal formation while doing so may or may not be symbolic - possibly that in chess, a diagonal formation with pawns may be used as a "barrier" for the pieces behind. As pawns can only take other pieces by moving diagonally, it means none of the pawns in the formation can be taken (without the taking piece being taken itself), because each piece is protected by the piece diagonally behind it.

, a female soldier is seen who is holding a bow. Another archer was seen on the battlefield reloading their bow. These Archers seem to be a version of the pawns that normally hold swords. It appears that they attack from a rook-like building, but some have been seen on the actual battlefield. 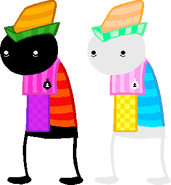 The pawns of Derse and Prospit.

Young archers or regulators with... guns.

The Rooks appear to be horrifically mutated Pawns, with ripped Pawn uniforms and grotesquely misshapen muscular bulges all over their torsos. Most notable about the Rooks are the enormous, castle-shaped hunches on their backs. Whether intentional or not, they share visual similarities to the Tank Special Infected from the game Left 4 Dead. The only weapons seen to be carried by Rooks are large clubs made from either brown stone or wood, carried by the White Rooks. Their combat capabilities are at this time unknown, for currently the Rooks haven't been seen combating other units, only alongside the Black King or being crushed by a Black Knight. It can only be assumed that, given their mass, they are far stronger than average Pawns.

Similar to how there are giant creatures based on the Bishop, there appear to be massive Rooks too. These "creatures" have four arms and no apparent weaponry. Like the Bishops, these too are partially affected by prototyping - a black Rook had only three arms. Interestingly, pawns use them as living fortresses and attack from their heads.

A large, checkered spider-like creature is also seen once. It is checkered black and white and also looks like a rook.

Only seen standing near the Black King, it is uncertain what the Bishops are capable of. It probably involves majyyk, though. They are dressed like mages to some extent. 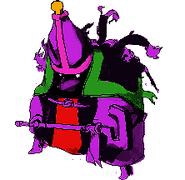 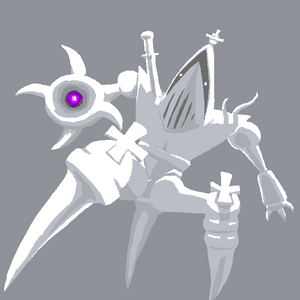 A very large (even bigger than the knights), tripedal being with a laser cannon for an arm. It is decorated with crosses and has a triangular helmet shaped precisely like a traditional Bishop piece. It's shown to be affected by prototyping, but to a much smaller degree than the royalty.

The only Knight seen so far in the Armies was fielded by the Dark Army. The Knights seem to be ENORMOUS war-horses whose hoof-steps can knock smaller foes off their feet and crush several. The bottom of one of the Black Knight's hooves was much larger around than a Rook and far, far taller.

A Knight steps on some Prospitian Pawns and Rooks.

A different, more humanoid, knight based unit resembling a musclebeast has also been seen. A Dersite version can be seen in a jar on the trolls' asteroid during Alterniabound, while a Prospitian one can be seen dead in Seer: Descend.

A creature called The Inquisiclops can be seen in Alterniabound. It appears to be a knight-based unit affected by troll prototyping.

Also, right before Gamzee kills Equius, he can be seen sitting on a jar with a knight unit that resembles his lusus.

The light and dark kings are also seen on The Battlefield. There are, of course, only two, as in a game of Chess. The kings don't appear to do much fighting. They each hold a large scepter with a miniature Skaia on its top. The White King de-activated his scepter and gave it to PM?, causing him to shrink down to about the size of a rook. The scepter was then stolen by HB. The White King returned to his castle at some point. The Black King was rebelled against by WV? and a bunch of pawns before he was killed by Jack Noir. Jack Noir then took one of the King's Scepters and activated The Reckoning.

The Black King towers over his troops while a Knight and Unidentified Unit lurk in the background.

There is an unidentified unit fighting in Skaia, and only the one from Prospit has been seen clearly. They don't seem to match any of the known chess pieces, for some reason. However, since both rooks and bishops have overgrown counterpart units it is possible that this unit is simply the large version of a pawn. It is also possible that it is based on the concept of fairy chess pieces. It may be worth noting that, after being prototyped once, the Battlefield contains not just King, Rook, Knight, Bishop, and Pawn pieces, but also one other unidentified piece.

Prospitian Pawns lay dead on the Skaian battlefield while a Knight and two Unidentified Units tower in the background.

An archer and regular pawns with unidentified units in the back.

Both armies fielded gray, trapezoidal vessels with the Skaia symbol printed large on their undersides. These vessels have been seen both dropping combat troops via rappelling line, as well as having dogfights with one another. Most peculiar about these ships is that they look exactly the same on both sides of the conflict. There are also several other gray ships visible in the aerial battle, but their shapes and sizes are difficult to determine.

Among the two fleets active in the skies of the Battlefield, several enormous purple and yellow colored vessels (similar to airplane carriers) are visible, presumably the carriers or battleships of the two fleets. Liv Tyler, the Wizardly Vassal, and Courtyard Droll took a purple Dersite ship to Derse's moon to deliver The Tumor, while Jade Harley and John Egbert took a yellow Prospitian ship across the Yellow Yard. The White Queen of the pre-Scratch kids' session and the Black Queen of the post-Scratch trolls' session both took royal battleships through Reckoning portals to exile themselves. 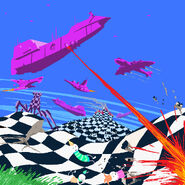 Retrieved from "https://mspaintadventures.fandom.com/wiki/Armies_of_Light_and_Darkness?oldid=241013"
Community content is available under CC-BY-SA unless otherwise noted.