Normal syntax, uses all punctuation. Starts and ends his sentences with |||.

The Prince of All Mustardbloods ♫

Azdaja Knelax is a young Alternian troll living in Outglut during the time period of Hiveswap and Hiveswap Friendsim. Azdaja was first revealed during the Hiveswap Troll Call event alongside Konyyl Okimaw on February 28, 2018. Azdaja later went on to be featured in Hiveswap Friendship Simulator: Volume Nine alongside Chahut Maenad. His bullet points were "you know, the number? the big one, pretty close to 10k? he's... above that amount", "PRINCE of ALL MUSTARDBLOODS", and "good listener". He was designed by Shelby Cragg. His bullet points were altered as from December 6, 2018 to "PRINCE of ALL MUSTARDBLOODS", "Power level off the charts" and "Duel strifers champion two sweeps and counting".

His name can be derived from the demon Kasdeya. "Aždaja" means "dragon" in Serbian and Bosnian. Knelax could be derived from "knell" and "lax". Knelax also sounds like the tissue brand Kleenex. His sign could also be a reference to The Millennium Eye from Yu-Gi-Oh! franchise.

Azdaja is a goldblood who works as an assassin-for-hire alongside Konyyl Okimaw, and the two are noted to be quite good at their trade. He was briefly mentioned by Konyyl during the events of Hiveswap Friendsim: Vol. 7. During his appearance in Hiveswap Friendsim: Vol. 9, the MSPA Reader first sees him silhouetted dramatically against the desert backdrop. As Azdaja is too busy looking at something through the device on his face, he does not notice the player at first.

If the player waves and says hello to him, he will turn and inquire whether they're lost. After the player explains that they're just sight-seeing, Azdaja will bluntly tell the player to do that someplace else. Curious as to what's going on, the player asks what exactly Azdaja is busy preparing for. The goldblood gives you a brief spiel that only serves to confuse the player, as they've never heard of Duel Strifers. Taken aback with the player's apparent cluelessness, Azdaja comes to the player's side and begins pouring over every little detail of the game painstakingly. Not listening intently, the player nods along until Azdaja is interrupted by the device on his face. After commenting that he's unable to pinpoint the player's exact species, he remarks that it's possible to join in teams of two.

Should the player agree to be the best lackey ever, he will take the player to the base of the canyon, where the duel is about to take place. Unfortunately for Azdaja, his plan to gain a tactical advantage was thwarted when a cerulean girl launches an ambush and proceeds to mind-control him. Panicking, the player dodges Azdaja's attacks and drags him into a nearby cave so as to break the psychic hold over his mind and save themselves from falling rubble. Back to his senses, Azdaja berates the cerulean troll for a bit before talking about himself as a gifted psionic. After a long while, he blasts open a path out of the cave, remarking that the game was over. The player is initially worried that Azdaja would blame them for making them lose, but the goldblood delightedly reveals that as they're the last two standing, they've won. Azdaja is elated for bringing the player along in the first place, and declares that celebration is in order after the cash prize is collected.

If the player climbs up the cliff face in an attempt to surprise him, he will sneer at the player's lousy attempt at sneaking up on him before lifting the player up with his psionics. While Azdaja dangles the player over the sheer drop, the player will hastily explain themselves as to remedy the situation. Azdaja ignores the player, claiming that they're out to sabotage his chances at a game. He releases his hold on the player, sending them plummeting down the canyon.

If the player scoffs at the idea of being his minion, Azdaja will be slightly put off by the player's following rant. Azdaja then reveals that he suspects the player to be the assassin that murdered a high-profile seadweller, much to the player's consternation. Azdaja then begins firing at the player, rendering them unable to explain that a misunderstanding is at play—Polypa is the aforementioned assassin, not the player. Fleeing back to the train station does the player absolutely no favours, and the player braces themselves for death when Azdaja's attacks become more savage. Just then, a train arrives and a figure leaps off one of the carriages. Stunned by what's going on, Konyyl demands to know why Azdaja is poised to murder her friend. After a heated debate over the player's real identity, Azdaja accepts that the player is just an ordinary person. Deciding that the player is no longer worth any of his time, Azdaja will ask Konyyl to join him at the base of the canyon for some culls. The duo then leave without a backwards glance.

In Hiveswap Act 2 Azdaja appears in the gold and olive train car. He is in an argument with Konyyl about a failed job and is blocking the way to the next car. Joey gets Folykl to try and incapaciate him but he is too powerful. He then challenges Joey and Xefros to a strife. After knocking out Joey Xefors gets angry and slams him multiple times with his psychic powers, winning the fight. After this he reconciles with Konyyl and lets them though to the next car.

Azdaja is a skilled professional killer that handles most of the planning and scheming side of things, as mentioned by Konyyl in Hiveswap Friendsim: Vol. 7. He uses his device—a scouter—to scan for information, be it for coordinates or in the player's case, their species. He also stresses the importance of having good strategy so that he and the player would have a tactical advantage in Duel Strifers; urging the player to increase their pace so that they can surprise their opponents. Thus, it can be inferred that he understands that having all relevant information on a particular person or subject would place him in a better position to execute plans. Despite this, however, he winds up mistaking the player for someone else entirely even though his other deductions were correct.

He is noted to be a bit pompous in terms of personality; the player notes that he appears to enjoy listening to the sound of his voice when explaining the intricacies of Duel Strifers, hence his excessively detailed spiel regarding the subject. Azdaja also uses his psionics to flap his overcoat just for the sake of creating a dramatic effect, regardless whether there is a breeze. When attacked by a cerulean girl, he becomes visibly angry as he cannot believe someone had the gall to mess with him. Also, he is quite smug about his exceptionally strong psionics; scoffing at 'weaklings' that desperately want an unbeatable psionic on their side. It should also be noted that he does not like mediocrity, given the fact that he believes being gifted entitles him to a better life.

Even though he may be self-centred at times, he still knows when to thank the player for helping him out in the game. This is evidenced by the roundabout way he expresses his gratitude towards the player, and he insists that celebration is in order once he and the player collect the cash prize. Azdaja is more than willing to split the winnings with the player, showing that he isn't all that egocentric.

As mentioned earlier, Azdaja is an incredibly powerful psionic, the strongest one the player has met so far. When Azdaja picks the player up with his psionics, the player describes the sensation like 'stepping on a strong breeze'; when Kuprum used his psionics to levitate them, it felt like being yanked up by the scruff of the shirt. Another example is shown when Azdaja is briefly mind-controlled by the cerulean girl, his eyes glow so brightly the sight scares the player witless. As it were, he possesses exceptionally strong psychic powers that makes him the envy of others, and is frequently approached by others that want a powerful individual on their side.

While the final bullet point on his Troll Call card describes him as a good listener, Azdaja seems to only extend this courtesy to people he's well aquainted with. This is best illustrated in one of the bad endings: during his heated debate with Konyyl regarding the player's true identity, he quickly accepts her description of the player without much fuss. When the player attempts to explain themselves in either of the bad endings, however, Azdaja pointedly ignores the player's frantic words and either drops them or begins attacking the player.

Despite being a lowblood, he and Konyyl do not care for the plight of the oppressed. He outright states that he has very little regard for both the Empire and the rebels; as long as he and Konyyl have killing to do and money to earn, he couldn't be bothered by political events on Alternia. However, Azdaja does not seem to relish the idea of being sent out to space by the Empire, as it means that he can no longer do cool things of his own volition.

In Hiveswap Friendsim: Vol. 7, Azdaja is mentioned to be the long-term matesprit of Konyyl, and functions as the brains in their operation. In Hiveswap Friendsim: Vol. 9, Azdaja is shown to be genuinely fond of Konyyl, speaking of her recklessness in a wistful manner when he and the player are traversing a cave network in the canyon. However, he accidentally reveals that he has pale feelings for her in a verbal slip-up; referring to Konyyl as his moirail instead of matesprit. As such, it can be inferred that he has conflicted feelings for the oliveblood, as Azdaja becomes either flustered or defensive when others try to ask about the true nature of his bond with Konyyl. It is not made clear whether Konyyl is aware of this fact, as she consistently refers to Azdaja as her matesprit.

In Hiveswap Friendsim: Vol. 15, the two are found in a cave together, and soon after meeting the player descend into squabbling in a manner described by the player as, "about a hair's breadth away from turning into physical sparring, but they also kinda look like they want to make out". The ending screen for the route they're in shows them yelling at each other, marked with various clubs, implying that their relationship is at the very least currently undergoing vacillation.

Konyyl and Azdaja are caught in an argument over a failed job, leading to the others on the train to perceive them as kismeses looking for an auspitice. Joey and Xefros's intervention causes them to reconcile and admit that they really care for each other. Konyyl says that she just wants to be his partner and doesn't want him in any other quadrant than flushed. 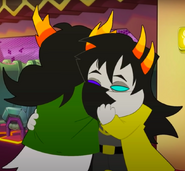