For the post-scratch counterpart of this character, see God Cat.

Age (As of subsumption by Dream Jade.)

Becquerel (or Bec for short) is the pet and Guardian of Jade Harley and first guardian of Earth. Like many things related to Jade, he is quite the combo-breaker, as he is the first non-human Guardian, despite all hints having been pointed at Grandpa to be Jade's Guardian beforehand. He is a dog with the ability to warp space to his will.

A becquerel (shorthand: Bq, named after French physicist Henri Becquerel) is the International Standard unit of measurement for radioactive decay. Becquerel is also the last name of the man who discovered radioactivity itself, using Uranium, a possible reference to Jade's Associated Item. Continuing the physics theme, abbreviating his name to Bec might also allude to Bose-Einstein condensate.

Becquerel shares the same birthday as John, April 13 - however, he came to Earth millions of years ago, long before the Kids did. He was created by the Draconian Dignitary using the DNA encoded from Rose's notebook, and that of the dog Halley in the Frog Temple meteor lab. The omnipotent puppy-Bec was seen destroying the lab just as the Reckoning was beginning. The Authority Regulator witnessed this event, and it led to him recognizing Bec's face on a pumpkin when he became the Aimless Renegade. The creation of Bec is most likely the reason the gods from the Furthest Ring believed it was important to destroy Rose's notebook, though since they seem to have an understanding of temporal inevitability, it is very unlikely they thought that stopping Bec's creation was a possibility.

The Frog Temple meteor was sent onto Earth by a Skaian portal, and crashed into Jade's Island. Lava from the nearby volcano flowed into the impact crater and the young Becquerel was seen emerging from the lava pool.

He is next seen observing Grandpa Harley's and Jade's arrival to the island from a distance. He eventually becomes their loyal pet. Bec is undoubtedly Jade's guardian, as he seems to be the only other sentient being on the island we know of. It is a role he inherited from Grandpa after his death.

When a dreaming Jade attempted to investigate his arrival on earth in a Skaian cloud, Becquerel appeared in front of her and blocked her from investigating. In the dream world, she was stopped from looking at a glowing white orb with the Sburb spirograph logo in it; meanwhile, in the real world, the Dreambot, which was mimicking the actions, was denied entry to the Frog Temple. It is unknown what secrets Bec was trying to keep from Jade.

After Jade's dreambot explodes, destroying her bedroom and sending Jade falling to the ground far below, Bec is seen watching from a distance as a colossal meteor bears down on the island. As expected, Bec finally rescues her

shortly after the beginning of Act 5 Act 2.

As Jade is about to enter the Medium, Bec prototypes himself and destroys the meteor inbound for Jade, and even redirects her bullet into the Bec-shaped piñata. This generates an explosion that reaches all the way to Dave's city in Texas, and possibly across the entire Earth, sparing only Jade's Island. This is probably largely responsible for wiping out humanity on Earth before the Exiles arrived.

Becsprite appears in its Skaia prototyping form on Earth, rather than after entering the medium. Presumably this was done for stylistic purposes as a floating Bec head is kind of silly looking.

After his entry to the Medium alongside Jade, he blows up the Peregrine Mendicant's computer when she tries to contact her. Even as a sprite, he seems to remain incapable of speech, and talks in giant blocks of flickering images containing no text.

Bec's second and final prototyping was with the taxidermied corpse of Jade's dream self, the new sprite being a combination of Bec and Jade, known as Jadesprite. Since Jadesprite's personality overrode Bec's, and then Jade ascended to god tier, he was presumed to be permanently removed from existence. This was later confirmed by him being crossed out in the Hussiebot update.

However, even after ascension Jade occasionally displays dog-like behavior, like barking at meowing cats, so it seems that minor parts of Bec's personality have survived in Jade. This is further supported by the fact that the Condesce had to use both Vriska and Tavros' mind control powers in order to control Jade (Vriska's mind control works on sentient beings but Tavros' only works on animals).

After Jack gets prototyped with Bec, he also gains some of his traits, such as thinking of dog treats and mailmen. He also gains feelings of loyalty and even love towards Jade which led to him being unable to kill her. Apparently these feelings are so strong that he could not even bring himself to destroy a banner that bore her symbol.

According to Andrew, Bec is an "Omnipoterrier". However, his physical appearance is more akin to a White Shepherd. Other than upright ears and a canine snout, he lacks a lot of facial features, similar to the other Guardians. He has not yet demonstrated any hobbies that Jade dislikes. Despite being an intelligent creature, Becquerel still exhibits distinct dog traits, such as intense loyalty to Jade, an obsession with fetching, a love of meat (he likes irradiated steak) and, as shown when PM tries to guide Jade, a deep hatred of mail-men, to the point of overloading her terminal.

Despite his enigmatic nature, John is convinced that he only acts with Jade's best interests in mind, describing Bec as a “guardian angel or something [that should be taken] out behind the woodshed [where Jade should] give him a big hug.”

Andrew stated that Bec is not fully omniscient like Doc Scratch, due to being created from an average dog instead of an all knowing magic cue ball.

Dave describes Bec as a “fucking devilbeast [that should be taken] out behind the woodshed where [Jade] should blow its head off.” Jade says she couldn't accomplish such a task if she tried. This has proven to be true as, despite her shooting at him several times with her rifle, he is unharmed; Bec simply alters space to avoid being hit by the bullet. He also seems to have fantastic speed; not only does he seem to be able to perceive and interact with bullets as if they were barely moving, but he can also run ahead of them quite a distance, allowing him to fetch bullets in mid-air. Jade never knows what Bec is doing, so it is assumed that he does not show up in the prophetic cloud images on Skaia. It is possible that Bec is controlling time and space so that he may keep his doings a secret from his young charge. This directly corresponds with his manner of introduction to the story. He was initially only seen in very vague ways - first as a carving on a pumpkin in Jade's garden, then as a silhouette in pictures and the background - up until the obligatory introductory Strife scene.

Appearances in other media[]

This article section is empty. Please help MSPA Wiki by contributing to it.

A Fun Day for Bec

After fetching a stick on what appears to be Jade's island, Bec teleports to various other locations around the world. He catches a baseball at an official-looking game mid-pitch, intercepts another dog's frisbee at a beach, steals a cricket bat, and picks up a football in the middle of a game. We see a flurry of other sports bats and balls, as he returns home to a large pile of them near the stairwell. Looking pleased with himself, he settles down on the bed in Jade's room, to which she remarks that he's such a lazy dog! 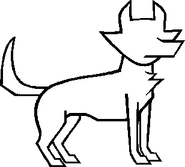 Bec as a puppy.