For the true identity of the character operating under this name, see The Condesce.

Betty Crocker (aka Crockercorp), is a real-life interstellar international corporation owned by General Mills. In the Homestuck universe, however, Betty Crocker is a shady and conspiratorial company owned by none other than the Batterwitch herself, who came to Earth through weird time-space shenanigans, appearing on both the pre-scratch and post-scratch versions of Earth. Though on pre-scratch Earth the company never became more than a vast baked goods empire, focused on producing food, such as baking mixes and Gushers, post-scratch Betty Crocker focuses its efforts on subliminal propaganda hidden within all of its products. Though originally based on baking and confections alone, it was rebranded as Crockercorp on 11/11/11, experimenting with alien technology and diving into politics with an iron fist. Roxy Lalonde refers to Crocker as a cake sellin genocidal alien overlard sea queen

Whether the disparity between the two instances exists due to nearly three more years having passed or due to outside influence is currently unknown.

In the pre-scratch instance of our universe, The Condesce came to Earth at some point before 1910 (the year of Nanna's arrival), founded the Betty Crocker pastry empire, and married Colonel Sassacre. When Nanna's meteor arrived, the Colonel adopted her. Eight days later, Grandpa arrived on his meteor, and accidentally shot Sassacre by dual-mishandling flintlock pistols. The baroness raised both children, telling them that they were the natural-born children of herself and the late Colonel. They both considered her to be a rather wicked woman and did not get along with her.

Though raised by the baroness, the two followed in the footsteps of her late husband, learning the ways of pranksterism. However, their interests drifted apart, and at the age of 13 Grandpa ran off with their dog, Halley, in search of adventure. Out of fear of the baroness, Nanna stayed behind, instead deciding to defy her wicked mother by mastering the baking arts that she taught her, hoping to one day surpass her evil mentor.

During the years Nanna' spent as Crocker's pupil, she uncovered many dirty secrets about her, most alarmingly the fact that she was not human.

The baroness later revealed to Nanna that she and her brother were not truly related, but destined to be married and produce a pair of children who would save the world, and that she had gone to extensive lengths to prevent such happening. That day, Nanna swore to bring down the baroness and her evil empire by using the many secrets she'd learned over the years against her, and began carefully plotting her downfall. However, before her plan could be put into action, the baroness simply vanished one day without a trace. Presumably, she traveled to the post-scratch instance of our universe, to take up the company there.

The pastry empire was then bequeathed not to Nanna, but to Grandpa, who integrated it into his already extensive business empire. Thus, during John's lifetime, Betty Crocker is owned by Skaianet. John resents Betty Crocker, tired of his Dad's cakes and disgusted by her ownership of the Gushers brand. He is unaware of the relationship between Crocker and his family.

Upsettingly, she is responsible for Dave's premature access to the Insane Clown Posse song Miracles, which ultimately lead to Gamzee's religious upheaval and "termination" of pre-scratch Earth.

The Condesce arrives on post-scratch Earth in a similar fashion to her arrival on pre-scratch Earth, also founding the Betty Crocker company, marrying Sassacre, and adopting Grandma and Poppop. As neither arrived wielding pistols, the cause of the Colonel's death is unknown. However, it is known that his stuffed corpse was kept in the living room while Poppop and Grandma grew up, as was family tradition. On post-scratch Earth, Grandma is the one to run away from home, while Poppop stayed behind and followed in Sassacre's footsteps to become a famous comedian. Grandma at some point found out that the one thing the Condesce feared was her master, L

rd English, so she took his name and started a competing tech company heavily branded to resemble him, with green skulls and garish colors. This company, also under the name of Skaianet, ultimately went bankrupt, forcing Grandma into exile, where she was eventually murdered by the Condesce.

The post-scratch Betty Crocker company is more tech-oriented than its pre-scratch counterpart. As described by Jane, "it releases many products of an experimental nature, often with applicability to other kinds of technology and products which haven't hit the market yet." The company, having overthrown Skaianet, is responsible for several equivalents of products that would have been made by Skaianet on pre-scratch Earth, including the Alpha release of Sburb, and the BettyBother client (though, with its numerous ads and subliminal messaging, BettyBother is hardly competitive with Pesterchum).

Jane Crocker, unlike John on pre-scratch Earth, is aware of her connections to the company, and is eagerly awaiting to inherit it once she turns eighteen. She refers to the Batterwitch as her great-great-grandmother

, but believes her to be dead, as she would have been nearly 200 years old by now.

Many clues to the Batterwitch's identity were given throughout Acts 5 and 6:

It is still unknown, however, how the Condesce was in both the pre-scratch and post-scratch kids' universes, as well as their post-scratch session. It may have been facilitated by her employer, L

Though the Condesce is the empress of the post-scratch troll universe, there is oddly a "Troll Crocker" referenced by Karkat in Alterniabound. One of the items that can be found is a pack of "Fruit Trollups", featuring a greyed out version of the Betty Crocker symbol with troll horns. Alterniabound was posted nearly a year before the reveal of the Condesce, however, so her existence may not have been thought of (or was simply hidden to avoid suspicion) at the time.

After winning Sburb, Jane becomes CEO of Crockercorp in the new universe, though instead of inheriting it she seemingly rebuilds it from scratch. In the same vein as the original spoon and the Condesce's trident, its new logo is a spork.

There never was a real life Betty Crocker associated with the company. She is a fictional character created by General Mills to answer letters, write books, and later become a franchise of her own. Many people over the years have written under this pseudonym, and many have posed to be the face of Betty.

Jane owns this chest and uses it to store several personal belongings and other Crocker products. It's unclear if it has any special functionality other than being a chest. Its appearance and contents directly parallel the Magic Chest owned by John.

The Junior Battermaster's Bowlbuster Stirring Solution 50000 can store several million recipes inside it, with a soothing female voice that walks you through each one. It is also currently Jane's "weapon" of choice. As of the rebranding the Stirring Solution can toggle between a Stirring and a Poking Solution.

BettyBother is a Crockercorp chat client, albeit potentially only existing post-scratch. Jane Crocker uses it even though she clearly shows contempt towards it and outright says Pesterchum is better. However, brand loyalty is a powerful thing. It's stated that her friends use Pesterchum instead, and so it appears there is cross-program compatibility between BettyBother and Pesterchum, in a similar case to Trollian. While Pesterchum labels chats as "pestering" BettyBother uses the term "bothering" instead.

The Unreal Heiress Thoughtwave Tiaratop appears to be a sort of portable computer that mingles fast processor speeds and the wearer's thoughts. However, wearing it for too long tends to cause migraines, and may make the user OBEY susceptible to DIE Crockercorp propaganda. It should be noted that the Pisces zodiac sign is located in the center of the Tiaratop, bearing resemblance to Feferi and the Condesce. It also looks exactly like Feferi's tiara, except red.

Near the end of Act 6 Act 5 Act 1 x2 Her Imperious Condecension uses the Tiaratop to control Jane Crocker.

The Betty Crocker Dunce Cap, at least at this point in time, appears to be just a normal name brand dunce cap. It costs 10 boondollars to be converted into grist by the Gristwidget 12000.

Roxy is in possession of an appearifier

, which she frequently used to steal pumpkins. In order to prove to the skeptical Jane that she could in fact do such a thing, Roxy appearifies her copy of Colonel Sassacre's. Unfortunately, the book is big enough to kill a cat

, and that was indeed poor Jaspers' fate

, after GCat lured him 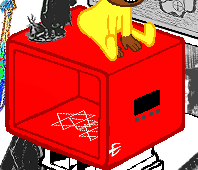 Dirk has a microwave-sized sendificator, which he can use to send any object that fits within it

. He sent Jake a number of items using it, including the entire robot version of himself, piece by piece. He later used it during [S] Dirk: Synchronize.

to send his own head to Jake, so Jake could kiss the head and revive his dream self to complete a temporal causality loop.

Jane once used a small Crocker-brand toy mouse to summon

GCat. She simply threw it on the ground, and the cat materialized, pouncing on it and then batting it around playfully. It is unknown whether the mouse has special properties or built-in electronics specifically appealing to GCat, and it's possible that GCat was simply drawn to the toy in a general cat-like fashion. It should be noted that the Condesce has interacted with GCat, and has controlled at least some of his actions. Whether this is the source of the toy's power is unknown.

On Earth C, 5000 years in the future, Crockercorp possesses a corporate transportalizer. It seems to have been brought along from the B2 universe. Jane mentions all Crockercorp technology was scrubbed clean by their chief engineer, which would have been necessary, to remove nefarious subroutines and exploits planted by the Batterwitch.

Retrieved from "https://mspaintadventures.fandom.com/wiki/Betty_Crocker?oldid=202037"
Community content is available under CC-BY-SA unless otherwise noted.