“1.Don't invite drama from up top down below.
2.Protect the Mother Grub.
3.We have no hierachy, but do what I say.”

Normal syntax, uses "vV" and "Vv" when excited. Uses a lot of lists.

Phantasmagoric Waltz ♫
Bronya Ursama is a young Alternian troll living in Outglut during the time period of Hiveswap and Hiveswap Friendsim. Her bullet points were "President of the the Grubsitter's Club", "buddy systems are go", and "long hair, does care". Bronya was first revealed during the Hiveswap Troll Call event alongside Wanshi Adyata on February 14th, 2018. Bronya was later featured alongside Skylla Koriga in Hiveswap Friendship Simulator: Volume Three. She also briefly appears in Hiveswap Friendship Simulator: Volume Six during Elwurd's route. She was designed by Shelby Cragg. Her bullet points were altered as from December 6, 2018 to "The mom friend", "True neutral" and "All of her opinions are extremely moderate and inoffensive, just ask anyone she knows".

She shares a first name with a Houkai Impact 3rd character. The Russian word "броня" (bronya) means armor, or a kind of aegis. This is characterized by her wanting to protect the grubs who were weak or deformed and would have been culled otherwise. Ursama could be a reference to Ursa Major, the star constellation of the mother bear. This could be a nod to her maternal nature.

A leaked placeholder for her name was "Chaperone", in reference to her overlooking many trolls, including Karako Pierot.

Bronya is a jadeblood living in buildings located in a network of caves (also known as the brooding caverns), tending to the Mother Grub with her fellow jades. Her life prior to the events of Hiveswap Friendsim: Vol. 3 seems to be a relatively peaceful one, as she mentions that jades haven't been culled in dozens of sweeps.

Her hive resembles a boarding school, with multiple floors and rooms. The place is also noted to be much larger than all the other hives seen so far.

In the events of Hiveswap Friendship Simulator: Vol. 3, she comes across the MSPA Reader, noting that the player is unlike anything she'd ever seen before. After laying down some rules for the player to adhere to, she invites the player into her hive so that she may tend to the players wounds.

She takes the player to the nursery created for healing sick and injured grubs, and proceeds to obtain an ointment for the player's ribs despite not being entirely sure whether the ethos would be compatible with the player's different anatomy.

If the player declines Bronya's offer, she accepts the player's rebuttal calmly. In an attempt to lighten the mood, the player offers to help her out instead. Deciding that she could use some assistance, Bronya takes the player to pay a visit to the Mother Grub. After reaching the main cavern, Bronya begins explaining details to the player. Unfortunately, chaos ensues as an Imperial Drone had injured some lusii and young trolls while going about its task. This causes one lusus in particular to lash out in grief, and the situation in the caverns becomes quite treacherous. Should the player decide not to play the hero and instead let Bronya handle the situation, the other jades will return before Bronya executes a risky plan to solve the crisis at hand. Relieved, Bronya oversees her fellow jadebloods clearing up the mess. When the player helps out a wiggler in need of help, Bronya is astounded with the player's strong nurturing instinct. The player points out that the wiggler seems to have trouble breathing, prompting Bronya to lead the player back to the nursery to care for the wiggler. After chatting for a bit, Bronya deems the player worthy of her friendship and agrees to look after the player until the player is hale and hearty.

If the player lets Bronya apply the salve onto their ribs, pain causes the player to flinch back instinctively. The player trips over something behind their feet, crushing something beneath them despite their efforts to regain their balance. Bronya is mortified when the player realizes that they have fallen right onto a wiggler, effectively killing it. Downright murderous, Bronya warns the player to leave as soon as possible before she causes the player grievous bodily harm.

If the player offers to deal with the rogue lusus, Bronya reluctantly lets the player take charge of the situation. The player ultimately fails at the task, and instead creates a bigger problem for everyone involved. Slightly irritated with the player's incompetence, Bronya saves the player with aid from her fellow jadebloods. Disaster strikes when the ruckus attracts the attention of the Imperial Drones, causing them to fire at anything and everything indiscriminately. Bronya is horrified by the slaughter going on, torn between helping the wigglers, her jades and the Mother Grub. Bronya spends a few minutes contemplating who to blame for this catastrophe, then decides to fault the player for the massacre, spitting on the player's offer to be friends.

Bronya appears in Hiveswap Act 2 in the jade and teal train car. She

Bronya is a patient, compassionate and dutiful troll, immediately taking the player in upon hearing that the player is suffering from some injuries. She is also in charge of the nursery for ill and wounded wigglers, taking care of them instead of letting them die per Alternian tradition. While she states that she herself isn't particularly sure why she feels the compunction to tend to the sick and the injured wigglers, it is clear that she has a kind heart and wishes the best for everyone.

While Bronya is a capable leader of her fellows, she can be quite neurotic and anxious at times. This in turn causes her to have a bit of trouble delegating responsibilities to people she just met, as she has no way of telling whether said person is truly capable of handling important duties. Most of the time, she prefers to manage situations by herself. Her nervousness can also be attributed to the fact that she's not exactly complying with the basic tenets of Alternian society, seeing as she's running a nursery that's not entirely legal and may or may not harbour borderline-revolutionary ideas.

She also has a tendency to create lists of things, which probably ties in with her role as leader of the jades as she's usually the one issuing instructions and rules for her fellows. It may also hint that she prefers coordination in life, rather than being disorganized, which might impede her tasks.

Despite being one of the nicer trolls, she can become quite irate if the player harms those under her care, willing to toss the player out of a window for accidentally killing a wiggler and cursing at the player when the Imperial Drones start slaughtering anything that moved in one of the bad endings. This also highlights her protective nature, as she takes her job of taking care of the lusii, wigglers and Mother Grub very seriously.

Bronya has a jade highlight in her hair, though it is uncertain whether it is something she was born with, not unlike Eridan. Her personality is rather similar to Kanaya's, perhaps a play on the motherly and helpful nature associated with Virgo. She has a tendency to clasp her hands when excited or emphasizing something.

Bronya is the leader of her jades, and has a sense of duty to those serving under her. She is more than willing to put herself in danger to ensure that her fellows do not get harmed in any way, and does her best to keep everyone safe. She is also noted to be very proud of her jades when they come to her aid to resolve a messy situation, and has an easier time trusting them to manage difficult tasks. When her jades are placed in peril due to the Imperial Drones raining death upon everything in the caverns, Bronya is downright horrified and upset at the disaster.

Bronya used to be in a relationship of unknown quadrant with Elwurd, though the MSPA reader assumes that they used to be matesprits. At one point, they used to be quite close that Elwurd even mentions in her own route that they have talked about "requesting the same combat assignments on the same ship," in the future after the Ordeals. However, they both have trouble communicating with one another, with Bronya prying Elwurd to talk about her feelings, and Elwurd not being interested to do so. Bronya seems to be very fed up with how difficult Elwurd is to comply with her, likewise as Elwurd doesn't seem to like Bronya babying her like she would with her jades. Considering Elwurd is the one who went through the trouble of stealing Bronya's sweater and lying to her to make an excuse for Bronya to see her (and has done this repeatedly), this may imply that Bronya was the one ended the relationship with her as Elwurd is revealed to very apparently not be over her. It's unknown if they'll ever try and resolve this conflict between them or if it'll keep going like this. Considering jadebloods are not allowed outside the caverns, the existence of Bronya's relationship with Elwurd also heavily implies a more rebellious past that Bronya once had.

While Lynera's feelings for Bronya are very much flushed as shown in her volume, Bronya's view of Lynera has yet to be explored in depth. According to Lynera, the two are best friends, but aren't pale, and calls herself Bronya's second in command. Lynera consistently stalks Bronya, taking pictures of her and recording moments she's shared with her fellow jade. Bronya seems unaware of the true extent of Lynera's obsessive behavior, or if she does she chooses not to confront her about it. Bronya sticks up for Lynera in Lanque's route, after she learned of the vicious words Lanque spoke about her, and was infuriated with Lanque for dragging Lynera into his nightlife escapades.

Later down the line during Friendsim Vol. 14, it is revealed that Karako Pierot was one of the grubs that she took care of despite being a runt. Not much is known about their relationship, but Bronya made sure to place a dog tag on Karako's being in case he runs off, which he apparently does often.

Bronya isn't fond of Lanque—seemingly because she does not take kindly to the fact he is often known to sneak out from the caverns to escape his duties from the cloister to attend a lascivious nightlife, and also perhaps because of his general rudeness towards her and others. The feeling is mutual as Lanque is often annoyed with Bronya as she seems to constantly interrupt him in his nightlife affairs and by her whole "purity act," as he so claims. He calls her out on her hypocrisy, implying a history about Bronya that only Lanque seems to know and acknowledge. However, Bronya chooses to deny and/or brush aside his remarks.

Bronya holds a somewhat harsh attitude towards Daraya at times, but she does so because she is worried that Daraya's rebellious attitude will get her culled, due to her own past experiences with a jade she knew who was culled.

Though Lynera and Bronya are friends in Hiveswap Act 2 Bronya seems somewhat feed up with Lynera repeatedly attempting to speak for her. In the trial ending in which Lynera is found guilty and presumably culled, Bronya does not act greatly upset though she is sad and disappointed.

Bronya seems to care about Lanque, but has a habit of accidentally leaving him out by saying "her girls." She also dislikes his aggressive and mean spirited behavior towards Lynera. 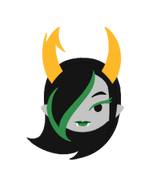 Bronya's sprite from the trial