Start a Wiki
N.B. The title of this article is a combination of two terms which have not been used together canonically, but is based on their use in the comic.

“Bronze Signs have a warm and generous disposition, but you might not accuse them of it the first time you meet. They have a tendency toward being withdrawn and slow to open up with new people. This can make them come off as arrogant and cold, like they think they are too good for everyone, although the reality couldn't be further from the truth. In fact, they crave validation and companionship. They are very open-hearted, but if a Bronze Sign decides to dig their heels in, it can be like talking to a wall. More so than any of the other sign classes, Bronze Signs have a marked love of creature comforts. They crave stability and safety, and if they have the means, their homes will be full of beautiful things. Some might accuse them of being hedonistic; they would probably just claim to know what they like. As lovers they can be quite needy, wanting assurances that the affection they feel is reciprocated. Maybe because of this, they have a particular affinity for animals. Don't try to break a Bronze's Sign's routines-they'll resent you for it, even if oftentimes they are too polite to say so.”
— The Extended Zodiac

The bronze blood caste is one of the twelve troll blood castes. It is the second lowest caste on the hemospectrum, preceded by rust and succeeded by gold.

Early in Homestuck, Tavros Nitram's blood colour is generally grouped in with other low blood colours

under the name 'rust'

, in reference to the brown coloration of oxidised iron. Vriska refers to the color

, while Tavros himself once compares it to fudge

The name 'bronze' first appears on coloUrs and mayhem: Universe A - consistent with the metallic names given to the rust and gold castes - and reoccurs on the Extended Zodiac.

Bronze blood is a dark orange colour similar to the colour of the metal copper and many of its bronze alloys.

The lifespan of a bronze blood is roughly equivalent to that of a human if not shorter. Vriska describes animal communion powers like Tavros' as “typical”

Somewhat like rust bloods, most bronze bloods seem to have long horns with simple curved shapes. Dammek and Tavros both have horns that resemble those of their lusii and the real-life animals that inspired them.

and are capable of rising to command positions among them 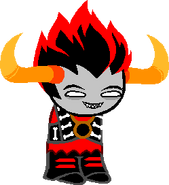 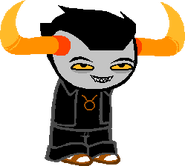