Bunnykind is a Strife Specibus used by John Egbert as well as an imp, though for only a short period of time. Jack Noir also uses the bunny as a weapon, though he does not seem to possess a Strife Deck.

All bunnies that John acquires turn out to be different versions of the same bunny due to time shenanigans. Most of them serve no function and are merely stuffed animals; only Liv Tyler and Lil' Seb are of use as weapons.

The bunny is sent to John from Dave in a red package as a present for John's birthday. It is in fact exactly the same bunny from one of John's horrible movies, as proven by its certificate of authenticity. This is Dave's way of thanking him for Ben Stiller's sunglasses, which John sent him on his birthday. When John enters The Medium, the bunny is stolen by a shale imp. The bunny is obviously very valuable to John, as the Imp holds it hostage during Strife against him. After retrieving it, John stores it in his bunnykind Strife Specibus to keep it safe.

In the Land of Wind and Shade, John reenacts a scene from the movie from which the bunny originated. He has a heartfelt reunion with his loving wife and daughter and gives the toy to Casey. However, after he drops off Casey in Rose's room, John continues on to the ectobiology lab with the bunny. He then gives this version to infant Rose during another Con Air reenactment. The bunny travels to earth with Rose and becomes her heirloom. 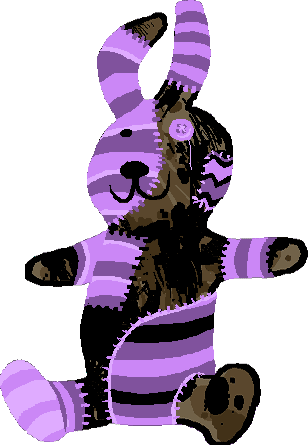 Rose repairs her heirloom by knitting parts of the bunny that had been destroyed over the years, making this version of the bunny partly woolen and purple. She planned to send it as a birthday gift to John, because he gave her yarn and Knitting Needles for her birthday. However, she is behind schedule and John ends up retrieving this version of the bunny from Rose's room before he blasts off to the ectobiology lab. At this point, he carries two different versions of what is in fact the same bunny. He gives this version to infant Jade during another Con Air reenactment.

John has no idea that he holds two different versions of the same bunny. In giving away both versions of it, he actually caused the whole time loop to happen.

This purple woolen version of the bunny is seen in 1995 with Jade as she travels with Grandpa to her island. This version of the bunny becomes an heirloom in her family as well. She patches it up with technological advancements, and with a little help from her penpal and it becomes the Uber Bunny. 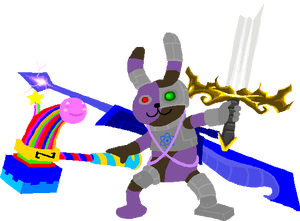 This is the final incarnation of the bunny. After Jade obtains the bunny, she sends it to her pen pal Jake. He also gives it four exotic weapons: the Warhammer of Zillyhoo, the Quills of Echidna, the Royal Deringer, and Ahab's Crosshairs, which match the Strife Specibi of the pre-scratch Kids. These weapons were created by Jake in the future, using codes provided by Calliope, and sent back in time via the Lotus Time Capsule. The bunny itself fits John's bunnykind Strife Specibus. Jack Noir uses it to usurp power from the Black Queen after the package falls into his hands. After he returns

the green package to PM, and Dream John finally receives

the package, the bunny recognizes John as its master and defends him against Jack. The Uber Bunny then follows him around on The Battlefield until Vriska wakes John up. Some time later, the Bunny travels with the Courtyard Droll. Later, the Uber Bunny reunites

with John. However it loses all of its weapons due to John's Tornado drilling, except for the Warhammer of Zillyhoo which blew back onto John's head.

The bunny has an infinitesimalator, which can shrink objects, as well as a monstrositifier, which causes them to grow (resembling Jade's abilities as Witch of Space). The two devices are linked to the bunny's eyes, green for the monstrositifier and red for the infinitesimalator. These devices allow the bunny to shrink the weapons down to its size until they are needed by others. The green eye was promptly consumed by the Wizardly Vassal and the socket covered with a Clubs eye patch.

John names the Uber Bunny Liv Tyler. Jake refers to the bunny as Mr. Terry Kiser, indicating that his taste in movies is approximately as good as John's.

The bunny goes with the Courtyard Droll and WV? on the Dersite ship on a mission to take The Tumor to Rose on Derse. The Tumor was placed inside John's Dad's wallet. CD attempted to sneak away with the wallet, but the bunny took the tumor out of it before CD left. En route to their destination, the ship was attacked by Jack Noir. The bunny took an escape pod to Derse with the Tumor while WV? went on through the portal to 2422. In the end

of Act 5, Liv Tyler was with Rose and Dave in the heart of Derse's moon when the Tumor detonated, creating the Green Sun. While Rose and Dave survived, the bunny died in the explosion

In Act 6, Liv Tyler is shown to be a work in progress laying on Jake English's table along with the letters he was writing.

Jane Crocker owns both an oily as well as a knitted version of the bunny. They were sent to her on her 13th birthday, mirroring John's birthday presents.

The oily bunny was a gift from the Roxy Lalonde, who, like her pre-scratch incarnation, has an obsession with wizards. Consequently it is dressed in a pink wizard outfit. She inherited it from her mother, who, as the post-scratch version of Rose, brought it with her to the post-scratch universe aboard her meteor during the Reckoning.

The knitted bunny was a gift from Jake English, who, much like his pre-scratch self, has a fascination with adventure. It is dressed like Indiana Jones, but Jake insists it's dressed as a detective to appeal to Jane's interests. He inherited it from his Grandma, who, as the post-scratch version of Jade, brought it with her to the post-scratch universe aboard her meteor during the Reckoning.

Dirk made this for Jane and gave it to her for her birthday. It appears to be a completely robotic bunny with Dirk's signature shades. However, within it is the bunny from Con Air, stolen by Dirk from his older brother's museum of movie memorabilia. It seems to have terrible manners, cutting up Poppop's stuffed body to reveal itself. It appears to be very fidgety, cutting up shit with its sword, and Jane hates activating it for this reason.

Dirk refers it as “dear, sweet Huggy Bear” for some reason, although this is most likely a reference to this

. Jane has since given it the name of Lil Sebastian, upon Dirk's insistence that “When pets change owners they get new names.” This would seem to be a reference to how Mutie, Casey and the Uber Bunny have experienced name changes when encountered by John and Rose. Likewise, Jaspers also got renamed when Roxy received him.

After helping Jane explore her land, Lil Seb went to Derse while it was being attacked by the Red Miles. It managed to save Jake from the Miles by taking him to the transportalizer back to Earth, but was attacked by a dragon lusus and knocked into the ocean, where it sank to the bottom. Centuries later, Earth was moved into a new universe and became Calliope and Caliborn's home planet, and later entered Caliborn's Incipisphere when he began his dead session. His mentor, Gamzee, found the rusty but still functional Lil Seb and brought it to Caliborn, and it has been in Caliborn's possession since.

The name Lil Sebastian is a reference to the television show Parks and Recreation, which Jane most likely watches due to her infatuation with Ron Swanson.

Note: Jane was given a vandalized copy of Pony Pals by Dirk with silly edits and changed characters and names. This included the name "Lil Sebastian" on the first page of the story. Probably because Dirk, being a good friend, knew that Lil Sebastian, a small horse, was a large part of Parks and Recreation. She already has the copy of Pony Pals in her Baking Chest when we meet her (later revealed to be a gift for her 14th birthday), and we actually see her rename the bunny, therefore Jane must have named the bunny after Dirk's character, and not vice versa. The allusion to Ron Swanson must have been made on behalf of Dirk for Jane.

Chronology of the Bunnies[]

Due to time shenanigans, John and Jane receive the same bunny multiple times on their 13th birthday, and all eight of the Homestuck kids have owned a version of it at some point in time. As Dave so eloquently put it, “its like a grubby baton in some huge douchebag marathon”. This details the circuitous route of its chronology.