Calliope and Caliborn's parents were a pair of spacefaring cherubs. 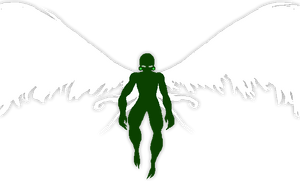 Calliope and Caliborn's mother was a benevolent cherub that had spent several eons roaming her galaxy before she eventually began searching for a mate. She was the good half of her body, and successfully predominated her brother before reaching maturity. Though she experienced personal growth after her predomination day, she would always live with a sense that her other half was missing. Aranea states that she was once similar to her daughter, but was hardened by her long years of solitude and combat.

She began tracking a male cherub's scent. She followed his path of carnage, the debris from civilized worlds and star systems he left behind. His long path of genocide made her extremely furious. She knew her quest for a mate was not just about the propagation of her species, but the liberation of billions from a monster. Once she defeated her mate, it can be assumed she took over his territory. What happened to her after is unknown.

In the files it is revealed her name is Calamity, and implied that she originated as the protector for Earth's universe, rather than being native to Universe C. Pre-scratch, she gains the nickname Calamity Jane as a frontierswoman, and she meets the Condesce in 1863 in Missouri. She fights and defeats HIC, and advises her to "stop fooling around and get to work" before riding away. In 1876, she interrupts a heist by Jesse and Frank James and takes them to jail. In the 1890s, she begins funding Karno's Army of vaudeville assassins while under the alias of the baking baroness Little Debbie. In 1957, she appears in front of Charlie Chaplin fighting Jake Harley, and watches him take Jake's son away before leaving. Calamity then appears in front of the dying Condesce in the B2 Sburb session, where she informs the Condesce that she was making sure that the conditions to fulfill the birth of her children would be fulfilled before flying up into Skaia. 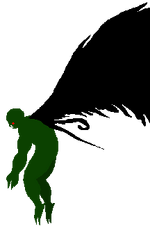 Calliope and Caliborn's father was a particularly destructive malevolent cherub. He destroyed several planets, including the one on which two particularly doomed trolls resided. In terms of personality, Aranea thinks that he was most likely motivated by little other than to conquer and destroy.

He eventually lured Calliope and Caliborn's mother to a massive black hole where the planet he was hatched on once resided. After losing the fight against his mate, he slithered away in disgrace, and deposited the egg containing Calliope and Caliborn onto the now dead and barren planet Earth. After depositing the egg, he flew away and never returned. Aranea muses that perhaps his son even went on to exceed him in violent tendencies.