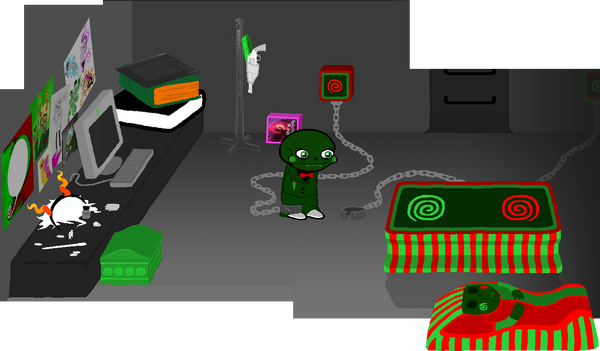 of the room while the other is Caliborn's. She has decorated one of her walls with pictures of the B2 kids and her trollsona, Callie Ohpeee.

Their room is quite a mess, probably due to Caliborn, if Calliope's words are anything to go by. Candy and meat

have been scattered throughout the room, as well as a box of 'Special Stardust', and the chessboard previously used in a game between Calliope and Caliborn has been destroyed. The ~ATH book and Rose Lalonde's guide to Sburb are piled up on her desk, with a tablet on top. She also has a Juju Chest on the floor near her desk, which contains her Juju. Interestingly both a white wand as well as an empty holster resembling the one holding Doc Scratch's pistol can be seen, as her weapons of choice are wands and pistols, recalling Calmasis and Scratch respectively. Aside from the aforementioned illustrations, Calliope additionally has a cryptic drawing

, and later a dream bubble

where Roxy and Calliope talk.

The contents of Caliborn's side of the room have not been revealed. 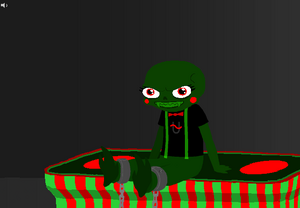 At the center of her room is the sarswapagus, a sarcophagus-like bed used by the cherubs Calliope and Caliborn that allows them to swap possession of their shared body. The face of the sarswapagus is similar to that of a certain puppet, as well as provides one of a myriad of links between Caliborn and the Saw films. Additionally, their sarswapagus evokes obvious images of Lord English's Cairo Overcoat.

, the Sarswapagus has 2 swirling patterns, one green and one red, in fact, each spiral occupies precisely the negative space of the other, forming a perfect circle when the two are overlaid, much like their combined Jujus. The sarswapagus's swirls are identical to the ones on Calliope and Caliborn's cheeks.

, Caliborn's cheeks turn to red swirls and then, after a moment, his cheeks AND both symbols on the sarswapagus all change to pure red circles. This may be interpreted as both "halves" of their shared body becoming red, so to speak, indicating Caliborn taking full control by killing his sister's dream self.

to be on the top of a building on the Trolls' meteor, which flew through a Skaian defense portal in the B2 Sburb session and crashed into Earth during the A6A6I1 Flash. The location on Earth is near multiple

Future Earth revolved around a supermassive red sun, transported there by Jade. Because of Calliope's and Caliborn's connection to red and green it could be an indication of Caliborn's dominance in the area. When Caliborn entered his dead session, Earth got sucked into the Medium, becoming one of his planets.