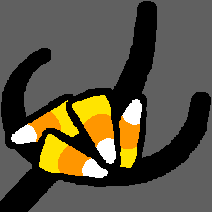 Coveted candy of Problem Sleuth, candy corn is more precious than life itself. Problem Sleuth keeps his candy corn stored safely in his hat, and will never give it up willingly. It appears that candy corn is the most powerful of candy, and when made into a liquor it was more than enough to overwhelm Pickle Inspector's impressive Imagination, enabling an obscenely powerful set of Battle techniques and Combat Operandi. It can be used to do the sinister attack known as Candy Corn Vampire!

Candy Corn can also be used in Gambit Schema.

The candy corn was obviously stored back in Problem Sleuth's hat after the Candy Corn Vampire Gambit Schema expired. Andrew Hussie obviously felt that this didn't need to be stated since the player definitely knows of the preciousness of each and every candy corn.

The ultimate sacrifice was made later when PS used the candy corn to defeat DMK.

. Additionally, the trolls in Homestuck are seen to have horns that resemble Candy Corn in coloration.

The Midnight Crew also store their favorite candy in their hats, although they never actually use it for anything.

The links on the top border of the MSPA site is divided by four pieces of candy corn. After breaking some of the MSPA site with a familiar weapon, Caliborn uses one of these to replace his missing tooth.

Caliborn jams some candy corn into the ACT 6 ACT 6 SUPERCARTRIDGE EXPANSION PACK! along with Special Stardust which causes the B2 session to become glitchy. One of these pieces of candy corn is visible as John flies around the damaged planets at the beginning of Act 6 Act 6 Intermission 4.