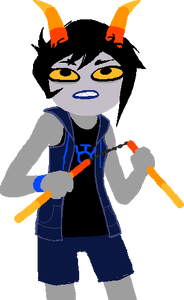 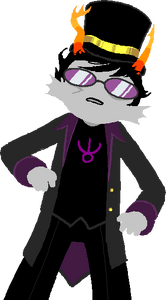 While Andrew Hussie jokingly announced that all fantrolls are canon, the true canon fan trolls are trolls created by fans that actually appear in Homestuck. The requirement to be canonized was for their creators to donate $10,000 to the Homestuck Adventure Game Kickstarter. Two backers actually pledged to this reward tier, each paying $10,000 to the campaign, but unfortunately, since neither of them donated to the next tier up, $100,000, their fantrolls were not guaranteed to survive for more than a single panel.

and, as expected, lasted for exactly one panel before their entire planet was obliterated

by a cherub later revealed to be the father of Caliborn and Calliope. Their names, Trollian handles, and other background information were not revealed in-comic. As the post-scratch iteration of Earth was shown to be in the same universe as them, they exist elsewhere in Universe C after the fall of Earth but before Caliborn and Calliope's birth.

As of March 26, 2015's Kickstarter Update #18 for Hiveswap, art assets depicting the two fantrolls shown by Andrew have indicated that they may appear in the game.

On January 10th, 2018, What Pumpkin announced that the grand prize winner of the Hiveswap comic contest would have their fantroll canonized as an NPC in Hiveswap.

On April 13th, 2018, What Pumpkin announced the grand prize winner of the Hiveswap comic contest getting their fantroll canonized is fefsprites.

Retrieved from "https://mspaintadventures.fandom.com/wiki/Canon_fan_trolls?oldid=224608"
Community content is available under CC-BY-SA unless otherwise noted.