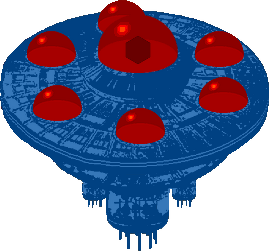 The Catenative Doomsday Dice Cascader is one of the most deadly weapons that can be conjured. It uses loathsome POPAMATIC BUBBLE TECHNOLOGY to generate a random amount of damage on foes.

The Dice Cascader features one Prime Bubble and six empty Catenator Crucibles. The Prime Bubble is pressed first, and its result determines how many crucibles will be used for the damage calculation. The first cascader is then pressed, and each remaining cascader die is multiplied by the result. This process continues until only one cascader is left. The final Doomsday Cascader triggers the weapon to deal damage equal to the result of its die roll. The damage formula is therefore

near her hive. The device is accidentally activated

by Equius Zahhak when he beats up one of his robots. After activating, the machine immediately breaks and does nothing. However, two of the chains suspending it break, causing it to crash into Equius' mesa. The resulting explosion caused a large chunk of the mesa and Equius' house to fall onto Vriska's lusus, mortally injuring it and killing Equius' lusus, Aurthour.

After John connects with Jade, a device that looks extremely similar to it appears in the Registry. It is unknown what this is used for, but it may be a weapon too, or otherwise a tunneling device. It is suggested that the device was alchemized with the WARHAMMER OF ZILLYHOO to make the POP A MATIC VRILLYHOO HAMMER.

This result is believed to have been caused by Professor Wasp's meddling.