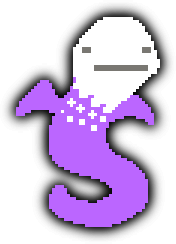 Cetus is Rose's denizen of the Land of Light and Rain and Vriska's denizen in the Land of Maps and Treasure. She is most likely connected with the Light aspect, since the two known instances of her were both assigned to Light players.

If the Denizen looks like Rose's browser icon, then it should be noted that she shares skin color with Rose's consorts (and is lavender, which is Rose's typing color) and looks like a half-human, half-fish (?) monster with two fins, one tail and a white head.

Cetus' browser icon looks least human and most monstrous of all the Denizens: Echidna's has a white human torso with breasts and head (perhaps, lacking arms) with two snake tails on its bottom; Typheus' has a white torso with head and a snake tail on its bottom; Hephaestus' browser icon version is engulfed in flames, but seems to be humanoid with a black torso and black head, making him most human, and Cetus' has a fish body with a white human-like head. This would relate to Rose Lalonde's strong connection with The Noble Circle of Horrorterrors, and to her actions, which seemed to be the least human and most reckless of the kids.

Not much is known about Rose's version of Cetus except that she has eaten every living thing in LOLAR's waters and subsequently taken a nap. The reason for our lack of information likely stems from Rose's refusal to follow the paths laid out by the game. This version of Cetus is likely aquatic. Curiously, the meteor carrying baby Rose also killed all aquatic life in a nearby lake.

. This forms a parallel with Rose, the other hero of Light. In that session, Cetus's lair was located deep underground, amidst a great number of shipwrecks. Vriska killed her session's Cetus, who spoke in "riddles" to Vriska even as she attempted to kill Vriska. It is possible that Cetus initially intended to impart some information to Vriska instead of fighting her. The truth is unknown, as Vriska did not listen to Cetus very closely.