no capiTalizaTion excepT for The leTTer T.

take me to clown church ♫
Chahut Maenad is a young Alternian troll living in Outglut during the time period of Hiveswap and Hiveswap Friendsim. Chahut was first revealed during the Hiveswap Troll Call event alongside Nihkee Moolah on November 29, 2017. Chahut later went on to be featured in Hiveswap Friendship Simulator: Volume Nine alongside Azdaja Knelax. She appears to be a subjuggulator, much like The Grand Highblood and bears a striking resemblance to him. Her bullet points were "2 weeks from exile", "single and ready to mangle" and "loves to scrapbook!" She was designed by Shelby Cragg and Adrienne Garcia. Her bullet points were one of the only ones to remain unchanged as from December 6, 2018.

Chahut in French literally translates to words such as "noise", "uproar", "pandemonium" or "rumpus", also being the French word for the can-can. Her surname is a reference to the maenads (translating to "raving ones") of Greek mythology, female followers of Dionysus who participate in mad, drunken rites in the god's honor.

Chahut is a purpleblood who preaches in Clown Church, and is also a good friend of Amisia Erdehn. Prior to the events of Hiveswap Friendsim: Vol. 9, she is mentioned to be the one helping Amisia behead trolls as to collect their blood for paint. During the events of Hiveswap Friendsim: Vol. 9, Chahut approaches the MSPA Reader when they are busy talking to Amisia. Chahut pleasantly greets the player, but winds up squabbling a bit with Amisia over hypocrisy regarding murder jokes. Once the two are done settling their dispute, Amisia insists that tonight's hunt would be a good one. Chahut then informs the blueblood that there's a scheduling error (she has to attend Clown Church), much to Amisia's exasperation. Instead of strifing for a decision like they usually do, Chahut instead allows the player to decide for them.

If the player decides to attend Clown Church with Chahut, Amisia will grumble about the sheer boredom of the activity and take her leave. The player is at first apprehensive of making an appearance as they're obviously an alien, but Chahut reassures them that no one, not even the seadwellers, would dare mess with the player with Chahut by their side. As it were, Chahut leads the player to the destination and begins doing her bit of preaching while her fellow purplebloods go wild around her. As the player is unable to fully grasp what is being said, they zone out a bit until they notice that everyone is staring at them. Chahut hands the podium to the player, warning them not to mess things up.

If the player wimps out and only manages a pitiful croak, Chahut will comfort the player and offer them a seat. While things get rowdier in the background, the player accepts a bottle of Faygo from another clown. Upon noticing the second clown's hand on the player's thigh, Chahut snaps at said clown to sod off. Before the two could get into a full-blown argument, the portrait on the altar shifts into a Skype screen of sorts. Everyone in the building is stunned into silence, and Chahut is visibly frightened by the booming voice. The Grand Highblood asks the player several questions regarding their stay on Alternia, then instructs Chahut to hang with the player more often on account of their stellar survival skills. The moment the call ends, the player leaves the church for some fresh air, Chahut trailing after them. Chahut informs the player that she's not upset by what took place, instead asking the player to teach her their ways as the player had managed to gain the approval of the figurehead of her church. Delighted, the player begins chatting with her as they walk off.

If the player blurts that church sucks, Amisia will heartily agree with the player's statement. Chahut briefly looks murderous, but in the end she just shrugs and goes along with the plan. As the player is poorly dressed for an upward hike, Chahut picks the player up and hoists them over the hill easily. Chahut sets the player down by a stand of trees, and Amisia reappears to show the bronzeblood she'd captured with a trap. Before the player could process how messed-up the entire scene is, Chahut raises her axe and decapitates the victim with a single blow, the severed head of said bronzeblood rolling to a stop next to the player's feet. Chahut and Amisia give the player expectant looks, but the player storms off instead, completely fed up with the bloodthirsty nonsense on Alternia.

Should the player begin preaching despite not knowing what to say, they will make several references to the Bible even though they're aware that the audience wouldn't understand much. As it were, the clowns go with it and drink Faygo from a communal chalice, providing the player with a great sense of relief. Chahut expresses her approval for the player's speech, then invites them up. Whipping out cans of spray paint, Chahut begins to spray the player in the face, making sure not to get the stuff on the player's mouth. The player is delighted to be accepted into someone's inner circle; Chahut admiring the spirit coursing through the player. Suddenly the player realizes that they're not being sprayed with paint; it's troll blood. To make things worse, Chahut had accidentally sliced the player's forehead open, getting crimson blood all over her fingers. The player is still holding out on the hopes that they would get to be friends with someone as awesome as Chahut, not noticing that she's leading them to a bare spot in the church. Only too late does the player understand how unfavorable the situation has become, and Chahut casually informs the player that being offered up as a sacrifice is the highest honor the church can bestow on someone.

She makes a brief appearance in Hiveswap Friendsim: Vol. 17, attending Elwurd's party and thereby bumping into the player and Daraya. Chahut spends the next few moments observing the jadeblood with interest, casually remarking that it's very dangerous for Daraya to be so far away from her peers. Before things could get any more awkward, Chahut claims that she was just joking and leaves.

Chahut is a preacher in Clown Church, and does a stellar job of rilling the crowd up with her words. She also appears to be a significant presence in said church; all she needed to do was smirk at the preaching troll onstage to make him scamper off so that she may take his spot. As it were, she is capable of managing the crowd on her own, and captivates her listeners easily. She is also noted to be quite devoted to her religion, informing Amisia that being able to praise her messiahs is a privilege and a revelation.

She is noted to be quite laid-back, not getting particularly angry even when insulted by others. This is best illustrated when Amisia throws a barbed comment about Chahut's profound love for Clown Church; instead of getting furious with the blueblood for saying such a thing, Chahut merely reminds Amisia that being able to sing the Mirthful One's praises is all that she lives for. Another example would be when the player exclaims that church sucks, Chahut just gives the player a steely look before going along with Amisia's initial plan. Even though Chahut is indeed annoyed with the player for insulting her religion, she mostly uses passive-aggressive behaviour to unsettle the player as opposed to lashing out.

Despite her frightening appearance, Chahut still has a soft side to her. When the player is unable to preach to the crowd, she sympathizes with the player's nervousness and offers them a seat so that they don't strain themselves. She also snaps at a clown to stop macking on the player, clearly defensive of the player's wellbeing. As mentioned in her Troll Call card, she enjoys scrapbooking with Amisia (even though the process of getting paint can be quite gory).

Interestingly, despite being a preacher in Clown Church, Chahut is noted to ignore most of her fellow purplebloods. The player notes that she only greets a few of them in a casual manner, paying no attention to the rest. This might be due to the fact that she's set to be exiled in a few perigrees, and sees no point in establishing more friendships. It should be noted that the player ponders on the possibility that Chahut believes herself to be superior than said clowns. Chahut regards seadwellers with open disdain, referring to them as 'slippery fishes'.

Chahut doesn't seem to relish the idea of being sent out to space to do the Empire's bidding, welcoming the notion of being culled just so she could be absolved from her obligation. This might be due to the fact that she mentions those out in space don't 'follow the good word as close as they should'.

Chahut has a close relationship with Amisia, and gets amused when their relationship is mistaken for a moirailligence, towards which Amisia proclaims that she's too young. The two get along well; bonding over their love of art and scrapbooking. The two of them would occasionally argue about Chahut's devotion to Clown Church, but that does not put any real strain on their friendship as Amisia understands, even though the blueblood is evidently unimpressed. Chahut also mentions that she and Amisia would strife to make decisions, so the two could be considered sparring partners.

Apart from that, Chahut has a relatively good relationship with the clowns in Clown Church. Even though she does not pay each and every one of them attention, she is well-liked regardless and commands respect from the lot of them.

In Hiveswap Friendsim: Vol. 17, Chahut becomes quite fascinated with Daraya for it's very rare to see a jadeblood venturing out so far from the caverns. She appears to menace Daraya a bit, stating that it's dangerous to wander away from one's brethren and not tend to one's responsibility. Even though Chahut later dismisses it all as a joke on her part, she has effectively frightened Daraya away from attending the party (whether this is intentional or not is left unclear). 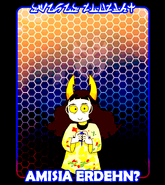 The previous select screen with brightness, curves, and exposure modifications.

Chahut on the character select screen after she is revealed (right).