This article is about the image element format that is also a game mechanic in Homestuck. For the quest guides in Sburb, see Sprite.

A character sprite is a reusable image used to portray a character. At some points in Homestuck, characters can be aware of their sprite and its orientation, which can have mechanical consequences in-universe.

In MS Paint Adventures, character sprites are the default medium through which characters are portrayed. Each character has a set of basic sprites depicting them performing different actions of expressions, that can be reused and customized as needed to portray different outfits and other unique circumstances. This saves time when creating panels, and is also, appropriately, the most common method used to render characters in 2D video games. Sprites are used fairly universally in MSPA when a character has not been drawn in a custom pose using Hero Mode or Hussnasty Mode.

A spritesheet for an MSPA character is typically drawn up with only one sprite for each orientation (left or right) of the character. This means that any asymetric aspects of a character sprite are flipped horizontally when the sprite itself is flipped to make a character appear to be facing left instead of right, or vice-versa.

This particular property is acknowledged in-universe in Homestuck, and as such has mechanical implications. In the Homestuck intermission, this property is first brought up when Spades Slick has one of his eyes stabbed out by Snowman.  When communicating with Diamonds Droog in order to force Stitch to repair the wound by sewing up Slick's effigy, he is accidentally stitched across the other eye

The mechanic resurfaces at the end of the Intermission, when Slick is attempting to access the trapdoor in Lord English's vault in Felt Manor. Locked inside the vault, Slick is initially unable to open the Spade keyhole/barcode reader as his rules card for blackjack was shot through by Snowman, and his arm bearing his barcode tattoo was ripped off in the same sequence. However, by flipping his sprite

, he is able to reverse the location of the missing arm and barcode tattoo, as the barcode tattoo is apparently an exception to the usual asymmetric flipping of reversed sprites, and always appears on his left arm regardless of his sprite orientation. This therefore allows him to access the vault with his tattoo. In this scene, the action of flipping a sprite is referred to as flipping it turnways

Throughout MSPA, multiple different styles of reusable sprite are used.

Standard sprites are the most widely used style of sprite throughout MS Paint Adventures. Characters are typically depicted in a simple, stylized manner, with stick legs and arms, with arms only visible when they are not hanging by the character's sides. In earlier MSPAs, these sprites were almost universally white with black outlines and no colour, although in Homestuck including coloured elements and fill-colours other than white became common.

These pixellated sprites were used in the Alterniabound family of walkaround flashes in Homestuck, and some non-flash pages that mimicked them. The simplistic pixel sprites are reminiscent of those found in older video games. They are referred to as "walksprites", to differentiate these overworld sprites from the Alterniabound talksprites.

Found in both the Alterniabound and Openbound walking animations, these sprites are used to accompany speech textboxes, in a similar manner to many video games. They depict characters from the torso up, usually with varying expressions and mouth animations.

The overworld sprites from the Openbound walkarounds are similar to those in Alterniabound, but have a distinct style that depicts characters as taller and less squat. As well as being used in the three

, these sprites appear elsewhere during Act 6.

When Caliborn takes over the Homestuck narrative, he creates his own "parody" versions of Homestuck's standard sprites, to be used in his own story known as "HOMOSUCK". These sprites are similar to the standard Homestuck sprites, but are drawn to be "shittier", and resemble the sprites

The various MSPA-related video games also have their own sets in character sprites in various styles.

Hiveswap features sprites that are reminiscent of the standard sprites from Homestuck, with slightly more fluid lines and proportions.

A sequence of Joey Claire's sprites from Hiveswap.

The Hiveswap Friendship Simulator and Pesterquest volumes feature sprites for each featured character, in a new style.

Character sprites in a screenshot from Openbound. 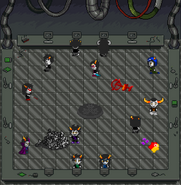 Various standard character sprites as seen in A6A6I5.
Retrieved from "https://mspaintadventures.fandom.com/wiki/Character_sprite?oldid=232382"
Community content is available under CC-BY-SA unless otherwise noted.