Breaks up sentences into multiple lines. Takes a lot of pauses. Ends most sentences with two periods..

Charun Krojib is a young Alternian troll living in Outglut during the time period of Hiveswap and Hiveswap Friendsim. Charun was first revealed during the Hiveswap Troll Call event alongside Amisia Erdehn on December 20, 2017. Their bullet points were "lost and found artist", "eats worms in their cave, not as bad as it sounds", and "deconstructively organized". They were then featured alongside Wanshi Adyata in Hiveswap Friendship Simulator: Volume Fifteen. While set to appear in Hiveswap: Act 2 and being featured in the first trailer, they were cut from the game and only their cave appeared. They were designed by Poinko.

Charun is the name of a psychopomp (one who guides the souls of the dead) in Etruscan mythology, based on Charon from Greek mythology (the ferryman of the underworld). Krojib could be a backwards Trollification of the Icelandic surname Björk, meaning "birch"; it is also the surname of Philip Reese Bjork, an American geologist and paleontologist known for his work in unearthing dinosaur species in America.

Charun's concept name of "Gatherer" references their tendency to gather materials to make art with.

Charun is an oliveblood artist that makes art out of junk. In the events of Hiveswap Friendsim: Vol. 15, they are first seen trying to take a giant lens from the MSPA Reader's dwelling. Unfortunately for them, they get stuck and the MSPA Reader has to help them out. When the player asks what the lens is for, Charun informs them that it would be used for art.

If the player comments that Charun's art is pretty weird, Charun will agree before conversation grinds to an awkward halt. Should the player offer to help Charun take the lens back to their hive, the oliveblood leads the player inside. After an awkard exchange, the player admits that they don't know much about art, so Charun offers to help. Charun allows the player to have a go at making their own artwork, only cautioning the player away from completed artworks. However, Charun isn't particularly impressed with the player's first attempt at making a piece, saying that they put too much thought into it. Heeding Charun's vague advice, the player tries again. This time, Charun is inspired by the player's work and joins in. While Charun is initially dismayed to see their food get used as the player's finishing touches, they quickly brush it aside, citing that they could always find something else to eat. The player and Charun share a happy glance, marvelling the amazing thing they've created together. Curiously, the ending panel depicts Charun and the player in the player's scuttlebuggy, even though there was no previous mention of it.

Should the player offer to help Charun search for more portable trash, Charun takes you to a river that serves as a garbage disposal site. After introducing themselves, Charun begins searching for items of use in the heap. The oliveblood eventually points out a new hideout tucked away in a corner, the player venturing inside to investigate. Not being able to get a word in edgewise with Azdaja and Konyyl arguing so ferociously, the player returns to Charun's side. Charun tells the player that they've found something incredible, but the player gets nervous upon learning that said object belonged to the two hired killers. Not paying the player's words any heed, Charun merely instructs the player to distract and stall the two quarrelling trolls so that they don't see Charun stealing their stuff. Before the player can protest, Charun runs off, leaving the player to auspiscize the two assassins on their own.

Charun is shown to be very relaxed and laid-back, showing few changes in emotion when interacting with people. When the player finds them in their home, Charun isn't all that surprised to see someone occupying the seemingly abandoned place. After the player asks more relevant questions, Charun reveals that they were after an old lens, but got stuck in the process of retrieving it. Even though they are trapped in a tight confine, they didn't exactly bother to ask for help, even when the player is standing right before them. They are also noted by MSPA Reader to speak in deep, regular voice, which threatens to lull the player back into slumber. They also appear to be perpetually tired, given their slow manner of speaking and overall sluggishness. Upon being freed, Charun thanks the player for lending a hand, but state that they can't quite leave yet as they are too tired and hungry to do anything. They later mention that foraging for food in the garbage takes quite a bit of effort, which might explain their fatigue.

Charun makes art out of different items of junk they find, and seems somewhat defensive of their work. When the player describes their art as 'interesting', they aren't pleased with the player (for that's what other people say when they don't have anything good in mind) and flat out ignore them after that. They view art as "dicking around" and they oppose overthinking the entire process, taking a laid-back approach to it, just doing what "feels right". However, they aren't exactly in favour of not thinking at all or relying too much on instinct; saying that creating art requires a balance of both to achieve something truly astounding.

They are also noted to have odd whims: Charun never bothered interacting with the player simply because they didn't feel inclined to socialize, and insists on pocketing Azdaja's and Konyyl's tracking device because it would serve as good art material. Even though the player tells them that stealing is a bad idea, Charun merely tells the player to stall for time so that they could keep the object to themselves. They later abandon the player to deal with the aftermath, showing that they aren't one to really value relationships.

Charun lives very close to the MSPA Reader, and mentions that they have seen them before. Despite the short distance, however, Charun hadn't bothered to interact with the player as they simply didn't feel like it. 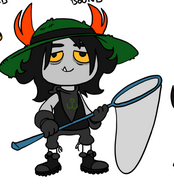 A proto design of Charun.