Characters in Homestuck and its spinoffs use various applications to communicate with each other across the internet. Despite different branding, many of these appear to be fully compatible with each other, users of one client able to contact users on another client and vice versa. Users of these clients tend to go by invented handles rather than their real names. 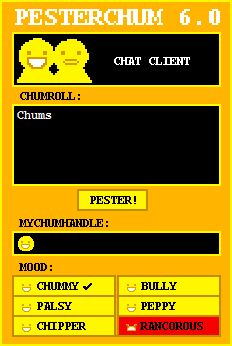 Pesterchum is the client of choice for the kids, with the exception of Jane Crocker, who uses BettyBother. Users are called "chums" and chatting is referred to as "pestering".

Pesterchum has a ChumRoll for storing a user's friend list and a trollSlum that blocks listed users from contacting them. A user can also select their current mood from a list of emotions.

Three different versions of Pesterchum have appeared in the story:

Dirk Strider and Roxy Lalonde use a special version of Pesterchum provided by Calliope. The client has been modified with alien technology (likely related to the software that powers Trollian) that lets them communicate with Jane and Jake. Whenever a message is sent from 2424, Jane or Jake will receive it at the corresponding time in 2011, creating the illusion that all four kids live in the same time period.

In real life, a working, fan-made version of Pesterchum is available here, albeit without Dirk and Roxy's models' past messaging capabilities. 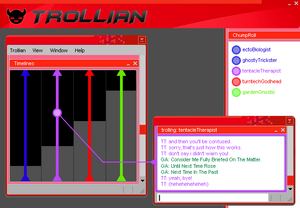 Trollian is the troll version of Pesterchum, the name likely a reference to the real-life Trillian instant messenger client. Its users "troll" each other, and like Pesterchum, users choose pseudonyms, called "troll tags." In the trolls' cases, these generally relate to their associated zodiac sign or other defining trait. Together with the Kid's handles, their abbreviations comprise all sixteen possible combinations of genetic bases.

use Trollian, they themselves are listed on it in addition to all the other trolls. Whether this is a part of Trollian or their personal preference is unknown.

In Hivebent, Karkat tries out the beta version of Trollian in order to talk to the other trolls, all of whom seem to already have it.

Trollian has the ability to chat with a person at any time on their timeline up to their death or other obscuring event (such as interference by void powers). It has also been shown to possess the ability to communicate with the kids in the universe the trolls created, as well as access a visual feed of them by using the viewport activated by the f1 key, though loss of this key

has a tendency to render this feature moot. Consequently, the trolls claim to be able to see and chat with the kids at any point in their timeline, though they later admit they cannot see or talk to

the kids after the scratch, seemingly because the scratch erases them completely.

Blocks employed by the kids seem to have no effect on the trolls. Whether this is an inherent feature of Trollian's superiority or the work of a certain hacker is unknown. It is possible for the trolls to effectively block each other however, as seen when Terezi's trolltag is blocked by Karkat

due to Gamzee earlier using her glasses, and she receives the error "did not receive message" when attempting to contact him. Eridan also states that Vriska blocked him at some point in time.

Since the trolls' contact information remains in Pesterchum, it is also possible for the kids to initiate a chat. However, several times this has resulted in them contacting a totally different time than they intend to, as a result of Pesterchum's inability to select a specific point in time they want to contact.

Trollian also has a bulletin board function

that's main function appears to be conversations between more than two people, similar to a party-line, and is both visible and respondable to users in both the past and future. Karkat abuses this function in a notably hilariously self-defeating manner, to the point of repeatedly banning himself from different points in the timeline. The length of a ban is unknown, though in this conversation

Karkat repeatedly gets banned by Terezi yet quickly begins responding again, each ban spanning only about 1–3 minutes. Considering the memos are designed for temporally distant conversation, drastically impermanent banning makes a decent amount of sense, as a ban too long would essentially be banning multiple users (albeit all the same person), not all of whom might need banning. Since Trollian allows for different temporal versions of the same user to interact, it comes with a feature to create private boards. The only seen use of it so far was from Aradia

To manage Trollian's ability to send messages through time, it displays an arrow-shaped timeline for each user. The interface also includes grey bars, behind each arrow, that indicate when each person on the timeline entered the Medium. When an individual time-travels to create a stable loop or arrives in the alpha timeline from a doomed timeline, Trollian displays each loop and doomed self as different timelines

and splits them into different shades. A bright color indicates presence, while timeframes in which a player was not present due to time travel are displayed in a darker color. If a doomed timeline copy of a player dies, their timeline will turn dark grey after the point of death. Why the screen never appears totally overwhelmed with the timelines of the doomed Aradiabots is uncertain, perhaps because this graphic only opens when trolling the individual, or must be activated similar to the viewport.

Trollian displays the scratch as bright lights and swirling black and white lines. Curiously, when Kanaya scrolls up into the future of the trolls' timelines, she sees the exact same swirls and lines, despite the trolls' session not undergoing a scratch at the time. In this case the swirls and lines might indicate the trolls' escape into the Furthest Ring, where space and time are unstable.

. Jade is able to make contact as well, as is seen here

BettyBother is a Crockercorp chat client, albeit potentially only existing post-scratch. Jane Crocker uses it even though she clearly shows contempt towards it and outright says Pesterchum is better; brand loyalty is a powerful thing. Her friends use Pesterchum instead, however, so it appears there is cross-program compatibility between BettyBother and Pesterchum, much like Trollian. While Pesterchum labels chats as "pestering" Bettybother uses the term "bothering" instead.

The cherubs, due to their unique alert messages, “cheering” and “jeering” respectively, may be using a different chat client than the others. Given its demonstrated time jumping ability and viewfinder of the post-scratch kids, it can be assumed that it is in some way related to Trollian, however, by at least shared technology. Gamzee's influence in this situation is uncertain.

Rebelgram displays messages in angular speech bubbles, which appear to be "spoken" from an avatar icon representing the sender. Message text color is white for all users, but users can have different fonts and background colors for their message bubbles. Rebelgram does not display sender screen names or timestamps for messages. Users can transmit pictures through Rebelgram; Joey uses this function to send Xefros a selfie in order to prove to him that she really is an alien.

It is presumed by Dammek and Xefros that the Alternian authorities can monitor normal communications on Rebelgram. In his conversations with Joey, Xefros repeatedly expresses concern about talking to her using it. He later receives software called "Scratchware" that claims to protect "messages to and from [his] device...from third-party surveillance." Upon installing the software, he receives messages from an unknown sender explaining the purpose of the software, and confirming Xefros's acceptance of its terms of use. After the Scratchware is installed, a white lock on a green background appears in the upper right corner of the Rebelgram screen.

It is likely that it was Doc Scratch who sent Xefros the Scratchware, given their choice of icon (a white circle resembling a cue ball) and background color (a shade of green similar to that used as a background color by Doc Scratch), their formal manner of speech that hints at time travel, and the name of the software program itself. This would be consistent with Doc Scratch's admitted history of meddling in Alternian affairs.