Complacency of the Learned is a story about wizards written by Rose Lalonde and her post-scratch self. Pre-scratch the story was a work in progress recorded in Rose's journals; post-scratch at least six volumes were released, all fairly long doorstoppers, and the series was considered a huge literary success.

The pre-scratch version of the story is an allegorical retelling of the events of the A2 Sgrub session. Both Doc Scratch and the Writ Keeper were shown to have an interest in this version.

The post-scratch version directly relates to Lord English and the Condesce and was written as a passive aggressive taunt to the Batterwitch. A poster of what is presumably the cover hangs from the door of Roxy's room and features a caduceus on it.

The Learned were a group of twelve wizard elders.

The Disciples were a group of twelve children who were apprenticed under The Learned, before eventually rebelling against their Complacency due to being corrupted by knowledge. 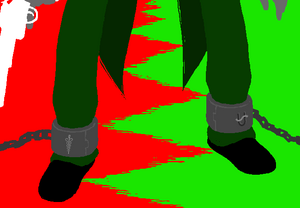 The books' main story is focused on Calmasis' efforts to kill all members of the titular "Complacency of the Learned", a group of elderly wizards led by Zazzerpan. All twelve are killed but Zazzerpan himself, forcing a showdown.

The cover art above depicts the final chess match between Zazzerpan and Calmasis. It has many similarities to the events on The Battlefield, such as becoming checkmated and eventually losing The King but not ending the game. This seems to reference a game of chess between Calliope and Caliborn in which Caliborn seems to lose his king, though he reveals it to be his queen in disguise. This enables him to win against Calliope, who, like Zazzerpan, had never previously been beaten. The chess pieces Calliope uses also closely resemble the appearance of the two shown on the cover of Complacency of the Learned.

Aside from the level of completion it is unknown how, if at all, the plot differs between the pre- and post-scratch versions of the story. However some of the symbolism of the story may suggest differences between the versions. In the pre-scratch version it is stated there are twelve Disciples who are meant to symbolise the trolls, however it is never stated how many disciples exist in the post-scratch version. The only named disciple, Calmasis, who is symbolic of Calliope and Caliborn, who are in turn symbolic of theories about a 13th troll, may suggest a different number of disciples between the two versions.

Retrieved from "https://mspaintadventures.fandom.com/wiki/Complacency_of_the_Learned?oldid=246296"
Community content is available under CC-BY-SA unless otherwise noted.