Conditional immortality is a term used to describe the rules governing the life and death of Sburb players who have ascended to the god tiers. The basic principles are first described by Doc Scratch in a conversation

The revival process is not instantaneous, but it is unclear exactly how long the delay is, whether it varies, or why there is a delay at all, given that the judgment appears to be made almost as soon as the death occurs.

In the A1 trolls' session, Meenah Peixes made intentional use of the delay to avert revival, by killing all twelve players

right before the session was scratched. This was timed such that the god tier players among them (Meenah included) would not have time to revive before the scratch activated, thus allowing them to persist as ghosts in the dream bubbles rather than being erased with the session.

The Heroic and Just judgments are defined "[b]roadly, mysteriously, and according to the case of the individual." Generally speaking, a Heroic death will result if the player was killed while opposing a corrupt adversary, or in an act of self-sacrifice for the greater good. By contrast, a Just death results if the individual is directly responsible for terrible actions, or if they have been subject to corruption by a villainous influence. Scratch stresses that these labels only apply to god tier players; when Rose asks him what sort of death he would have, he responds that he will not have either, as he is not a god.

The exact rules governing whether a death is Heroic, Just, or neither are not known, and Andrew Hussie has noted in a news post that he never intends to codify a complete list of rules. He does, however, indicate that they are closer to being hardcoded rules of the game than moral judgments, by pragmatic necessity in enforcing them.

On the subject of "close calls" in the judgment, Hussie remarks that:

There's reason to think there is a nuanced scale ranging from Heroic to Just inside the clock. There may be many shades of justice and heroism, some forms just barely qualifying to seal one's fate. But there's nothing nuanced about Alive vs. Dead. The result of a coin flip is absolute, even though there may be many subtle factors contributing to which side it lands on. Such as whether the coin is pure of heart, and whether the table it lands on has ever killed a man.

He then goes on to discuss some close calls, and what factors affected the results of those cases. In addition, he goes into detail on the difference between John Egbert's intent to avenge Dad and Mom's murders by Jack Noir (which was judged neutral), and Rose's intent to avenge Kanaya Maryam's disintegration by the Condesce (which was judged Heroic).

One of the determining factors for a Heroic death involves taking an actual step of action (no matter whether it succeeds) against such a corrupt adversary. Heroic intent alone isn't enough, which is why John's death while fighting Jack Noir

didn't permanently kill him. Presumably, the same applies to earning a Just death: villainous action must be taken. Although it was previously suggested

that a Just death must occur at the hands of a hero, the subsequent deaths of Jane Crocker and Aranea Serket, respectively killed by Aranea and the Condesce, proved this was not the case. Similarly, sacrificing one's own life to save an arguably villainous person can count as Heroic, as shown when Jake English sacrificed himself for Jane.

Hussie specifically clarifies that revenge-driven action is not disqualified from being judged as Heroic, as that would simply be too big of a loophole to exploit. This is because it would lead to any vengeful hero – which villains' atrocities have a habit of producing – being completely impossible to permanently kill as long as the villain remains alive.

Receiving mortal injuries under Heroic or Just conditions is enough to make the judgment count, even if the player survives for a short while before succumbing to them.

Scratch keeps a grandfather clock, with a pendulum ticking between

the Heroic (in Prospit colors) and Just (in Derse colors) halves of the clock, while displaying the aspect symbol of the player in question. This clock is later confirmed to influence the outcome of god tier deaths, although there is uncertainty over whether Spades Slick's use of a juju breaker on the clock while it was arbitrating

There have so far only been seven permanent deaths of god tier players shown in-comic. In addition, numerous doomed timeline ghosts of players have been seen as gods, but how they received their permanent deaths is still unknown. However it is possible that the cessation of their timelines is enough to ensure their deaths beyond the two normal criteria for permanent death, or that even remaining in the doomed timeline counts as Heroic, as it allows the alpha timeline to continue. However, in contrast to that, a doomed version of Calliope eventually died

before becoming a ghost, rather than waiting for the timeline to fade away.

Otherwise appropriately termed "revivals", these deaths were neither Heroic nor Just, and thus the god tier player revived shortly afterwards.

It has been implied that most if not all of the various forms of invulnerability or immortality offered by paradox space are fundamentally connected, though very few details on this subject have been explored so far in canon. When cherubs undergo their transformation for mating, they tap into their “latent connection with the enigmatic forces presiding over all that is eternal”

and become completely invulnerable to everything except one another. Aranea states that these forces “perme8t[e] all those [who are] endowed with immortality”, i.e. god tier players, Lord English, and his servants.

The power exhibited by mating cherubs look like English's minions' "clockwork majyyks", manifesting in the

So far, two servants of English have been seen. The first was the Handmaid, who was permitted to die in the course of completing her final act of service: recruiting her replacement,

the Condesce. As of [S] Collide, the Condesce appears to have been killed, implying that English no longer has need of her service at this endgame stage; thus, her curse has been lifted, allowing her to die. No apparent replacement has been recruited.

Aranea describes English as having “the 8oon of unconditional immortality, where resurrection would not 8e linked with the just or heroic nature of death.”

This is part of the 'reward' Caliborn receives for choosing the path of the destroyer in the Choice offered to him by Yaldabaoth, along with “a limitless supply of power. Enough to destroy anything he wanted, for as long as he wanted.”

Scratch's clock is tied to Caliborn's conditional immortality. This clock was seen to be part of the reward Caliborn received

after killing Yaldabaoth, and was destroyed by Caliborn using the crowbar. Because the clock could no longer judge his death Just or Heroic, he attained unconditional immortality.

It should be noted that the pendulum of Caliborn's clock resembles the Magic Cue Ball, which may explain the source of English's only known weakness: weapons like Caledfwlch may function as a Just/Heroic judgement without the clock Caliborn destroyed, making his immortality strictly conditional.

Inability to keep down the clownEdit

Clowns are notoriously difficult to kill for reasons that basically don't make any sense.

How related this phenomenon is to the above principles is unknown.

It's worth noting, however, that of all the clown themed characters in Homestuck (and other comics by Hussie), Gamzee Makara is the only one actually portrayed as difficult to kill. Even then, Gamzee has actually been vertically bisected twice in two different timelines

, which is enough to kill most sentient beings.

One probable explanation for Gamzee's invincibility is that the alpha timeline – and English's will, enforced through his power as the Lord of Time to cause events to conspire in his favour – required Gamzee to survive until the point at which he fulfilled his role in the creation of Lord English, as seen in Caliborn's masterpiece. His death in [S] GAME OVER, therefore, was possible only because it was subsequently retconned.

John is stabbed by Bec Noir

The temporarily dead Heir of Breath

The dead Thief of Light 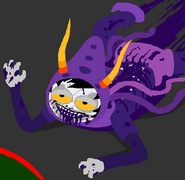 Gamzee revealed to have survived

Jade gets a house dropped on her

Jake is forked by Jane 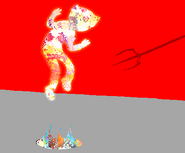 Jake revives after his fatal forking

Jake sacrifices himself to protect Jane

Jane and Jake are impaled

Dave is stabbed by PM and Jack

The dead Witch of Space and Knight of Time

The dead Page of Hope and Maid of Life 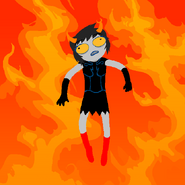 The dead Sylph of Light 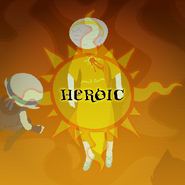 The dead Seer of Light

Add a photo to this gallery

Retrieved from "https://mspaintadventures.fandom.com/wiki/Conditional_immortality?oldid=239413"
Community content is available under CC-BY-SA unless otherwise noted.