Land of Heat and Clockwork

Buy NAK Sell DOOF
Crocodiles are the consorts that dwell upon the Land of Heat and Clockwork. Little is known about them. According to a conversation between Terezi and Dave, they have a tendency to eat you, but this is apparently just their way of being friendly.[1] They also appear to be heavily arrested by the LOHAC Stock Exchange, and do not seem to be aware that Dave is making a goddamn killing at their expense.

Some crocodiles took possession of Dave's belongings when he was sleeping, as Jade discovered when she pestered Dave

. This is extremely odd, as it means they must have somehow gained access to his Sylladex.

Judging by statues seen on LOTAF, it seems Crocodiles are that planet's consorts as well. 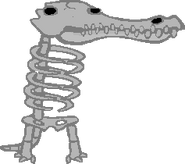