“all these cats and kittens, im telling you. theyre alvways drawvn to the freaks and rejects. you havwe to be 8ROKEN in some vway to get a little concupiscent attention.”

Cronus Ampora is the Bard of Hope and Eridan's dancestor. Not much is known about him, apart from what was revealed in Openbound part 2.

Unlike all other trolls so far, his shirt is neither black nor in his blood color but white. His weapon of choice appears to be Ahab's Crosshairs, like Eridan and Dualscar, as it was found in a chest near him.

Cronus shares a name with the ruler of the Greek Titans, who overthrew Uranus and was, in turn, overthrown by Zeus. Cronus' Roman form is Saturn, the name of one of the planets ruling the Aquarius sign.

"Cronus" was suggested by Radiation on name suggestions for Eridan. His name might also be a reference to Lord English: the figure of the same name in Greek mythology happens to be a titan with dominion over time, and Cronus is the first in a line of Hope players that were prophecized to defeat English.

Upon exiting Terezi's hive as Meenah, a small "scene" (Aranea's Exposition) gives more information about some of the post-scratch "ancestors":

“The 8ard of Hope may seem a little jaded these days, 8ut once he had a deeply abiding faith in magic, and dedicated himself to 8ecoming a great wizard. He 8ecame convinced he was hatched to defeat an extraordinarily evil magician, one he swore the angels foretold of. Though when pressed for the name of the man, he would not say it, claiming it was too dangerous to even enunciate. Part of his self-aggrandizing mythos was that this magician once somehow from afar tried to strike him down at a young age, so he would never have to face him. But the evil spell was deflected, sealing the magician's spirit away in a series of unassuming vessels until he could find some other cunning way to enter our universe. The attack supposedly left him with his distinctive scar. 8ut at some point he became disillusioned with magic. Any truth to his far fetched vision, the legacy of defeating the evil magician would have to 8e passed on to his descendant, or if his descendant proved to be as much of a failure as he did, then perhaps on some other Hero of Hope. I'm unsure why he suffered this crisis of faith, aside from the obvious reasons having to do with an overall lack of character, or any other redeeming qualities. Perhaps someone talked him out of his 8eliefs. Maybe a friend close to him. Or, if one is to 8elieve his fantasy held any water, perhaps someone who was in league with the evil magician.”

Cronus has very possibly feigned issues with species identity and used suicidal threats in attempts to garner the attention of his peers, to no avail, as shown in his interactions with Mituna, Meenah, and later Eridan. He is also a hopeless flirt, often encroaching on personal space boundaries. He can also be incredibly rude on the occasion, to the extent that even Meenah thinks he is a douchebag. He likes to make music, though no music of his has been released on the official Homestuck Bandcamp page.

Like his dancestor Eridan, Cronus is shown to be unlucky in love. He was seen hitting on Meenah and Mituna without success. He seems to like Kankri, as he is the only troll who will listen to him. He also tends to abuse Mituna. 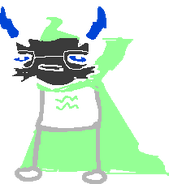 Cronus drawn by Caliborn for Homosuck.