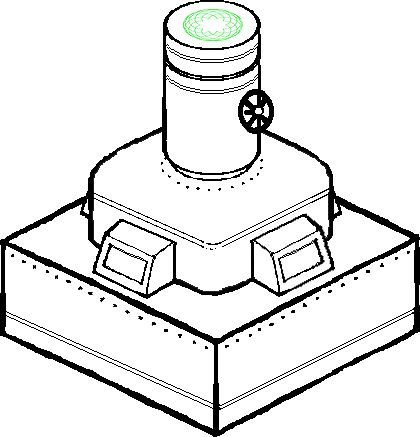 The Cruxtruder is a device from the Phernalia Registry that can be deployed by the Sburb server player immediately at the start of gameplay. Activating the device allows the client player to obtain Cruxite dowels and release the Kernelsprite. Opening the Cruxtruder also begins a rather ominous countdown sequence that warns of some form of impending doom. Typically the countdown is timed to the arrival of a meteor redirected by the Reckoning. However the countdown may warn of other impending dangers such as the arrival of the Condesce or the eruption of a Forge, especially in circumstances where no Reckoning occurs.

The Cruxtruder is very large and should be placed carefully as not to obstruct any important doorways, as it costs a lot of Build Grist to move. Unfortunately, Rose deploys John's Cruxtruder in front of the front door to his house.

The other kids each have Cruxtruders in their houses as well. Rose's is in her observatory, Dave's is in his bedroom, and Jade's was temporarily in The Grand Foyer, but was teleported into space by Becquerel soon after.

The Cruxtruder can be attached to the Alchemiter as an add-on, rendering the original separate device obsolete.

on the Trolls' meteor. It appeared to spawn no Cruxite Dowel, and its countdown was displayed as ~U. Since this is a reference to ~ATH code, and the symbols are in place of where the countdown usually is, it could mean that Caliborn's cruxtruder is counting down to the end of the universe. The significance of this remains unknown.