Surrounds text with ▲triangles▼ according to the mood of the sentence. Uses more for emphasis.

(this title was too long) ♫
Daraya Jonjet is a young Alternian troll living in Outglut during the time period of Hiveswap and Hiveswap Friendsim. Her bullet points were "Has been in detention her whole life", "Imitation grubhorn bracelet", and "ch-ch-ch-cherry bomb". Daraya was first revealed during the Hiveswap Troll Call event alongside Mallek Adalov on November 15, 2017. Daraya was later featured alongside Nihkee Moolah in Hiveswap Friendship Simulator: Volume Seventeen. Her bullet points were altered as from December 6, 2018 to "Been in detention for her entire life", "Imitation grubhorn bracelet" and "Apathy level varies".

Daraya is a jadeblood residing in the brooding caverns, presumably working alongside her fellow jades to uphold their role in Alternian society. In the events of Hiveswap Friendsim: Vol. 17, the player spots her lurking around the back door of Elwurd's hive, the jadeblood hoping that she could sneak inside. Daraya is initially irritated with the player, as they are defensive of Bronya and Lynera; two people that Daraya aren't particularly fond of. She bluntly asks whether the player would help her meet Elwurd or not.

If the player decides to help Daraya gatecrash, both Daraya and the player run into Chahut almost immediately. The purpleblood spends a few moments appearing to menace Daraya for straying from her duties, but dismisses it all as a joke. Even so, Daraya no longer feels the compunction to attend the party, asking the player to lead her somewhere less lame.

Should the player suggest wandering the street like hoodlums, Daraya reluctantly agrees with the plan. As the player's attempt to chat with Daraya isn't exactly smooth sailing, the player is quite overjoyed to see Tyzias in the same area. Daraya is thus introduced to the tealblood, the player hoping that Tyzias might help Daraya channel her anger and hopelessness into something more productive. Unfortunately, Daraya spends the entire exchange being rude and disrepectful, incensing Tyzias. The player has to intervene before a fight breaks out, Daraya eventually apologizing for her insolent behavior. After hearing more advice from Tyzias, Daraya decides that helping Tyzias out on her plans would be alright. The two agree to exchange numbers, then the player gets to hang out with the both of them for the rest of the night.

If the player suggests that she return home instead, Daraya scoffs at the player's obedience and ditches them.

Should the player admit that they don't have any good ideas and let Daraya choose someplace to go, she becomes mildly frustrated as she hadn't really had the chance to explore the outside world. Even so, Daraya takes the player to the one place she deems cool, giving them directions to a long abandoned city. Whilst adventuring in the decrepit mall, Daraya points out several interesting details to the player, prompting the player to wonder aloud at the prospect of growing up on a planet full of kids. This sets Daraya off, for she is incredibly unhappy with her position and arbitrary duties on Alternia. Her rant about the absolute lack of freedom turns into something else altogether when she causes a large explosion in the crumbling food court, the player unable to reason with her. When the player tries to drag her out of the four-alarm blaze, Daraya kicks them aside angrily. The player is forced to leave Daraya behind, though they fervently hope that she would find a way out of the catastrophe. However, it is likely that she allowed herself to be consumed by the flames devouring the derelict mall.

Daraya is a disillusioned jadeblood rebelling against any person with authority, apathetic and indifferent to anything and everything around her. Despite her detached and disaffected demeanor, she harbours a lot of anger and resentment at her freedomless by virtue of her caste position. She mentions that her rebellious attitude is a byproduct of her internalized hopelessness, for she would rather not think about matters that would send her into a depressive spiral. Even so, it is realtively easy to rile her up into a destructive state: all the player needs to do is feebly offer a meaningless reassurance and Daraya will explode in rage. She also shows nihilistic traits, for she believes nothing means anything and has dedicated her final moments to destroy all that she cares about so that there's one less thing to be concerned about. When the player desperately tries to bring her to safety (she'd caused an explosion that set the abandoned mall ablaze), Daraya furiously kicks the player aside, hinting that she would rather embrace death than deal with the injustices taking place on Alternia as a whole.

Apart from that, Daraya has a tendency to sigh or groan in exasperation. She doesn't appear to appreciate small talk, for she almost immediately winds up griping about her less than ideal social position on Alternia. Given her sullen nature, she prefers to be left alone; when describing the abandoned city she stumbled upon, she claims that she adores the place as there's no one around. Yet if she deems a person to be cool enough for her taste, she might hang with said person as she wouldn't get bored of their company too soon.

However, Daraya is aware of how her actions affect others and would apologize if she'd caused any offense. This is best illustrated when Daraya is conversing with Tyzias: the teal tries her best to talk Daraya out of her apathetic and self-destructive tendencies, but Daraya takes it upon herself to discredit everything Tyzias says. When Tyzias finally gets angry with how Daraya dismisses any effort as pointless, Daraya quickly apologizes for being tactless with her opinions. Daraya's soft side is also shown when she gives the player an awkward but well-meaning pat when they're feeling distressed.

Daraya is noted to use heavy makeup; the player describes her eyes like twin black holes where all sense of fun and concern go to die. Her overall look is meant to show her rebellious nature—spiky haircut, black spikes, chunky black boots, the sleeves of her shirt haphazardly hacked. She also is prone to slouching and crossing her arms, using body language to indicate that she's absolutely unimpressed and unaffected by events around her.

Daraya seems to have a flushed crush on Elwurd, with evidence being how she visibly blushes when describing the cerulean's cool appearance and demeanor. Even though she tries her best to deny such a thing by downplaying what she really thinks of the other troll, it is evident that she is smitten with Elwurd. She mentions that she met Elwurd via Bronya, though she doesn't understand why someone like Elwurd would even bother dating Bronya in the first place.

She is outright terrified of Chahut, though she tries to hide her fear behind a facade of apathy and indifference. However, the moment Chahut leaves her and the player in peace, she quickly writes the party off as lame and quickly leaves with the player in tow, clearly meaning to avoid Chahut and the likes of her.

As for Lynera, Daraya detests her fellow jade and finds her extremely aggravating/boring. She doesn't offer any more details, but later admits that Lynera was right when she said the player was good to be real with. The moment the player inquires about her relationship with Lynera, though, Daraya is quick to claim that she loathes her fellow jadeblood, hastily adding that said hate was not in the romantic sense. However, Daraya's reaction is much too flustered for it to be natural, which makes the player privately guess that Daraya might have a caliginous crush on Lynera.

Daraya holds a similarly unfavourable view of Bronya, believing her fellow jade to be overly optimistic and long-winded. When the player tries to cheer Daraya up, she grumbles that they sound just like Bronya, implying that Bronya has either nagged at or advised Daraya numerous times, until Daraya is beyond sick and tired of hearing the same maxim over and over again. Even so, some of Bronya's protective traits might have rubbed off onto Daraya, as Daraya has a tendency to comfort those in distress, albiet in a somewhat stiff manner. 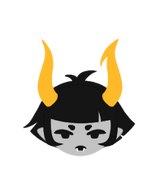 Daraya's sprite from the trial

Retrieved from "https://mspaintadventures.fandom.com/wiki/Daraya_Jonjet?oldid=245557"
Community content is available under CC-BY-SA unless otherwise noted.