This is a list of Dave Strider's possessions, excluding his outfits, computers, and weapons.

the apple juice in his closet. It was quite a nice surprise. Dave intended to enjoy this juice, but was too freaked out by images of a monster Howie Mandel replacing it with urine, thanks to a conversation

It was later accidentally expelled

from his Sylladex when he captchalogued his Ninja Sword, spilling on his precious turntables as well as his copies of the Sburb Beta. (Dave had previously stated

Act 4 shows him drinking another bottle of apple juice, causing him to need to pee. He considers using the empty apple juice bottle and sending the pee-filled bottle's card code to John so he would drink the pee. But he later dismissed this idea because it was boring.

In part 3 of Openbound, Dave can chat with Rose Lalonde, who is trying to use bottles and old-fashioned alchemy in an attempt to make unspecified tasty beverages. Dave asks her if she's making apple juice, and she says she'll see what she can do. However, later on in A6I3

, it turns out that the only thing Rose has been able to make is booze. Dave expresses frustration with her inability to alchemize apple juice, while Rose explains that “an apple is as closed to being a noshushnally irredushible object as it gets” 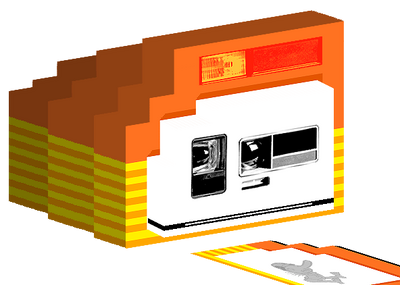 . It has the ability to snap a ghost image of the object it is being pointed at and it spits out a new captchalogue card every time it is snapped. It is suggested in a conversation

between Davesprite and Jadesprite that Davesprite alchemized a Captcharoid Camera too and used it to get the Captcha Code for Fear No Anvil.

The camera was alchemized with Dave's Brain and a Hella Jeff drawing to produce the SBAHJifier.

Dave's Brain in a Jar was alchemized

by combining the fetus in a jar with a self-portrait taken with the Captcharoid Camera.

It costs 1,000,000,000 of a hitherto unknown type of grist, seeing as the organ is virtually inimitable, but Dave was able to obtain the Captcha code by taking a picture of the hologram with the Captcharoid Camera.

This method may have been employed by Dirk Strider to captchalogue his brain and create Lil Hal, if his Bro somehow made a similar Captcharoid Camera without an alchemiter.

The unknown type of grist required to make an actual tissue copy of Dave's brain may have been available to the trolls in their session within the Land of Brains and Fire, though no such material seems to be available within the kids' session for such use.

The Mr. T Puppet was Dave's Bro's. It first appeared in Act 2, wearing a leather thong and handcuffed to a pantsless Chuck Norris

. Dave explains this to be “like ten levels of irony removed from the original joke”.

The Mr. T puppet also appeared in Act 4 when Dave was combining various items together. He combined the fetus in a jar with the Mr. T puppet to make the Foam Fetal Mr. T in a Jar

for 25 build grist and 1 rust. This was described to be “Another backbreaking victory for science” and took part in weirding the underlings out

, along with other items alchemized by Dave. 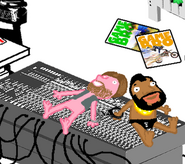 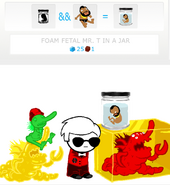 Dave finally made something useful with the Alchemiter by combining the Captcharoid Camera with his brain and a picture of Hella Jeff to create the SBAHJifier at the cost of negative 1000 artifact grist, meaning that Dave gained grist by creating this item.

The camera creates a Sweet Bro and Hella Jeff comic based on anything it takes a picture of, saving Dave a lot of time. “Specifically the five minutes it takes [him] to draw a comic.”

Dave used the SBaHJifier once on Davesprite, creating a comic that incorporates Davesprite's orange sword and wings. This same comic is reiterated in a slightly modified form 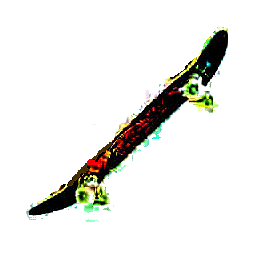 by alchemizing his skateboard and a Hella Jeff drawing.

After being created, it proceeded to get RIDICULOUS air and has since been seen gliding through the clouds of Skaia.

Shortly after Unreal Air had soared away, Dave duplicated it and captchalogued it before it was able to fly away again. It seems to be one of the few items created with a SBaHJ poster that can interact with its enivronment. (The SORD..... Dave made earlier was too “unspeakably shitty”

It was later seen in Dirk Strider's room, and it is hinted that his Bro escaped on it after his duel with the Mirthful Executives. Later on, Dirk holds a conversation

with Dave stating that Dirk's Bro did actually fly off “on a shitty skateboard”.

Unreal Air as seen being shredded by "SKATERBOARDER". This image can be seen at the bottom of the Sweet Bro and Hella Jeff comics.

Dirk's Bro absconds on his Unreal Air after defeating Jay and Dope.
Community content is available under CC-BY-SA unless otherwise noted.
Advertisement