Land of Heat and Clockwork

Davesprite, also known as Alternate Future Dave, is Dave's sprite in Homestuck. He is prototyped from an alternate future version of Dave from a doomed timeline and the Rambunctious Crow.

Davesprite was originally Dave from the doomed timeline where he tier 2 prototyped Crowsprite with Lil Cal. He believed the split was the result of John being tricked by Terezi into confronting Typheus prematurely, leading to John's death. Upon splitting from the Alpha Timeline, he and Rose lost contact with the trolls, assuming that they, having achieved their goal of sabotage, had no further reason to contact them. Jade was believed to be killed by her meteor, since John couldn't connect to her to get her into the game. With only two players remaining, and neither being a hero of Space, the game was unwinnable.

Alternate Future Dave on the Land of Heat and Clockwork four months into the future, where he discussed the deaths of his friends with Rose.

Dave had alchemized some advanced gear including the Timetables and Caledscratch. He was also high on his echeladder, managing to defeat challenging enemies with ease and style.

Dave's Kernelsprite was prototyped with the remains of the Rambunctious Crow by Jade, much to Dave's distaste. In Alternate Future Dave's timeline, it was second-tier prototyped with Lil Cal, a decision he deeply regretted due to its incessant inane laughter.

After learning as much as possible about the game, Dave used his Timetables to travel back to a period right before he prototyped his Sprite for the second time and prevented alpha Dave from prototyping Lil Cal, instead jumping into the Sprite himself after handing over his inventory. He also stopped John from skipping ahead to his seventh gate and getting killed by his Denizen.

As Davesprite, he gained access to the knowledge the game provides to sprites. Although he is supposed to be cagey about his newfound knowledge, he “[didn't] really feel like it”

and told alpha Dave whatever he needed to know. However, alpha Dave declined to take advantage of the situation, never pushing Davesprite for answers to the game's larger mysteries. Davesprite also retained use of his iShades, as they were the only thing he didn't expel into a huge pile of captchalogue cards before he jumped into the sprite. He was upset when John called alpha Dave “real Dave”, although alpha Dave says that “i wouldnt give a shit” and that “hes me”.

He would update Sweet Bro and Hella Jeff while alpha Dave continued his quest. The second-tier prototyping seems to have erased the rambunctious crow's personality entirely, as was the case with Jadesprite, so he displayed no avian traits apart from an ironic “caw caw motherfuckers”. and a “PEEP” on his writings on the Armageddon poster

After Dave stole Caledfwlch from a Crocodile Temple, Davesprite revealed he did the same in the alternate timeline. He defended Dave from a horde of Giclops after Vriska put him to sleep, then used Dave's pendant to release himself in the same way Rose released Jaspersprite.

He then went to track down Bro, and found him in a duel with Jack Noir on the Land of Wind and Shade, and joined the fight. During the fight, Jade entered and prototyped her sprite with Becquerel, resulting in Jack's transformation into Bec Noir. Jack quickly killed Bro and seriously wounded Davesprite. What remained of him was a pile of orange feathers and his pendant. When Jade looked for the Daves in the Incipisphere with her Junior Compu-Sooth Spectagoggles, the goggles didn't count a certain dead Dave

, but still counted Davesprite, despite the assumption he was deceased. All this pointed to his ongoing survival, later confirmed when he revealed himself

to Jadesprite on the Battlefield, short one wing and wielding a complete Royal Deringer. He obtained this through "shenanigans" involving the denizen of LOHAC, Hephaestus, who, in words of Davesprite, is “always about to just fucking flip but still keeps it together”. He tells Jadesprite he entered his denizen's lair much like the same way his first time, but as injured as he was, he made no attempt to fight him. Hephaestus, like the first time, gave him The Choice, albeit a different one: he assured he could repair anything, which required lava from the forge in Jade's planet. Jade, having lit the forge through a truce with Echidna, allowed Davesprite to choose having the Royal Deringer fixed, as opposed to something else, and he finally brought the sword with him to the Battlefield, and had Jadesprite teleport it to dream Dave with her first guardian powers.

As the meteors from the Reckoning reached the Battlefield, Jadesprite merged with alpha Jade and ascended to God tier. The new god tier Jade that resulted shrunk down the giant meteor threatening them, then proceeded to shrink down the entire Battlefield along with Davesprite and everyone else inhabiting it, including Nannasprite and Jaspersprite. She took them with her on her voyage through the Fourth wall. He used his sprite abilities to draw on the poster that was sent to Karkat.

One year into his journey across the Yellow Yard he was seen playing the Ghostbusters II MMORPG with John, Jade and all the others on the Prospitian battleship. He has fully recovered from his injuries, even having regrown his missing wing. During the trip he began

dating Jade, but by the end of the second year had broken up with her

for unknown reasons, Jade saying “basically hes just going through a lot of stuff right now”. Afterwards, he began antagonizing John, leaving disparaging notes in the style of his deceased father, and watermarking the sky with his face using sprite magic.

When the Prospitian battleship finally reached the post-scratch session, landing on LOMAX, Davesprite confessed to a sleeping John

that he had probably done Jade a favor by breaking up with her, believing himself not to be the “real dave”. After furthering this monologue to John, he launched into the sky, leaving the ship and the kids behind with only orange feathers, some notes he had written, and some watermarks as mementos of his presence.

He met up with Arquiusprite on the Land of Tombs and Krypton and began discussing things, including Calsprite from his timeline. Davesprite got on well with him because they were both considered lesser to their "real" counterpart: Dirk's AR was a piece of technology that, despite being sentient, was often dismissed in favor of the biological Dirk.

In the new timeline created by John's retcons, Davesprite was killed along with John

and the entirety of LOWAS early on in the three-year trip through the Yellow Yard, leaving Jade lonely on the ship. However, the pre-retcon Davesprite was transported to the post-retcon timeline along with LOWAS, John, Roxy, Nannasprite and Jaspersprite, and was then prototyped into Nepetasprite to become Davepetasprite^2.

Davesprite's personality is mostly that of alpha Dave's, with a few differences. He appears a bit more bitter and worn out than Dave, partially because of having been through months of gameplay in a doomed timeline already, and partially because the others don't consider him to be a "real" Dave. He is later referred to as a "depressed bird version of dave" by Davepetasprite^2.

Jade has stated that Davesprite is “kinda different from dave” with some slight differences in personality. His rapping style hasn't changed though. He was once described by John to be “an orange, feathery douche”. His bitterness seeming to come from already being through so much, to the point of John, someone he cared deeply about indirectly calling him a fraud 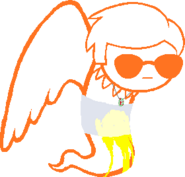 Davesprite injured after his fight with Jack. 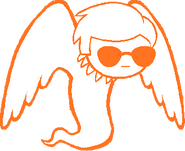