For the Homestuck character occasionally referred to as the Angel of Double Death, see Lord English.
For the list of character deaths in MS Paint Adventures, see List of dead characters.

The dead leaving the Afterlife
Death is a character in Problem Sleuth who acts as a psychopomp, escorting characters to the Afterlife when their life gauges are depleted. He often enjoys playing various board games with the recently deceased not unlike the Death of Ingmar Bergman's The Seventh Seal, or of Bill and Ted's Bogus Journey.

Death is not a particularly assertive character, often allowing characters to interact with the world of the living after their death. His meticulous nature in taking things slowly, properly, and thoroughly works against him several times in performing his assumed duty, which is ensuring that those who are in the Afterlife stay there. He will often venture out into the world of the living to find other players for some board games just to pass the time, notably (and ironically) including the Game of Life. He is also quite fond of tea. When particularly moved or saddened, Death sheds tears of black liquid sorrow.

Death shares many characteristics with Pickle Inspector, including his nervous yet polite demeanor, his body type, and even his ogling. When Death first meets PI he gives him an ogle before offering him some delicious tea. Death's similarities to PI may be because of his relation to GPI.

While Death does not make an appearance as a literal character, as he does in Problem Sleuth, there are several references and allusions to him. Aradia compares time to a “game in realitys cupboard”, a reference to Death's game cabinet and Game of Life. Karkat's ~ATH manual appears to have Death's face on it. Additionally, it would seem that both Death and his “SUP3R FOXY H4NDM41D” are both well known figures in troll mythology, although they seem to have been inspired by real figures in troll history, namely Lord English and his handmaid.

Death with his scythe 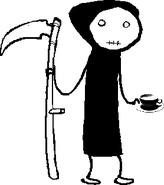 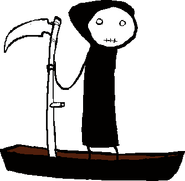 Death in his boat