Dicekind is the Strife Specibus used by Vriska Serket. Historically, dice weapons were employed by Gamblignants, such as Marquise Spinneret Mindfang, a type of risk-prone Alternian marauders who are now believed to be extinct. Mobster Kingpin, PFPI and Hearts Boxcars are also shown using dice to attack (in Problem Sleuth and donated pages), however, as they don't use sylladexes, they can't also have Kind Abstrata. 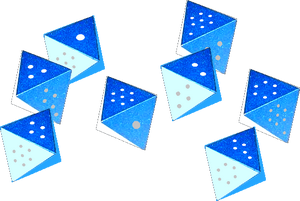 The Fluorite Octet are an enchanted set of dice (or a set of enchanted dice), possessed by Vriska Serket. There are eight eight-sided dice in the set ("8d8" in pen-and-paper role-playing parlance), and they appear to be composed of one of the blue varieties of fluorite, likely based on the formative subset, Octahedral Fluorite. The numbering is different from either traditional Earth dice or human role-playing dice, as each side has a unique pattern of pips, including a triangle of pips for three, a parallelogram for four, a sort of arrow-shape for five, a hexagon for six, and a pattern for seven resembling the design of Vriska's seven-lensed eyepiece (used before she lost her vision eightfold). The design for eight is identical to that for seven, with a single additional pip set to the side.

- possibly a game of Flarp. Her partner on this campaign was Eridan Ampora, who discovered Ahab's Crosshairs aboard the same ghost ship.

Vriska used these dice as her primary weapon for the entire story. Before her death, she sent John Egbert the code for the dice, in the hope that he would continue their legacy. She wanted him to make something awesome with them, and it seems that he did

Fluorite Octet seems to have a secret meaning according to Earth and Alternian pirate lore. According to Aradia, in the alternate story of Peter Pan, Pupa Pan, Captain Hook had lost an arm and an eye before he died. This does not fit the original legend of Earth's Captain Hook, who only lost an arm. However, this eerily fits Vriska's past when she lost her arm and eye, and also desired to be a pirate with a hook for an arm. Similar to our Captain Hook, Pupa Pan's Captain Hook feared a beast with a 'tick-tock' sounds coming from its belly, like the crocodile with a clock in its stomach. However, the last words of the mythological troll captain were apparently "Break Heads" while in the very first play of the Earth story, Peter Pan, Captain Hook said with his final breath "Floreat Etona", which was a phrase from the college at which Captain Hook was originally schooled, but the name is nearly identical to that of Vriska's weapon, Fluorite Octet.

The octet is used by rolling the full set. Each of the eight numbers in a roll is considered unique - the result of the roll is determined not by the total number rolled, but by the combination of numbers rolled by each die. Think of the result of a theoretical roll as being "6,5,2,7,4,1,3,8", for instance, not "36". It is not known whether the identity of each of the eight numbers is determined by the order in which the dice fall, or whether each die has a set place in the final permutation of numbers.

- possible permutations of rolled values, as referenced by the weapon's captchalogue code. Note that the order the dice land is important- 18888888 produces a different attack than 88888881. The attacks resulting from these rolls are said to be

“highly unpredictable”, and fortunate results are “devastating to even the most powerful opponents”.

include Musclebeast, Blizzard, Weasel, Levitation, Reroll x 2, Dutton, Naptime, Guillotine, and Ancestral Awakening. This consists of both the set of results that can be determined by one die when the other seven are already set in their values, and the single best roll possible - it still leaves unknown the results of the other 16,777,207 permutations. It is not known whether multiple different rolled permutations can result in the same attacks, though it is implied that there are a full field of results, numbering eight to the eighth power, with a unique attack for every possible roll.

The "Reroll x 2" technique presumably allows the user to roll the Octet two more times, and then presumably executes the attacks resulting from both rerolls.

"Ancestral Awakening", symbolized by Vriska rolling circle 8s on the Octet, invokes a powerful transformation that gives her an outfit reminiscent of her ancestor, Marquise Spinneret Mindfang, a sword for a weapon, and presumably an exponential power boost.

In the trolls' battle against the Black King, Vriska was shown to roll 8 eights, described as an "impossibly lucky roll

", implying that higher numbers produce stronger attacks on the dice.

When used by John with the Pop-a-matic Vrillyhoo Hammer, the dice likely produce different effects,

but there are only eight known combinations so far, as seen with the list of possible combinations for a final roll after 1-2-3-4-5-6-6. Out of these eight attacks, John rolled an 8 and used RIDICULOUS HAT