All lowercase, omits punctuation at the ends of sentences. Encloses all speech in (| hotdog brackets |). Words highlighted in bolded yellow with initials capitalized solely when referring to his Meaty Delicacy.

Moonshine ♫
Diemen Xicali is a young Alternian troll living in Outglut during the time period of Hiveswap and Hiveswap Friendsim. Diemen was first revealed during the Hiveswap Troll Call event alongside Skylla Koriga on December 6, 2017. His bullet points were "All About That Oblong Meat Product", "oblong meat product contents: uncertain", and "current oblong meat product temperature: 65 degrees fahrenheit". Diemen was then featured alongside Ardata Carmia in Hiveswap Friendship Simulator: Volume One. His bullet points were altered as from December 6, 2018 to "Meat enthusiast", "Living the nomadic shrubbery lifestyle" and "Cheerfully nihilist".

Diemen is the name of a town in the province of North Holland, Netherlands, which comes from the river Diem (itself originating from di eme, meaning "the water"). Alternatively, it may come from the German die men ("the men"), or its agricultural definition of "a layered pile of hay, peat, or straw in the open field". Xicali may originate from Mexicali, the capital city of Baja California. Additionally, Xicali in chinese means "scrubbing force", possibly alluding to a birth assignment typical of a rustblood.

Diemen's leaked placeholder name, "Hotdog", comes from his original design having a wiener dog lusus, according to James Roach. It fits his current love of hot dogs as well.

Prior to the events of Hiveswap Friendship Simulator: Volume One, Diemen lived in a hive in Outglut with his lusus. However, shortly before the start of the game, a drone patrol bombed his home as part of routine culling of lowbloods. His lusus was killed, and Diemen was forced to take to the streets, obtaining food by "talking people" into giving him oblong meat products.

The player, as the MSPA Reader, can encounter Diemen on the streets of Outglut at the start of Hiveswap Friendsim. Diemen is initially suspicious of the player's motives, and worries that they seek to take his meat product from him.

If the player asks him for a bite of his hot dog, Diemen, offended by their resquest, will abandon the player, leaving them forever.

If the player chooses to pat his back, Diemen will warm to them considerably, to the extent that the MSPA Reader wonders if Diemen is making flushed advances on them. Diemen offers to share his oblong meat product, suggesting he and the MSPA Reader both place the hotdog in their mouths and eat along it, Lady and the Tramp style. However, the MSPA Reader chokes on the meat, and accidentally spits it back into Diemen's face. Diemen is so shocked that he stumbles backwards, pulling the player with him, and after rolling down a hill, Diemen hits his head on a concrete curb, after which MSPA Reader lands on him ass first, leading to the outcome of Diemen being killed, and MSPA Reader accidentally and unwillingly earning the high ranking title of deadliest ass on Alternia. The player attemps to hide the body in a bush, but is unsuccessful, and Ardata appears offering to clean up the mess. This results in the bad "you killed him!!" ending to Diemen's route.

If the player chooses to hug Diemen, then during the awkward embrace Diemen will accidentally drop the oblong meat product, causing the MSPA Reader to accidentally trample it into the mud. Diemen is distraught, but in their attempts to comfort him the player offers to help him obtain a new one, claiming, falsely, that they know where a large number of oblong meat products can be obtained. Spurred on by this, Diemen follows the player on a circuitous, random route through Outglut, that eventually leads them into the sewers. After more aimless wandering, Diemen feels that he is too tired to go on, and despairs at his inability to obtain more meat products. However, he feels gratitude to the player for attempting to help him. The two then feel the rumbling of a drone patrolling the sewers, and hurry to escape. Diemen falls in the sewage, only to be rescued by the player and pulled up a ladder to the surface. The two realize that they have emerged into a meat storage freezer, filled with oblong meat products. Diemen is overjoyed, and he and the player become certified friends in this "meat heaven!!!" good ending to Diemen's route.

Diemen appears in Hiveswap Act 2 in the rust blood car.

A low-ranking burgundy blood, Diemen's hive was destroyed by drones in a routine neighborhood culling prior to the events of Hiveswap Friendsim, an event that also killed his Lusus. Diemen was subsequently made homeless, and forced to live on the streets scrounging for food; particularly, Oblong Meat Products, a Troll hotdog analog. Despite being forced to live on the streets, he retains a relatively optimistic view on life and does what he can to get by. He mentions that he's gotten quite proficient at talking people into giving him meat products, but is still quite wary of people trying to steal his food right under his nose—it's happened several times in the past, since trolls think Diemen's status as a burgundy makes him an easy mark. Yet, he later laments that he's not particularly good at anything, and some of his attempts to get more food ends up ruining his friendships. While friendly and open to chat with others, Diemen prefers taking things slow when making new friends as he wants to assess whether the person in question is indeed friendship material. His cautiousness can be attributed to the fact that he's worried people are only trying to get close to him so they can get his oblong meat product. Diemen's trust can be earned by being a good and understanding listener, as well as being genuinely helpful and kind to him. By then, he's more likely to speak candidly about his life, and even offer the player his shirt to use as a sling for their broken arm. It should be noted that he seems to get really attached to the player in a short amount of time; in his good ending, he stares at the player a little too intensely after the player saved his life, while his second bad ending has him blatantly making flushed advances on the player. When Diemen loses his hot dog to the player's clumsiness, he is visibly distraught and upset. But the instant the player offers to get him another one, Diemen is willing to put his grievances aside and follow the player in their search for food. Once fixated on the goal of obtaining another meat product, Diemen becomes surprisingly gullible and goes along with whatever the player says. He misses his lusus quite a lot, and would openly weep when reminiscing the activities and food they'd bonded over. However, he understands that dwelling too much on the past wouldn't really help, and instead focuses on the few benefits of living off the grid. Diemen believes that if he can survive on his own out in the open, his lusus would be immensely proud of him, since life on Alternia as a lowblood is no easy feat.

Diemen later appears in Friendsim volume 11 driving around with Mallek Adalov along with a bronzeblood named Treyaf. Mallek is rerouting Scythian shipments and continues to offer Diemen one of the beds in his apartment. Diemen declines, preferring to live in his shrub, saying that he “cant be tied down.”

Diemen shows up as a cameo in Hiveswap: Act 2. He is on the rustblood car in the train and can be talked to, although he will accuse Joey of trying to steal his hot dog in the middle of their conversation and won't say anything else after.

Diemen's Troll Call reveal card described him as "All About That Oblong Meat Product", although notes that he is uncertain about its precise contents. Diemen is rarely pictured without his signature hotdog, of which he is very protective, and much of his dialogue concerns it.

Mallek is quite friendly with Diemen despite the latter being a lowblood, and had once offered Diemen a place to stay should the rust become tired of living out on the streets. Mallek seems to like Diemen enough to keep him around, and has no qualms paying the lowblood for services rendered. Considering Diemen's parting remark: 'it's nice to see you again', the two probably are friends to some capacity.

Diemen seems to have had a good relationship with his lusus and is greatly upset by his death.

Diemen in the Friendsim Volume One character select screen (right)

Diemen during his introduction scene 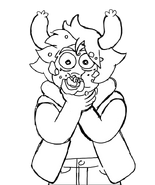 A seemingly unfinished lineart WIP for Diemen's choking sprite, from the game's files

Diemen at the party

Diemen at the party ver. 2