Dirk Strider is a skilled mechanic, and created several robots over the years. These include making his own rap battle partners, a sparring partner for Jake English, and a fully robotic shell encasing the original Con Air bunny. He also helped Jake in constructing the Uber Bunny for Jade Harley.

Squarewave is one of two rap-battling robots built by Dirk Strider. His appearance is based on one of the robots in the C.R.U.N.K. poster on the wall of Dave's room. He is an enthusiastic rapper, but Dirk can easily beat him in a rap battle, unlike his counterpart Sawtooth, whom Dirk has never beaten. His name comes from a kind of waveform. The mouths of both Sawtooth and Squarewave are reminiscent of the shapes of their namesake waves. 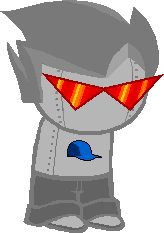 The brobot is a  fully roboticised twin of himself that Dirk made and sent to Jake, as the boy had wanted a sparring partner. Comes with all the awesome. Ironically fulfilled half of Dave's idiotic thought by bleating like a goat in order to distract (then decapitate) an extremely familiar sea-goat on Jake's island. Apparently puts Jake in a lot of violent encounters quite frequently. Contains the uranium that Jake needs to send a certain very important delivery. He once beat the crap out of Jake

à la clog-dancing on his face, skipping him like a rock across the ocean (saving him before he sank only to inflict other tortures), et cetera. According to Jake, the fight ended with Brobot “throwing a weird tantrum and ripping his nuclear heart out in front of [Jake]”.

, Brobot is “nigh impossible to spar with” save for when his difficulty setting is set to Novice; however, Jake admits that under these conditions “the whole proceeding seems to become a bit tender for [his] liking.” It does not appear to have a kill mode, like most of Dirk's robots

, though if it did, it would probably never have been activated, as it would have easily killed Jake.

Previously known as Huggy Bear, before coming into the ownership of Jane. A fully robotic bunny created by Dirk Strider. Contains the original Liv Tyler bunny, which appears to have been stolen from post-scratch Dave, a process which likely involved some form of shenanigans. Appears to have a reputation for mischief. Seemingly died when he fell into the ocean, but was later found alive, albeit heavily rusted, by Gamzee and Caliborn on Earth far into the future. He could be possibly named for the mini horse Li'l Sebastian from Parks & Recreation.

The Lord English Robot is an unnamed robot presumably built by Dirk and Jake which appears in Homestuck: Credits fighting him and Sawtooth.

Within the Meat Timeline of the Homestuck Epilogues, Dirk built a robot body to host Rose Lalonde's Ascended Self.

Retrieved from "https://mspaintadventures.fandom.com/wiki/Dirk%27s_robots?oldid=247279"
Community content is available under CC-BY-SA unless otherwise noted.