Earth C is the name used to describe the incarnation of Earth that exists in the universe created as the result of the B2 session. More specifically, it is the same planet as Future post-scratch Earth, but captchalogued by Vriska Serket who “rode the meteor through the g8, watched it crash on Earth, then just captchalogued the whole damn thing and got out of there.”

, given to John Egbert to give to Jade Harley to bring it into the new universe, where it became the seat of a new civilization. In the distant future, this Earth, long since abandoned by other sentient life, became the birthplace and home of the Cherubs Caliborn and Calliope.

The period of time during which Earth C was inhabited by the Homestuck Kids, the surviving A2 Trolls, Calliope, and the Carapacians and Consorts taken with them into the new universe, is the time period during which The Homestuck Epilogues are set. 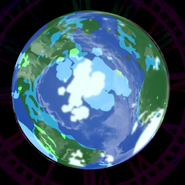 Earth C, as seen during Act 7

A park outside of new Can Town hall on Earth C, seen during Act 7

First during Act 7 and then the Credits of Homestuck, it is shown that this Earth was once again seeded with life, including that of humans, trolls, carapacians, and consorts. After travelling 5000 years into the future to allow civilization to establish itself, the planet has become divided into four distinct kingdoms:

The Homestuck Epilogues take place seven years after the arrival of these principal characters, from their perspective. These epilogues exist "outside of canon", and across two timelines. The Meat timeline, treated as the "more canon" timeline, involves a conflict in which:

The Meat timeline is the timeline in which the events described in Caliborn's masterpiece occur.

The Candy timeline, treated as the "less canon" timeline, involves a narrative in which:

Long after the previous time period, the events covered in Homestuck proper pick up again.

The planet's star by this point has long since become a "massive" red supergiant, reducing the planet's surface to a wasteland scattered with a large number of ruined, JPEG-artifacted Statues of Liberty added by Dirk's Bro

. It was discovered by a cherub looking to lay his egg after losing his mating battle. He laid his egg and flew off, and soon after Calliope and Caliborn hatched from the egg and were adopted by Gamzee Makara. At some point, Gamzee, for unknown reasons, chained Calliope and Caliborn up in a room in the trolls' meteor.

, the planet entered the Medium with Caliborn and took the role of his planet in the Medium instead of one usually generated by the game. There he finds the denizen Yaldabaoth, brought from Dirk's planet by Weird plot shit, has taken up residence in Earth's core.

A strange computer connected to a broadcast tower is also located on this Earth, displaying the current act and narration on the page and allows a user to converse with the narrator. During the course of his quest, Caliborn has unlocked many more of these towers

After meeting with Yaldabaoth and making his choice, Caliborn left Earth and headed to the minor planets in his session. Upon conquering all these minor planets, Earth transformed into the Land of Colours and Mayhem. After a trivial act of self-suicide, Caliborn went god tier, found a building in the shape of Lil' Cal's head, where he wrote shitty comics and fought John.