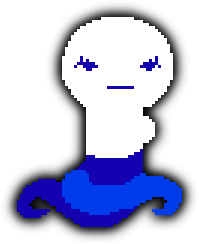 . She appears to have some connection with Heroes of Space (possibly being the denizen of all heroes of Space), but there is evidence suggesting aspects and denizens are unrelated.

She is a denizen who plays a major role in the Scratch: Jade consulted with her on how to initiate the scratch, as did Aranea and Porrim in the pre-scratch trolls' session. She is the source of the Quills of Echidna, the strongest known weapon available to the Needlekind abstratus. Vriska suggests that she, along with Yaldabaoth, is one of the most important denizens.

Depending on the lighting, Echidna's scaly skin appears as either a pale lavender or a silvery light blue.

Echidna is named for and based on the Greek mythological monster of the same name, referred to as the "Mother of all monsters" and the mate to Typheus.

Jade has encountered Echidna at least twice, but instead of killing or even fighting her at all, she has talked to her Denizen and used her as a source of advice on how to deal with their doomed session and complete the Genesis Frog. She tells Karkat that they have come to an understanding of some sort, although she withholds further information, much to his frustration. She later reveals that she made a deal with Echidna in order to find the location the last frog required to complete the genetic sequence of the Genesis Frog; Echidna would reveal its location to Jade if Jade promised to bring all of the kids' planets, inhabitants and all, with her when the kids escape the scratch.

Doc Scratch reveals to Rose that her Quills are sharp enough to operate the Beat Mesa and activate the scratch; it was later revealed that Jade woke her Denizen up by lighting the forge and got

the Quills from her through shenanigans. She then sent the code for them to John so he could activate the scratch.

After Jade reached god tier, she followed through with Echidna's request, bringing Skaia's battlefield and the four Lands through the Fourth wall. There is a statue of Echidna on LOFAF, and a smaller statue that Meenah finds in Openbound.

Much later Kanaya consulted with this version of Echidna, with Karkat at her side. She released the genesis frog for her, under the condition that she protects Karkat so that he can lead the new universe.

Kanaya consulted with Echidna (along with Karkat) for frog breeding, just like Jade has done with her version of Echidna. Echidna offered Kanaya an unrevealed deal in the trolls' session, but Kanaya turned it down as she couldn't see how she could follow through on Echidna's demands. She later demanded that Kanaya fight her, which she did; this implies that Kanaya killed her, which was also the case with Karkat's, Vriska's, and most - if not all - of the other trolls' denizens.

In the original pre-scratch trolls' session, Echidna advised the trolls on initiating the scratch to give their species a fighting second chance at successfully completing a Sgrub session. Aranea, with the assistance of Porrim (the pre-scratch trolls' space player), were the trolls who bargained with Echidna. It is unknown why Aranea was the one who consulted with her rather than their hero of space, although it is worth noting that Aranea, like Kanaya, is of the Sylph class. Her quills served to activate the scratch in this session as well. This circumstance and that she seems to be the Denizen associated with the Aspect of Space make it likely that she is a constant in "healthy" sessions of the game.

Alternate Calliope (the one who dominated over Caliborn) had Echidna as her denizen. She consulted with Echidna after starting her dead session which she could not complete, and after being given a choice, she voluntarily chose to be killed by Echidna.

Her statue has two tails and lots of quills, perhaps mirroring the spikes on the backs of Jade's consorts. If Echidna shares her appearance with the icon of Jade's browser of the same name, then her skin is colored blue, just like the lizards' skin, pictures on Jade's shirts, and John Egbert's typing color. Also, it should be noted that Echidna was depicted as a half-human, half-snake monster, so we can see her head and breasts on both browser icon and statue on LOFAF, although both versions lack hands; the browser icon's version has a white human part and blue snake part. It also could be noted that two snake tails replace Echidna's legs. The tails on her icon version may just be of different colors to differentiate them.

Echidna's lair is first seen when Jade, Jane, and Calliope come upon a dream bubble memory

of it, after Calliope's dream bubble seemingly fell apart. The lair appears to be tunnel-like

in shape, and consists of rocky and crystalline structures, with magma seeping out of the blue ceiling and flowing along the ground. There also appears to be a significant amount of pooled lava

, and Echidna apparently resides in this body of liquid comfortably.