Ectobiology is a science that allows the cloning, breeding and genetic modification of an organism using appearification. Players of Sburb and their ancestors or guardians are created via ectobiology, with the exception of Dad Egbert/Crocker. John performs the ectobiology in the pre-scratch kids' session and Karkat in the post-scratch trolls' session. It would appear that the only known Sburb players not paradoxically created through ectobiology are Calliope and Caliborn, who are the offspring of two adult cherubs. It's unknown if fedorafreak and his server player 2busy4this were created ectobiologically.

Its processes are apparently easily automated, and the Homestuck universe houses several machines dedicated to specific ectobiology tasks. Many of these are in labs within The Veil. Mom is also known to possess a semi-functional one.

John Egbert uses the chumhandle ectoBiologist on Pesterchum, although he was likely unaware that it was a real science. He adopts the handle after Terezi used the term in a conversation with him. Ectobiology coincidentally involves Green Slime Ghosts, more or less.

In the lab near her house, Rose finds and names Mutie, which an imperfect cloning machine created from the paradox ghost imprint of Jaspers. Since failed paradox clones have strange mutations, Mutie has extra eyes. Only a perfect paradox clone can become itself; in fact, such a clone is guaranteed to do so.

When John attempts to appearify the ghost slime of Nanna, Grandpa, Bro and Mom from the 1st, 3rd, and 4th of December 1995 and the 13th of April 1996, respectively, their ghost imprints are created and sucked into four cylinders on a perfect-cloning machine. The imprints are analyzed for their DNA code, which is used to make the four as babies. The imprints are then combined and redivided into John and Jade (siblings) and Rose and Dave (siblings). This is part of a sequence prepared by Dad, Grandpa, Mom, and Bro themselves (although this detail was unseen). John executes the sequence creating, in total, eight babies.

When using an Appearifier, the regular function is to transport one thing from another point in time and space to that current point of time and space. However, if appearifying would result in a paradox (such as in the case of Rose trying to appearify Jaspers before Rose would later actually appearify him

), a green Paradox Ghost Imprint is created instead that collapses into a pile of slime.

An Ectobiology Apparatus is a machine used to intentionally appearify said paradox slime for ectobiology and has a tube that is used to contain the paradox slime from the target. These apparatuses are found in the ectobiology lab in the Veil, next to an associated Cloning Pad, and have at least enough tubes for the multiple performances of ectobiology needed to create that session's players and if a scratched session, their counterparts.

A similar device is found in the Phernalia Registry, for use by Space players. However, this device differs in one respect: it is, relatively speaking, downright tiny. This is because it is intended for the cloning and breeding of a special species: Frogs. Its Ectobiology Terminal is also deployable. 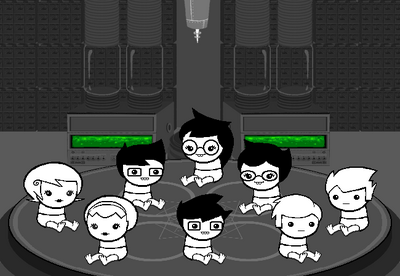 The results of ectobiology are known as paradox clones.These are a clones made from a Paradox Ghost Imprint, which is the result of trying and failing to bring someone forward in time by using an Appearifier. The person cannot be brought through time without creating a paradox, and thus becomes a clone. The clone ends up going back in time again to become the original target of the appearifier. Kanaya explains this to Jade during one conversation

They can be broken into 3 types: Perfect clones, mutations, and breeding.

Perfect clones are made by taking a ghost imprint of a person and creating a perfect clone. The resulting spawn is sent back in time to grow up and become the thing that was cloned in the first place. Thus, a perfect paradox clone must always be destined to be sent back in time. Jane Egbert, Jake Harley, Dirk Strider, and Roxy Lalonde were created by John this way. Paradox clones are a classical case of an ontological paradox. Essentially, for example, Jane is cloned and sent back to the past to grow up and become cloned in the first place.

Mutant clones are made in the same way, but are mutated, as they are not destined to be sent back in time to become themselves. Mutie is a clone of Jaspers, but since Jaspers is not a paradox clone and never was, the resulting clone ends up as a mutation. Apparently, a setting can be modified in order to induce mutation to prevent the creation of clones that are destined to travel back to become themselves. Deliberate mutation is necessary in the creation of the Genesis Frog.

Mom seems to have attempted to paradox clone Jaspers, but her attempt failed, and the resulting clone was the mutated kitten Mutie. However, as Mutie later joined Mom on her meteor as a baby, it may in fact be an ancestor of Jaspers. Rose accidentally created another trying to appearify Jaspers, but the result was a horribly mutated kitten

that was killed a few minutes afterwards by a meteor.

Breeding is done by combining 2 (or more) genetic samples; a resulting combination of this DNA is made in a way similar to regular breeding. Due to the nature of paradox space, something bred through ectobiology can still travel back in time to become part of the sequence of events that lead to its creation in the first place.

John, Rose, Dave, and Jade are examples of breeding, as they were created by mixing DNA of their guardians. The Genesis Frog is also created through a combination of breeding and induced mutation.

First guardians are also created through ectobiology as a unique case of breeding, as the genetic code for their power is inserted into the process through the ectobiology equipment, as opposed to through ectobiology itself. Becquerel was created by the Draconian Dignitary mixing the “MEOW” DNA code with the DNA of Halley. Doc Scratch was created through a similar process involving Lil Cal, a magic cue ball, and the “t1CK” “t0ck” “8r8k” “H34DS” “honk HONK” code, which may have just been a fragmented version of the “MEOW” code. 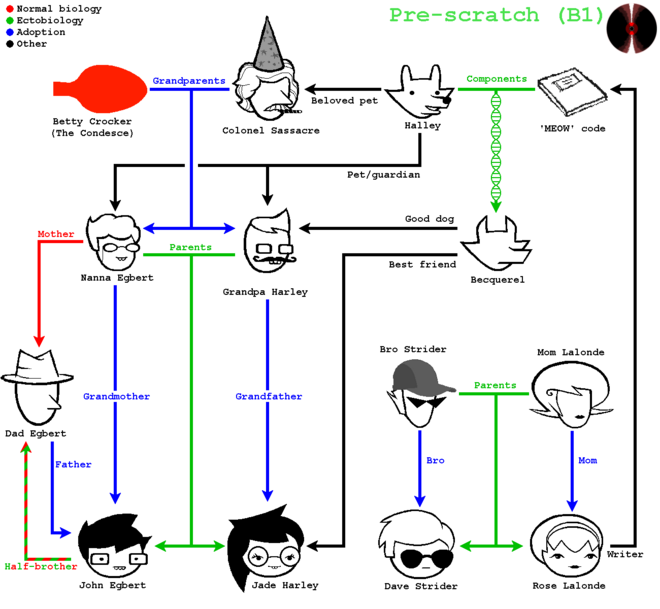 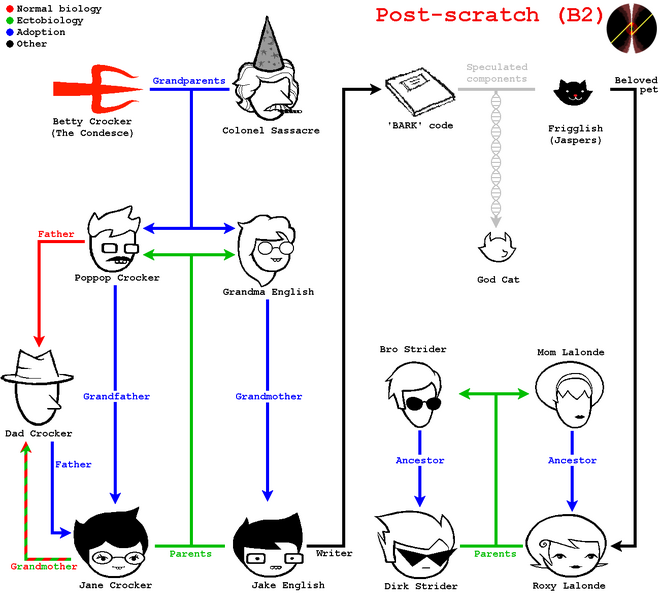 Ectobiology in the troll's session[] 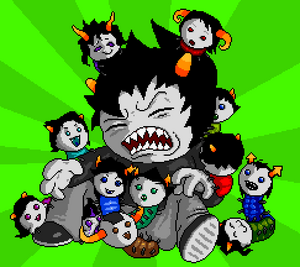 . Because of this, it is presumed that the session leaders are usually responsible for creating the paradox clones. Certain elements of how he did so are not known yet, such as how the DNA was mixed in producing the offspring (by analogy with knowing which B2 humans are the genetic parents of which B1 humans). It is also not explicitly stated which of the two troll groups was cloned and which was bred, though the narration's description of his experience implies he and the other A2 trolls are the paradox clones, and the A1 trolls ("ancestors") are the offspring.

Successful paradox clones of players and potential players are taken to their planets on meteors during the Reckoning, where they crash land at various locations and times (which are considered their birthdays).

This offers a possible explanation for the players' and their guardians' powers befitting their mythological roles, especially in cases where the person in question is not a player; being created through the use of Sburb, their powers could be implanted by the game at their birth.

It is unknown if the ectobiology process for the trolls would actually create "siblings" among the genetically-combined players or if it would tamper with their mating processes, as it already concerns them taking part in an "incestuous slurry