John's house in The Medium.

The residence of the Egbert family, John and his father . This charming suburban home includes two bedrooms, a bathroom, an upstairs hallway, a balcony, a living room, a study, a kitchen, a utility room, and a front and back yard. The decor is dominated by Mr. Egbert's insatiable love of harlequins, clowns, and funny men. The house was located in the small suburb of Maple Valley, Washington

. Not too far from the house's original location was a small body of water, named "Pipe Lake" in real life. In one of his Formspring answers, Hussie suggests that Dad chose the location specifically because of the name of the lake. Hussie also indicates that John's specific house was one that was for sale at the time that he assigned GPS coordinates

to it in the comic. 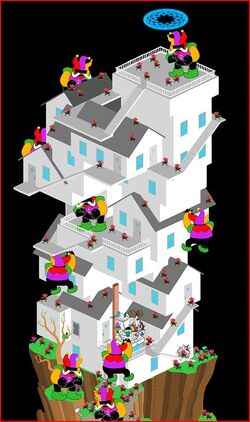 John's house has gone through a lot since the arrival of the Sburb Beta, being alternatingly expanded and torn apart by Rose Lalonde. After nearly being struck by a Meteor, the house now resides in the Land of Wind and Shade, a planet in the alternate dimension known as the Incipisphere, thanks to the mysterious workings of the Cruxite Apple. Here, it was broken into and invaded by strange oily monsters. With Rose trying to build up the house to reach The Seven Gates floating above combined with the monsters' destructive tendencies (and Rose's attempts to kill those monsters), the humble home is mutated into some architectural nightmare beyond comprehension.

Before the Cruxtruder was opened, John's house and neighborhood were seemingly in no danger. This is in contrast with Rose's house and Dave's house in that their houses and neighborhoods were clearly threatened directly or indirectly by the meteors sent by the Reckoning.

The living room is on the first floor. There are doors leading to the front yard, the kitchen, and the study, and a stairway leads up to the hallway. There is a TV on one wall. The room hosts an impressive fireplace and above the mantle is a picture of John's deceased grandmother and her current residence, a Sacred Urn.

When John first enters the living room, he finds a large present downstairs from his dad, which turns out to be a harlequin doll. The door leading outside was, for a time, blocked by a rather carelessly placed Cruxtruder. After John enters the medium (specifically the Land of Wind and Shade) the Shale Imps and Crude Ogres trash the entire house, leaving many inky stains in the living room, as well as damaged walls.

The kitchen is on the first floor and is where John's Dad has spent an awful lot of time baking cakes for him. It contains a refrigerator, a stove, a "delicious looking" potted plant, a smoke detector, a telephone, a broom, and, interestingly, Death's cabinet of board games. It can be accessed through the living room and leads out into the utility room.

John's Dad was abducted from the kitchen and taken to Derse. There are oily drag marks on the ground indicating there was a struggle of some sort.

A close look at the refrigerator reveals a crude drawing of the Green Slime Ghost, drawn by John one week ago.

The kitchen is currently full of tons of cookies baked by Nannasprite and various kinds of imps.

The Study is on the first floor, and can be reached through the living room. It is the room in which John's Father spends most of his time. To the right of the door is John's father's desk. There are various items on it belonging to John's Dad including: an extra captchalogue card, a deck of playing cards, a fake can of peanuts, the April edition of The Serious Jester magazine, and a stray pipe. Next to the desk is a hat rack with a top hat, Pickle Inspector's bowler, and an umbrella.

The contents of the safe in the corner were unknown for quite some time, being revealed when the safe was used to crush a Shale Imp, revealing an extremely aged copy of Colonel Sassacre's Daunting Text of Magical Frivolity and Practical Japery|Colonel Sassacre's Text, newspaper clippings spanning several decades regarding meteor strikes, and a book entitled The Fatherly Gent's Shaving Almanac. Behind the safe was one of Dad's notes taped to the wall that gave the combination to the safe and claimed that, since John is able to read the hidden note, he must now be strong enough to lift the safe out of the way.

The piano in the corner had yet another pipe and two more harlequins upon it and the sheet music was open to Showtime. However, the piano was used against a shale imp, destroying both the imp and the piano, much to John's dismay. Now the corner where the piano stood holds the Punch Designix.

The wall behind it is decorated with a large mural with the cast of Cirque du Soleil's show "O."

The utility room is on the first floor. It can be accessed through the kitchen and leads out to the backyard. It is directly below the upstairs bathroom.

Due to the Cruxtruder blocking the entrance to the living room it is now the only way to enter and exit his house. It contains a washer, a dryer and a cabinet. There was also a Sledgehammer and a stray Strife Deck Captchalogue card which John took with him.

John's backyard is accessible through the utility room. Much of it has crumbled away after transportation to the Land of Wind and Shade.

The backyard contains John's swingset (albeit damaged) and the tree that the trick handcuffs had been hanging on as well as broken pieces of piano, various harlequins, a fake arm, cake and a pipe. The Green Slime Ghost Pogo was also in the backyard until it was pulled up by Rose, and eventually the entire backyard becomes taken over by various Imps. Once Rose begins to build higher toward Skaia, John never bothers to come back to his backyard and leaves behind whatever is remaining down there.

The bedroom of the mysterious Mr. Egbert. It is on the second floor, across from the bathroom. It is always locked and all are forbidden entry. Mr. Egbert has secrets. It was the final room in John's house to be explored and it held the most shocking twist yet.

Rose, as the Sburb server player, was initially unable to see into this room but gained visibility once John, her client player, had entered.

Rose dropped a safe through the roof of Dad's room, where it punched through the floor and landed on a Shale Imp in the study below. John showed interest in entering, but Rose insisted he not waste time. After defeating the Crude Ogres a huge piece of grist became lodged in the hole left by the safe. Collecting the grist, John jumped through the hole and into his Father's room for the first time.

Upon entering the room, it is revealed to be a very boring room, completely devoid of harlequins and instead dedicated more to pipes and business. John was left catatonic by this shocking plot twist. A box of Betty Crocker cake mix can be seen in one corner, and a poster of some pipe-smoking douche bag is hung over his bed. He keeps three pairs of shoes next to his bed and a tie rack on his wall by the door. On his dresser is a picture of John, a deck of cards and trick handcuffs. The hat rack has two different hats; one he normally wears and one that looks almost exactly the same as Problem Sleuth's.

John also found three birthday presents in the room, which Mr. Egbert presumably intended to give him. One was a box of Fruit Gushers, another was a full suit and tie, and the last was a Modus Control Deck and a dozen Captchalogue cards.

The bathroom is on the second story of the house, accessible from the hallway and across from Dad's room. It has a shower/bathtub, a toilet, and a sink. It is where John acquires the fresh towel and his Dad's razor. Neither the toilet or the tub currently work, as Rose tore them out during her experimentation with the Sburb server and never actually reconnected the pipes. The window looks over John's backyard. The cabinet beneath the sink is completely filled with canisters of shaving cream.

There are two hallways in the house. The first hallway on the second floor has exits to John's bedroom and downstairs to the living Room. On the walls of the hallway are at least one picture of a harlequin and one of someone who totally looks like Michael Cera wearing a Beagle Puss.

A railed balcony positioned directly over the living room and a great place for star gazing. The balcony doesn't have much on it, except for a telescope, which can be used to see meteors, if you're particularly (un)lucky. The balcony is where the Alchemiter is placed by Rose Lalonde. She created a pirate plank-like extension in order to bring John within range of the PDA that was rocketed out vis-a-vis his Sylladex. Most of the plank was sacrificed to regain grist, but a new set of stairs were created to lead up to a foundation for upward construction.

Jane Crocker
Jane's dad
Poppop (formerly)
The residence of the Crocker family (post-scratch), Jane and her Father. John's house is its pre-Scratch counterpart.

A railed balcony positioned directly over the living room and a great place for star gazing. The balcony doesn't have much on it, except for a telescope, which can be used to see meteors, if you're particularly (un)lucky.

The living room is nearly identical to its pre-scratch version, except that all the harlequins are now detectives and the picture of Nanna is replaced with one of Poppop, and instead of being cremated he was stuffed according to the old family tradition.

During Jane's first grounding, a refrigerator was blocking the front door, similarly to how Rose blocked out John using the Cruxtruder. The windows are also padlocked, and Jane assumes the back door was blocked with a safe.

The stuffed remains of Poppop later turned out to be the hiding place for Huggy Bear / Lil' Sebastian, who made a hole in the living room using a refrigerator.

For Jane's second grounding, Dad put a bathtub between the living room and Jane's room, similar to Rose using Sburb Beta to block John's room in a similar way.