Uses )( instead of an h, when using capital E's puts a hyphen before the E, capitalizes sentences. Smilies also have a tiara and goggles 38D, also uses nautical puns whenever she can, and fish puns sparingly.

Land of Dew and Glass

Feferi Peixes, also known by her Trollian handle “cuttlefishCuller”, is one of the Alternian trolls. Her associated zodiac sign is Pisces (♓), and her horns are shaped like the top half of her astrological sign. She is a sea dweller, and the former heiress to the throne of the Alternian Empire.

She was on the Blue Team.

"Feferi" was suggested by [X-Rok] and "Peixes" was suggested by Zuki. Her first name comes from Metasepia pfefferi, a poisonous species of cuttlefish. Her first name could also come from Feri, which is a form of traditional witchcraft - this is of note because she is the Witch of Life. Her last name is the Portuguese name for Pisces (as well as the Portuguese word for fish (plural)), and can be pronounced PAY-shes [citation needed]. Her name could also come from fairy and pixie, mythical figures associated with feminine attributes such as the natural element of water. Interestingly, on the subject of this latter theory, both creatures are in recent media portrayed as bright, cheerful, and helpful magical beings, but traditionally fairy folk were considered clever, beguiling, selfish, capricious creatures, a juxtaposition appropriate for Feferi and her ancestor, the Condesce.

Feferi first appeared in a teaser

. She is shown 'culling' a cuttlefish by jabbing in its general direction with a trident. She wants to redefine "culling" as “caring for the unfit and infirm”, hence her Trollian handle. She implements this belief through capturing aquatic creatures, such as aquatic hoofbeasts and thousands of cuttlefish, and grooming and feeding them for “their own good”

. She realizes that the animals she cares for are probably not in need of her help, and that the whole exercise is really kind of pointless, but she still finds it fun.

When Feferi enters the Medium, she takes her position on her planet, the Land of Dew and Glass (LODAG)

. In a similar display of strength to Equius

, she is able to soar straight into her first gate without any construction on her hive

. Once she arrives in the Land of Brains and Fire, she resurrects Sollux by waking his dream self on Derse by kissing his corpse

Shortly before the destruction of Derse, Feferi opts to sleep in Gamzee's horn pile against Karkat's orders while in the ectobiology lab

. When Jack Noir attacks Derse, her dream self is gazing into the Furthest Ring. She is swiftly sliced in half by Jack Noir, who leaves her floating there while he destroys Derse.

After Sollux and Eridan duel

, and Sollux is KO'd, Feferi attacks Eridan, who kills her with his magic “science wwand”, blasting a hole through her chest

. She later appears in a dream of Jade's upon the latter reaching the Land of Frost and Frogs, claiming to be dead

. However, since she still has not fulfilled Gl'bgolyb's prophecy, it seems we haven't seen the last of her.

Upon Sollux waking up, he said he was aware of Feferi's death and that she was “happy and 0k”

, implying he and Feferi had talked while he was knocked out.

Feferi's body was preserved by Gamzee, and she was later revived as half of Fefetasprite, along with Nepeta. Fefetasprite was one of the happiest sprites, and ended up "fefetasploding" due to rapidly being addressed as her separate components by Erisolsprite and Arquiusprite. After the sprite's fefetasplosion

, she returned to the afterlife with Nepeta, appearing

in a dream bubble with an alternate Eridan, and used her Life powers to heal the Wayward Vagabond.

Like Eridan, Feferi is a sea dweller. She was the last troll girl to be unveiled. She is a part of the Nautical Aristocracy, being the heir apparent to the title of Empress.

Of all the trolls, Feferi is the highest on the hemospectrum, and is a radical reformist in that she wishes to make Alternia a nicer place by redefining the word "culling" to mean "caring for the unfit". However, she seems to be very misguided, and her introduction page

hints that her ideas are very naive and likely would not work out the way she'd want them to. She does not put on airs of superiority like the blue bloods, and is never shown to be purposely cruel to anyone because of their blood color.

easily and is very perky and energetic when talking to other trolls. Feferi is eager and almost entirely optimistic and fearless. Even when confronted by the horrorterrors that terrified both Karkat and Jade, Feferi remains gleeful and insists that they are not so bad once one gets to know them. Her tolerance towards them comes from the interactions with her monstrous lusus.

Feferi is however rather condescending and seems to be masking a slightly rude and insulting side, which becomes a lot more apparent after her death, when she jokingly criticised Jade for not knowing what a lusus was and called Jade “stupid”

before pointing out she was dead. She also teases Vriska by playing a prank on her for fun, although this might be because she knew Vriska would appreciate it more than kindness.

According to the whispers of her lusus, Feferi will eventually unite two races. She initially believed that this prophecy corresponded to the Land and Sea Dwelling trolls, but when warned of the upcoming apocalypse, she discarded this notion, claiming “not all prophecies can come true”

. In retrospect, the two races could refer to the trolls and humans, since she was the first to contact the kids through the Furthest Ring.

Feferi dresses very colorfully for a troll, wearing golden jewelry, neon bracelets, fuchsia goggles, a multicolored skirt, and a tiara displaying the Pisces sign in purple. The biological differences between aquatic and land-dwelling trolls are unclear as of now, but both Eridan and Feferi differ from the other trolls in that they have fin-like protrusions on the sides of their heads. She also has a “Collapsing And Expanding Bladder Based Aquatic Vascular System”

which seems to correspond to a heart.

Feferi's strife specibus is 2x3dentkind. She also appears to have some level of incredible strength, as seen when she pulled a large whale lusus carcass through the water propelled only by her strength and swimming ability

. Her hive is a giant underwater palace, the bottom half of which is shaped similarly to a conch shell.

and worries about his getting out of line. After entering The Medium, she abdicates this responsibility because of how their one-sided relationship exhausted her emotionally, leaving Eridan distraught

. After being saved by Sollux, and later saving him herself

, the two seem to develop some sort of relationship, leaving Eridan angry at Sollux. In Kanaya: Return to the core

, it is shown that she and Sollux have started up a matespritship, as evidenced by the “<3” emoticon used by her after administering a playful jab at Sollux's mannerisms.

Feferi refuses to be pulled out of the current quadrant with Sollux to auspistice between Sollux and Eridan, calling Eridan's possible attempt “the oldest trick in the book” [citation needed].

Feferi seems to consider Kanaya a close friend, evidenced by her admitting to Kanaya that she did bear a lot of burdens, her lusus being one of them. She confides in her in one of their conversations that “it will be a relief not to )(ave to worry about keeping )(er voice down anymore! ”

She interacts with Jade multiple times, and despite their teasing seems to genuinely think of her as a friend. She even drops her quirk willingly for Jade on one occasion

Feferi seems to get along well with Vriska, which is shown in Past Karkat: Wake Up

, where she pranks Vriska, who is openly amused by her joke and even admits to Feferi that she is impressed by her antics. This could possibly be foreshadowing Vriska's close relationship with Meenah much later on.

She gets along well with Nepeta when they are fused together as Fefetasprite, and sticks with her even after they separate.

where she talks to Dave saying that her ancestor “was fuckin lame”. Their next interaction takes place in the Ministrife

when Feferi is summoned by Vriska. She claims that she's nervous and can't let Meenah see her because she's so “unbubblievably cool”. Meenah, wishing she never noticed her dancestor, suppresses her urge to kill.

, Meenah has seemed to dramatically change her attitude toward Feferi, by saying that she found it a shame that they were to have the same color blood. She even alluded to wishing for a closer "sisterly" relationship with her. [citation needed] Feferi seemed to never have had any urge to kill Meenah even though they share the same color blood. The reason for this is unclear, but may possibly be due to her lack of occupancy of the throne. She seems to look up to Meenah and is very impressed with her. 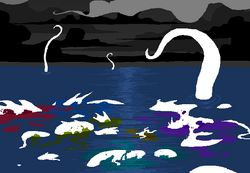 Feferi's lusus is a gargantuan squid-like mass of writhing tentacles named "Gl'bgolyb" (probably pronounced "glub glub"). It is the largest lusus of all the trolls by far - its size can be measured in miles (assuming the whale killed by Eridan is roughly 200 m (656 ft) in length, then, from beak to beak, Gl'bgolyb measures roughly 600–700 km, or 350–450 miles). Gl'bgolyb is an "emissary to the Horrorterrors" and whispers prophecies to Feferi. She feeds it other lusii that Eridan hunts and kills, presumably for Feferi's sake, to keep her lusus quiet. If Gl'bgolyb's voice ever rose above a whisper, trolls would start dying - the psychically susceptible lower castes first - and if raised to a shout, every troll on the planet - minus Feferi (and the troll empress, as implied by Andrew), who is apparently immune - would perish. But if Gl'bgolyb were to ever get “really upset”, she might release "the Vast Glub", a psychic shockwave that would exterminate every single troll in the galaxy. Though she is saddened by the forthcoming death of her lusus, Feferi expresses relief at not having to keep her lusus' voice down as a result.

The Vast Glub does go off and kills the original self of Sollux, although he has extra dream selves to use as spare lives. From an outside view, it would seem it was extremely foolish for her to prototype her Kernelsprite with such a powerful lusus, given that prototypings augment the powers of the Incipisphere royalty and underlings; however, Feferi explains to Jade that the prototyping happened because Gl'bgolyb died, and simply 'fell in' to the kernel, resulting in the foolish prototyping.

Gl'bgolyb, in return for Feferi's help in feeding it, has protected her for sweeps. Her lusus is the only thing standing in the way of the Condesce, who would otherwise have killed her due to Feferi's blood color making her a threat to the throne, just like countless slain potential heiresses before her.

During a conversation with Kanaya, she admits to seeing her lusus as a burden, but because of the protection she's received sees it as a good thing anyway.