and to “facilitate the planet's ultimate purpose.”

“A first guardian is typically almost as old as the planet itself, and each has a unique, circuitous origin through the knots of paradox space. They can be born into a great diversity of forms, though they all share a common, especially potent genetic sequence. The code grants them near omnipotence[...”]

The Green Sun is the source of first guardians' power

First guardians tend to be associated with the color white and, like many other kinds of guardian, are depicted as lacking most identifying features.

All known first guardians were created in ectobiology labs found in Frog Temples, and delivered to their planets on-board the Temple's meteor. Unique to the ectobiological process for creating first guardians is the inclusion of a written genetic code

, in each case sourced from the subconscious of one of the session's players, representing the unique genetic sequence that makes first guardians.

Doc Scratch is additionally special in that his genetic components were not living organisms but inanimate objects; however the presence of souls inside Lil Cal and mysterious nature of the magic cue ball may bestow those objects with their own DNA.

Owing to the cosmic source of their power, first guardians' abilities are similar to those of Heroes of Space. Among these are the ability to instantaneously teleport

both themselves and other objects, both from their immediate vicinity

and from separate locations

. Their own bodies act as portals through space through which objects can travel, and first guardians sometimes appear to expand their own forms to encompass other objects when transporting them from one place to another. The range of this teleportation is however limited to the universe over which the first guardian presides

, and an entity such as Jack Noir or Jade Harley that inherits these powers is limited to teleporting within the sessions and universes within the domain of the Green Sun.

, but they themselves cannot teleport there.

uncontrollably, and Becquerel and Gcat both seemed aware of things happening far away, possibly indicating that they are capable of seeing things happening throughout the Green Sun's domain. However a first guardian must be “merged with a host of great intelligence”

in order to be fully omniscient as Doc Scratch is. This may also imply that like Scratch, Becquerel and Gcat's depicted lack of eyes represents a literal lack of traditional ocular organs.

One of a first guardian's primary purposes seems to be ensuring that the life cycle of universes continues. This is done primarily through ensuring that Sburb is played; Becquerel does this, for example, by leading

Jade to John's gift, allowing them to meet in the first place. Gcat actively ensures that Jane survives to play the game by saving her

from an explosive trap set by Betty Crocker, and completed a long time loop necessary to the events of both the B1 and B2 sessions by causing the death of

In addition to his standard first guardian duties, Doc Scratch is also working to ensure Lord English's entry into his universe. 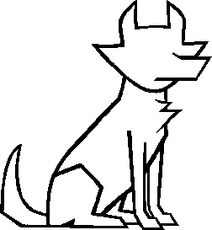 At the conclusion of Pesterquest: Volume 14 the MSPA reader absorbs the power of the Green Sun and uses it to “remove [the Friendsim and Pesterquest canon] from causation” and “lock it away”[1]. This becomes the Locked Timeline, and they describe themselves as “[i]ts first guardian.”

Upon becoming the first guardian of the Locked Timeline, the reader's dialogue begins to be rendered in white text on a dark green background when they speak in the narrative text in the first person, much like Doc Scratch.