Adds unneccesary amounts of spaces in between words.

>tfw another james roach track ♫
Folykl Darane is an Alternian troll living during the time period of Hiveswap and Hiveswap Friendsim. Folykl was first revealed during the Hiveswap Troll Call event alongside Kuprum Maxlol on December 13, 2017. Her bullet points were "quietly drains psychic energy like an app you forgot to close out" and "whats a shower". Folykl was featured alongside Kuprum and Elwurd in Hiveswap Friendship Simulator: Volume Six. She was designed by Poinko. Her bullet points were altered as from December 6, 2018 to "Hugely draining to be around" and "Greasy".

Folykl is an alternate spelling of follicle, in reference to the sheath of cells and connective tissue that surrounds the root of a hair, and is pronounced the same way. "Darane" could be a trollification of the word "drain", which fits with Folykl's siphoning ability. Darane is also Somali for "crazy", which may refer to her strange lifestyle due to her Voidrot.

Folykl is a goldblood presumably living in or near Outglut. Prior to the events of Hiveswap Friendsim: Vol. 6, she and Kuprum probably spent most of their time pranking highbloods as a source of amusement. She also relied on Kuprum in order to fight her voidrot. During the events of Hiveswap Friendsim: Vol. 6, the MSPA Reader stumbles into Folykl and Kuprum while hiding from a group of blue bloods. After spending quite some time ridiculing the player, informs the player that the blue bloods' confusion has been the doing of her and Kuprum.

If the player decides to take their insults lying down, Folykl will warm up to the player's bleak outlook of life. Despite Kuprum's protests, she insists that they hang out with the player for the time being. She then prompts Kuprum to give the player a demonstration of how powerful he is, which in turn causes the player to notice her lack of eyes. Upon noticing the player's shock, she pointedly explains the condition ailing her: voidrot. Due to this affliction, she is rendered unable to properly retain energy, hence her dependence on Kuprum to stay alive. Kuprum proceeds to mock the player for their apparent ignorance, and suggests that a R&R session (rampage and rending) in the cullfields with Trizza is in order. Unfortunately, the mere mention of the heiress puts Folykl in a decidedly foul mood, and the two begin bickering amongst themselves.

Their heated argument causes the player to remark that they have a strong kismesissitude going on, but the goldblood duo are quick to correct the player that they are actually in a pale quadrant. If the player lies that they have a stable moirallegiance (despite not knowing enough to make a valid remark), the duo will begrudgingly approve of the player. When the player suggests that perhaps it was time to call off the prank on the bluebloods, Folykl and Kuprum will sneer at the player and snap that highbloods deserve to be harrassed. Things go downhill for the player and the goldbloods when the bluebloods take their leave via chartered scuttlebuggy, while an Imperial Drone is called to the scene. Kuprum absconds their hiding place, levitating himself and Folykl before doing the same for the player. Even though they manage to outrun the first drone, they wind up being cornered by a second drone. Before a laser is fired at the three of them, Kuprum tosses everyone to safety. Folykl becomes briefly separated from her moirail, and cowers in fear when the drone focuses on her. She is saved when Kuprum reappears just in time to fry the drone's circuitry with his psionics. The moment Kuprum is done fussing over her, he inquires whether the player is still in one piece. The player reassures him that they're fine, thanks to them.

Should the player decide to stand up for themselves, Folykl and Kuprum will jeer at the player's offended reaction. After hurling another slew of insults at the player, they will scamper off laughing to themselves.

If the player comments that their moirallegiance could use some work, Kuprum will get angry and accuse the player of wanting to steal Folykl away from him. His rage and insecurity sends a surge of energy coursing through his body, of which Folykl absorbs hungrily. Once Folykl is done verbally sparring with Kuprum, she will claim that she's absolutely done with him and clamber off his backpack. She then approaches the player, taunting them for thinking themselves capable of providing her with the energy she needs to live. The player is stunned when she starts tongue-kissing them, but begins believing that they can do this just fine. But the player's euphoria is short-lived, as they suddenly feel Kuprum kissing the back of their neck; Kuprum is channeling energy through the player while Folykl sucks it back out. Folykl then waves Kuprum off, and proceeds to drain the player of all energy. Completely drained of all strength, the player topples to the ground, too exhausted to move. Fog begins to cloud the player's mind as they begin to drift in and out of consciousness, and the player laments not being able to obtain friendship.

Her personality, like Kuprum's, is somewhat based on 4chan culture. However, she is shown to disapprove of Kuprum's obsession with the empire and Trizza Tethis. This may mean she is based on one of the less political boards as Kuprum is, and just 4chan culture in general. A possible candidate for the board she's based on is /r9k/, which is stereotypically populated by unhygienic NEETs. Her second bullet point, "whats a shower", seems to support this claim, as 4chan users are stereotyped as messy and often unhygienic.

Folykl seems to find great joy in pranking highbloods due to her dislike of them. She was shown laughing and snickering at the highbloods' expense in Hiveswap Friendsim: Vol. 6 alongside Kuprum, and was proud to announce that it was Kuprum that hacked into the blue bloods' GPSs to lead them to the wrong part of town. When the player suggests that it was time to call the prank off, she dismisses the player's idea as idiotic. Even though she and Kuprum view highbloods as outright enemies, they have yet to inflict actual harm on them.

Even though they have nothing but disdain for highbloods, Folykl doesn't exactly feel any sympathy for the oppressed. This is evident when the player (mistaken for a burgundy) is lamenting about how brutal life on Alternia is as a lowblood, Folykl taunts the player for their apparent incompetence for not being able to keep their lusus and home safe. Kuprum later reveals that he and Folykl views everyone as inferiors to them without any regard to social standing, which might be a reason why she remains apathetic to the lowbloods' predicament.

As mentioned above, Folykl does not appear to pay any attention to personal hygiene. Upon their introduction, the player is quick to note that her appearance is unkempt, her hair is greasy and that she smells quite foul. It is not made clear why she opts not to take a shower, though Kuprum seems to have gotten used to her unsanitary presence.

Folykl is shown to have a less than ideal personality: she frequently insults the player (and probably everyone else) with relish, and gives the player a sudden and unwanted tongue-kiss. When the player is much too confused about the entire situation to do anything, she goes on the drain the player of their energy, leaving the player in a immobile heap on the filthy street. Once that's done with, she sarcastically thanks the player for the bit of energy that would sustain her for the next three minutes.

Due to her condition, Folykl speaks in a mostly sluggish manner, but uses informal speech laced with cuss words. She has no problem with ridiculing anyone and everyone she meets, and appears to enjoy mocking other people just for the sake of doing so.

Folykl seems to have a dysfunctional moirallegiance with Kuprum, given the amount of time they spend bickering among themselves. Since most of their arguments are centered around Kuprum's staunch support for Trizza, it can be inferred that she does not want Kuprum to become a battery for the Empire, or is simply fed up with hearing Kuprum's constant praise for Trizza. Even though they quarrel constantly, she does care for her moirail. This is best illustrated just moments after Kuprum is done shutting down the drone with his psionics; when he asks whether she's alright, she reassures him that she is fine, affectionately referring to him as an idiot. 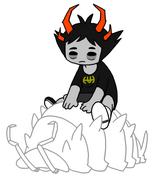 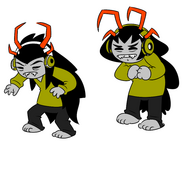 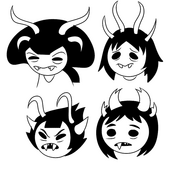 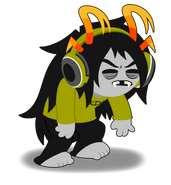 Retrieved from "https://mspaintadventures.fandom.com/wiki/Folykl_Darane?oldid=243540"
Community content is available under CC-BY-SA unless otherwise noted.