A frog temple on Earth in the distant past.

The Veil (pre-Reckoning)
Earth (post-Reckoning)
Alternia (post-Reckoning)
The frog temples are large, mysterious structures that originate on meteors in the Incipisphere, each with a giant frog statue on top. They are delivered to their host planets during the Reckoning and are the first meteors to arrive at the planet, delivering the temple and the planets' first guardian. The temples contain various equipment which may vary between sessions, such as the ectobiology equipment for the creation of the first guardian, a Lotus Time Capsule and transportalizers to Prospit and Derse. Its connection to Sburb causes vast amounts of weird plot shit.

The giant frog represents the Genesis Frog, the patron god of frogs, and is responsible for the importance of amphibious and reptilian life in Sburb. This is due to him representing creation as his role as the universe the players strive to create. Because of this, frogs are venerated by Prospitians, but considered loathsome, abhorrent creatures by the Derse royalty. Imagery and idolatry depicting frogs is highly illegal in jurisdictions under the control of Derse.

The temple and surrounding structures form a complete model of the Incipisphere. The large central structure has one adjacent stone sphere with its own satellite, surrounded by a specific number of stone spheres, and another sphere with satellite further away, outside the crater rim. In locations with water, giant lily pads have been shown to grow around it, with Jade being able to summon seven lily pads to pass to the central structure from one of the spheres surrounding the temple. The Seven Gates are also seen marked on the side of the temple, representing the ascent through them to Skaia.

The frog temples on each planet contain a sequence of hieroglyphs that provide the code for Sburb. Grandpa and Sollux Captor used them to write the code for the games in their respective universes.

The frog temple on Earth is on a Pacific Island. Jade and Bec play-fight atop the frog statue in Act 3. Jade later gains access to the temple, after sneaking in while Bec sleeps. She finds a lotus time capsule with a countdown. When the countdown finishes the flower opens, revealing Dave's copy of the Sburb CDs. Jade expels all the items from her Sylladex and leaves most of them behind when Bec sends her back to her room.

The temple is threatened with destruction when Jade's meteor looms overhead. However, Bec destroys the meteor, and the temple is left intact as Jade's house and the volcano are transported to the Medium. 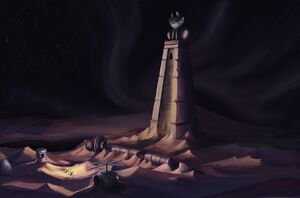 In 2422, the temple is inhabited by the Aimless Renegade, and many of Grandpa's weapons seem to be up there. Many of Jade's belongings are also there and have been for hundreds of years. The Wayward Vagabond flies there on the Skyship Base at the end of Act 2. Soon after, Peregrine Mendicant flies there in the Helipod Base and Windswept Questant also flies in using the Eggy-Looking Base. After Wayward Vagabond and Peregrine Mendicant both arrive they are attacked by Aimless Renegade at the foot of the temple, destroying an external pillar in the process. The conflict is later resolved when AR surrenders after seeing Bec's head carved on a pumpkin. Aimless Renegade later enters the temple to retrieve the Cookalizer and refrigerator that Jade left behind in the past.

The Authority Regulator comes across the temple's meteor in the Veil and notes how very illegal it is. The Draconian Dignitary enters the temple and accidentally deposits Dave's Sburb CDs in the Lotus Time Capsule, which is set to release its contents in 413 million years. The meteor strikes the area of Jade's island in Earth's prehistory. After the impact, the temple leaves some sort of seed and is somehow reconstructed at the impact site.

The trolls' Sgrub session includes two versions of frog temple. They are similar to the one on Earth save for the fact that the large central structure is surrounded by six stone spires and not four. One is in an underground cavern discovered by Aradia, and the other in a desert near where Kanaya lives. It's interesting to note that these are the Time and Space players of the session. The first is blue in hue and the statue representing Prospit was destroyed, representing the dream selves of the Blue team residing on Derse. Aradia desecrated the ruin and prototyped her Kernelsprite with the head of the statue. The second temple is red in hue and has had its Derse statue lost, representing the dream selves of the Red Team residing on Prospit. The bottom half is buried in the red and blue sand.

, they form a full set of 12 planet statues, one Derse statue, one Prospit statue, and one intact frog statue (which likely represents Skaia, therefore it makes sense for it to be intact on the Prospit dreamers' temple). This clearly parallels the combination of the Red and Blue Teams into a single one through the Mobius Double Reacharound.

The Seven Gates are seen on the side of the temples, confirming that there are that many gates regardless of the number of players.

There are eight instead of four spires surrounding the frog temple near Jake's house; this is because Jade brings the pre-scratch session's planets with her from their session to the new one.

by the Condesce and Jack Noir, and also mirroring the final state of the pre-scratch session, where Prospit and its moon are ruined, and Dave cuts Derse's moon adrift.

Furthermore, deep within this temple are two transportalizers, one purple and the other yellow. These two transportalizers lead to Derse and Prospit respectively, and are likely the reason that Grandma was able to enter the Medium before the actual game started; the same is likely true of Grandpa in the pre-scratch session.

While it has yet to be seen, it has been revealed that Meenah found Sburb on the pink moon of Beforus; since the coding for the game originate in the temple, it is likely that pre-scratch trolls' temple was located on the moon.

The cherubs' dead session had no reckoning, so a frog temple was never delivered to their planet. It is unknown how they obtain their copy of the game, but it possibly has something to do with Gamzee. Technically, the remains of the post-scratch kids' temple could be present on the planet, as Lil Sebastian would have been excavated from the vicinity of the temple's old location. They may not have been necessary, though, since Gamzee would have still had the copy of the game that he himself had played.