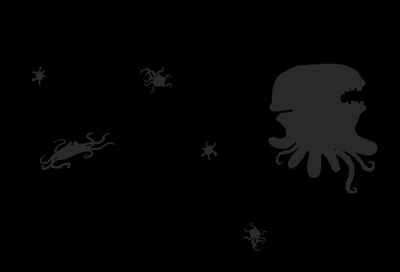 The Furthest Ring is an infinite space that exists outside of all universes. It physically borders the outside of every Incipisphere, containing the orbit of Derse and separated from The Medium by The Veil. As mentioned in Rose's Grimoire the ring is home to a number of eldritch monstrosities, including Fluthlu, Nrub'yiglith, and Oglogoth. The most powerful of these monsters are the Noble Circle of Horrorterrors. Dersite Dreamers are able to see and hear the Horrorterrors by staring into the space beyond Derse.

Temporal and spatial factors are far less than constant in the Furthest Ring, due to it existing beyond any universe and therefore never having the spacetime principles solidified; the deeper into the Ring one would get from their session, the less stable time is, and as one spends more and more time in its dark reaches, space becomes less reliable as well.

There are computer servers of unknown origin in the Furthest Ring. Rose uploaded her walkthrough to one of them, making it accessible to other sessions. It was retrieved by Kanaya, who uses it to guide the trolls through their session. The code to summon Lord English also exists on another such server.

All Sburb players with only one remaining self will dream of the Furthest Ring, regardless of whether it was their dream self that died or if their real self died and was replaced by their dream self. There they may dream in bubbles glubbed by the Horrorterrors, or catch a glimpse of the Horrorterrors themselves. Karkat and Jade were horrified by this experience, but Feferi was unaffected, probably due to her experience with her Lusus, Gl'bgolyb. Curiously, Vriska showed no indication of having dreams in the Furthest Ring, despite having only one self for the majority of the trolls' session.

The Furthest Ring also serves as a kind of afterlife in general, at least for players of Sburb. Aradia explains to a dead Dave that the living can access this afterlife under certain circumstances to share dream bubbles. Two general means to do this are known: Dreaming with only one self remaining, or physically entering a dream bubble. A third special means exists through the use of splinter selves which may manifest themselves out of the subconscious of those dreaming in the ring, however they are not the original person and remain as independent beings. Dirk Strider is the only one known to have such splinter selves. As part of the dreamer's subconscious only those who are the source of them can see them, along with those with powers relating to minds.

It would appear that the Furthest Ring is what houses the space between any two fenestrated walls, or at least the ones owned by Roxy Lalonde. This is shown here,

where Roxy is able to access what appears to be a dream bubble when she is trapped in the space between the two walls.

A series of events within the Furthest Ring have led to an increasing number of the eldritch beasts dwelling within being destroyed; they have contacted the kids' Dersite dreamers to aid in their plight.