in Homestuck that John Egbert and Dave Strider read. Though both of them believe that the magazine isn't worth the time, Dave reads it - and writes satirical online reviews of it - for ironic purposes.

The latest issue had a bad review of Sburb; though the author of the article never even played the game

, he gave it one and half hats out of five for its inability to "thrash anything" before going into a discussion of the sweet times he had with his brosephs recently. John burns the magazine in the living room fireplace later on.

Every issue is guaranteed to be printed on 40% recycled asbestos: "For big ups to Mother Earth, yo."

The Strider's living room is littered with back issues of GameBro. Dave captchalogues and then punches a copy of GameBro, finally "upgrading" his Alchemiter to an utterly useless heap of shit with it.

A vintage copy of Gamebro was created with the Alchemiter by Dave, using the Timetables along with a regular copy of GameBro. It is unknown what is within the issue.

Game Grub is a parallel magazine read by the trolls, particularly Karkat Vantas and Sollux Captor. It seems to be written in the Daedric alphabet, and often boasts about "exclusive leaks".

GameGrl is a different edition of GameBro, possibly by the same creators, existing only in the post-scratch universe. It seems to be more female-oriented than the original, given its title and pink fonts. An issue of GameGrl is shown on Jane Crocker's desk, and another near Roxy Lalonde's game consoles. 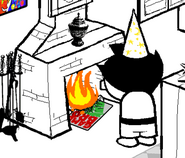 A container of baby food with what is possibly a GameBro logo.

The stock image used for GameBro's face.
Retrieved from "https://mspaintadventures.fandom.com/wiki/GameBro?oldid=243974"
Community content is available under CC-BY-SA unless otherwise noted.