A Giclops is a very powerful underling. The name is a portmanteau of the words "giant" and "cyclops". They have one eye, a prominent brow, and a spiked head. Little is known about this enemy as of yet, though they appear to be much more powerful than Ogres and Imps. 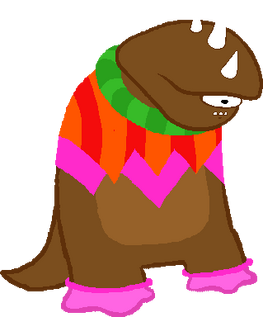 The Copper Giclops is first seen along with Tar Basilisks attacking a small Salamander village within the Land of Wind and Shade.

The Giclops is possibly the toughest enemy encountered by John before Cascade, with his attacks using the Wrinklefucker failing to make even the smallest dent in his health vial. The massive beast takes the Sassacrusher right out of the Remote Ghost Gauntlets. Luckily it never has the chance to use this powerful weapon against John, as it would no doubt demolish his health vial in a single shot.

It retreats after Grandpa shoots it in the eye with his blunderbuss, which causes only around one sixth of its health bar to be depleted. Notably, the creature leaves with John's Sassacrusher in hand, although he could always just alchemize another one if he needed to.

The Ruby Giclops appears in the Land of Heat and Clockwork. Future Dave makes short work of it. It may not be as strong as the Copper variety. However, Dave could slay it more easily possibly because he is at a very high level when he fights it. It drops large amounts of Ruby Grist.

In the end of act 4 flash animation a giant maroon Giclops can be seen at the base of Dave's house. Some more unknown Giclops variations are fought by John on LOHAC as he activates the Scratch, those are yellow and orange.

Several Giclopes are seen in the trolls' session. A light blue Giclops was decapitated by Aradia Megido on her planet LOQAM, a muddy yellow one was faced by Kanaya on Equius' planet LOCAS. It can be assumed that the other planets feature Giclopes as well, although we never see them.

Retrieved from "https://mspaintadventures.fandom.com/wiki/Giclops?oldid=224509"
Community content is available under CC-BY-SA unless otherwise noted.