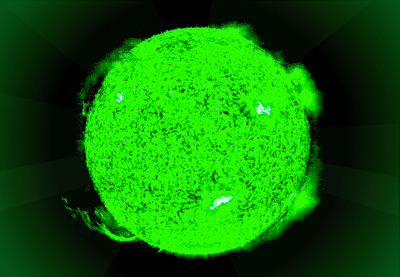 is a giant sun in the middle of the Furthest Ring, nearly twice as massive as Earth's universe (and in fact, as massive as Earth and Alternia's universes put together) There is only one in existence, and it is the source of the powers of all first guardians. The pre-scratch kids and post-scratch trolls intended to destroy the

so that Jack Noir would lose his power. According to Doc Scratch, the destruction of the

would result in the destruction of the first guardians.

It was created after Dave and Rose detonated The Tumor in Paradox Space, destroying both Earth and Alternia's universes to fuel it - having been led to believe (by Doc Scratch) that this would destroy the Sun, not make it. In actuality, Doc Scratch never said it would destroy the sun, only that it had the potential power to do so. Rose simply did not ask him the right questions.

However, Jade says that the

“presides over our universe”, and that destroying it would have been disastrous. She also mentions that it presides over multiple universes and sessions at once, asking John to “think of it like a giant solar system, but instead of planets revolving around the sun, there are many universes”

. This implies that Rose and Dave's mission, even though they were fooled into creating the

instead of destroying it, was still important, and still had positive results for the future of our heroes.

It is referenced by carvings inside a turtle temple on the Land of Light and Rain. Rose, ignoring the advice of Kanaya, rips the temple out of the water and dismantles it with the Thorns of Oglogoth to find the

carving inside. A representation of the sun appears to be carved into the likeness of a giant captchalogue card.

An image of the

can be seen briefly flashing when Bec uses his powers; its first appearance was during Jade's strife with Bec

, which was also Bec's first appearance. However, the only other known first guardians, Doc Scratch and God Cat, never display this visual effect while using their powers. It may be that the appearance of this power varies for different first guardians.

It is also seen when Jack Noir attacks Aradia, at which point she slips through him into the Furthest Ring, the

right in front of her. She then ends up at the

, but then leaves it to explore dream bubbles.

At the end of Jade's entry

, a stylized green sun is shown woven into her bedsheets. This is because Becsprite made a sprite power copy of her bed to catch her, turning her sheets green and white.

In the opening sequence of Seer: Descend, a picture of the

flashes amidst a barrage of other images; it is quickly followed by a second picture of a pink sun, that might correlate to a sun we have not yet seen, or correlate to

, where Kanaya says to Rose

“GA: Your Hubris Is Really Astonishing
GA: Easily Twice The Mass Of A Universe I Think
GA: That It Hasnt Collapsed Upon Itself Into A Tiny Lavender Singularity Is The Most Striking Marvel Paradox Space Has Coughed Up Yet.”

It also may be hinting at the dual moons of Alternia, or be present in the animation simply for aesthetic reasons, as this is never brought up again.

It is destroyed during Act 7 by Alternate Calliope, who transforms it into a black hole. During the credits, it appears to be consuming the Furthest Ring, sucking in both ghosts and chunks of empty black void and the ramifications of this event are explored on the epilogues.