Grist is the name of a range of resources used in Sburb. In order for a server player to manipulate their client's surroundings, they must expend the most basic type of grist, build grist. Other types of grist are used as the ingredients to create objects with the Alchemiter. Grist can be acquired through victory in Strife, or by recycling objects into the grist components that are used to create them. More powerful enemies seem to drop exponentially higher amounts of grist, as imps drop hardly any, relatively speaking, while Denizens drop enough for the Ultimate Alchemy.

The most up-to-date grist cache seen so far in Homestuck is in the LOHAC Stock Exchange, in the top right of this screen 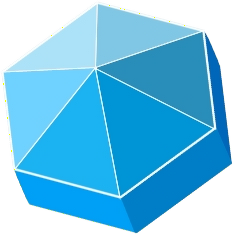 Build grist, which takes the form of a blue elongated hexagonal bipyramid, is the most common type of grist.

Build grist is primarily earned by the client player during Strife, and is then utilised by the server player to modify the client's domicile: altering room dimensions, creating new floors, stairs, or ladders, and moving/placing/copying/pasting objects. Each additional server/client pairing enters the session with an increased quota of starting grist. John's server has 20 (2×101) build grist to start with, while Rose's server has 200 (2×102), Dave's server has 2,000 (2×103) and Jade's server has 20,000 (2×104). This implies that in the trolls' session, Karkat may potentially have started with a whopping two trillion (2×1012) build grist as Sollux's server, unless larger player chains gain grist in smaller increments precisely to avoid this kind of ridiculous quantity.

It should be noted that although they resemble Rockin' Blue Raspberry Gushers, attempting to ingest any amount of build grist – and presumably any other grist types, for that matter – is considered an "idiotic and frivolous action", as they are gaming abstractions that do not exist on the physical plane during the Sburb session. Upon touching the client player during a session, the grist is stored in the grist cache. Server players are unable to interact directly with grist and must rely on their clients to collect it for them. Build grist comes in several sizes, with each size being worth a different amount of grist. The exact quantity of build grist dropped by an opponent seems to be randomly determined, with only the general order of magnitude determined by the opponent's nature.

Build grist is also a component of most alchemized items, though the amount needed varies. For example, John's awesome Pogo Hammer requires 10 units of build grist, as well as 16 units of shale. While the type of building material needed for a particular item seems to be determined by certain aesthetic qualities of the desired object, build grist often acts as a generic requirement for construction – if you're ever in need of perfectly ordinary 'stuff', build grist will probably be involved in the creation of it.

The grist cache implies that there are thirty-six different types of grist, but thirty-eight types have been clearly shown (although only twenty-one of these have been named), making it unknown how many types of grist there are. Displays have also shown what appear to be 12 additional types of grist. While build grist is used mostly to alter the client's environment, the other grists' purpose seems to be to be used in conjunction with the Totem Lathe and Alchemiter.

Some displays have shown what may be at least twelve additional unnamed grist types.

Combining the Problem Sleuth game with the Claw Hammer makes something which requires build grist, mercury, and three grist types not yet encountered by John. They could be Elf Tears, Weasel Snot, Hog Slop, or Pie Filling. Alternatively, they could be replaced with a similarly colored eyedrop shaped grist, like tar or amber.

Grist may be transferred from one user to another using the GristTorrent client. When a player collects more grist of a type than their cache limit will allow, GristTorrent places it in the Grist Gutter. From there, it is gradually redistributed to other players who have room for it.

Since one can recycle items into grist, much like how Rose and Jane did, it is possible to simply recycle any unneeded items into grist for use later or to possibly find new types of grist. This should be approached with caution however, as weird plot shit or weird puzzle shit may make this dangerous.

Some objects such as the SBAHJifier cost negative amounts of grist, hypothetically allowing players to acquire infinite amounts of grist by creating these objects repeatedly (although this has never been shown in-universe).

Retrieved from "https://mspaintadventures.fandom.com/wiki/Grist?oldid=214423"
Community content is available under CC-BY-SA unless otherwise noted.