The Half-Harley Manor is a significant location in Hiveswap and Hauntswitch. Joey Claire and Jude Harley live here during 1994, but it is heavily implied that A. Claire and Jake Harley also lived here before she died and he left. The manor is filled with artifacts and other trophies found by Jake during his adventures. After Jake's departure, the house became incredibly dirty and unsanitary as Joey and Jude do not clean up the house very often. It is on the outskirts of the town of Hauntswitch. The manor is the primary location in the first half of Hiveswap: Act 1.

Its original name was Harley Manor, but due to Joey taking her mother's last name, Claire, Jude has been referring to it as the Half-Harley Manor. It is unknown if Joey refers to it as Half-Harley as well, but due to her spite of her father, she most likely does not.

The bedroom of Joey Claire is quite messy with her toys and other belongings thrown around. Joey keeps a lot of her personal and private belongings in her room, as evident by her diary and her mother's heirloom. Her room has glow-in-the-dark star stickers pasted all over her walls and ceiling which illuminate the room when it's dark. She keeps a lot of her games and puzzles in here as well, as shown when she attempts to play "Simon Says". Her television does not have cable, and is used solely for her SNES gaming system. Joey also has an abundance of stuffed animals, which are scattered on the floor and on shelves throughout the room.

The door to Jude's room is covered in caution tape and alien decorations. There is also a transparent tube that comes out of his room that Jude's pet uses to travel around the house. We do not know what the inside of Jude's room looks like, or what his pet even is.

The attic is the highest point in the manor. In the attic, there are more artifacts Jake recovered on his adventures, and at the very end of the attic is the Cherub Portal. Joey is advised by Jude to head up there in order to protect herself from the monsters. When she goes up there, she inserts her heirloom inside the Portal and is transported to Alternia as Dammek is transported to Earth.

The living room is, by far, the dirtiest and most cluttered area of the manor. Numerous artifacts and stuffed animals are scattered throughout it. In sections, there is the front door, which is inaccessible in Act 1, guarded by stuffed deer-bear abominations, a piano, along with a couch covered in clutter, a few blue lady paintings along with a blue lady lamp, and a grandfather clock inside of a stuffed bear. The player can access the main staircase, kitchen, and trophy room from the living room. Four monsters break into this room and force Joey to strife with them. She is initially on the losing end of the battle before Jude uses his flare gun to distract the monsters, allowing Joey to recover. Using the assistance of Jude, the player can switch characters and use them to defeat the monsters.

The trophy room is the room farthest away from the main staircase. At first, when entering with the power off, the room is pitch black and forces Joey to leave. However, when the power is on, a monster can be revealed inside. In the room, there is a stuffed deer whose antler has been redesigned into a lever. Pulling said lever will result in the deer's glass eyes to refract light into a beam into the empty eye sockets of a lion's head. Joey needs to place a red and green marble in the lion head's eye sockets in order for the globe in the center of the room to reveal the attic key. After completing said puzzle, Joey will receive the attic key and will be granted access into the attic.

The kitchen is accessed through the living room and is also where all the meals that Joey, Jude, and their babysitter eat are prepared. According to Joey, their babysitter is a very good chef and makes great home cooked meals, but they prefer to eat takeout as it is easier to dispose of. One item obtained in the kitchen is the Season-All Magic Spice Mix, which apparently is something she buys for their meals. The sink is overflowing with dirty dishes and garbage everywhere. The three of them seem to run out of food fairly easily as every cabinet is empty with the exception of an old cracker. There is a radio in the kitchen, as well as another one of Jake's treasures, which Joey has dubbed, "Pharaoh Napoleon".

The basement is where the fuse box is located. The door to the basement is in the kitchen. The basement contains all sorts of trash that Jake has dumped into the manor. It has multiple Hula girl statues, a narwhal, a set of armor, and the corpse of a Typheus minion. Other things here are mounds of Betty Crocker baking supplies, as well as bottles of alcohol, which Babysitter apparently sneaks when she thinks Joey and Jude aren't around.

The tree house is where Jude is trapped after the monster attack, and is where he remains throughout all of Act 1. In his tree house, he has diagrams, charts, tables, and schematics for all sorts of things from the Cherub Portal to the Trophy Room Puzzle. He also has geodes that he cracks open in case they are alien eggs. Jude also collects many jars of mysterious liquids and other substances in his tree house. Joey states that Jude acts as if his tree house is his secret lab and doesn't let anyone else up there. Jude keeps his flare gun, and flares inside of his tree house, as well as his marbles. Jude is accompanied by the Lone Gunbirds, who he has trained to send encrypted messages for him. After Joey uses the portal, Jude watches in horror from his tree house as she is transported to Alternia.

Portraits along the staircase

The door to Joey's room. 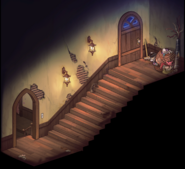 The stairs leading up to the attic.