Hammerkind is John Egbert's main Strife Specibus, and the first Kind Abstratus to be seen in Homestuck. It temporarily changes to Handlekind

when one of his hammers break.

John's first weapon. It was located on the floor in between his bed and the Magic Chest before he decided he would need it to hang up his Rolled-Up Poster. However, the Nails that were next to the hammer were also needed, leading to John dropping the Fake Arms to make room for them. It can be combined with the Nails to form... the hammer/nails. This can be used to hang up a poster.

It can be used to smash heavy duty objects and is probably the most powerful weakest hammer before alchemization, as John knocks himself out and breaks the sledgehammer when attempting to Aggrieve a Shale Imp, changing his Kind Abstratus to handlekind. The broken sledgehammer's handle is long enough to be a weapon in its own right, although it deals little damage, even against a Shale Imp. The broken hammer's head is capable of dealing some damage if ejected from a Sylladex. John's Kind Abstratus was restored to Hammerkind when he repaired the sledgehammer.

Early in the game, the Pogo Hammer seemed to be a very powerful weapon, able to slay shale imps that had been prototyped once in a single blow. Rhythmically bouncing the hammer back and forth builds up its power, to be released in a burst of green light while attacking. This attack sends both the opponent's items and John flying off. John can also ricochet between two large enemies and fly through the air as a swirling green blur, due to his short stature being encompassed by the length of the hammer. 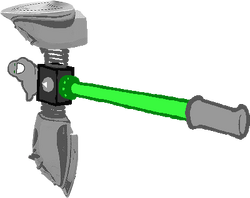 The Wrinklefucker seems to be more controlled, and more powerful, than the Pogo Hammer, as John is able to bounce around killing Shale Imps with ease without springing too high into the air, as he did with the pogo hammer. John uses the Wrinklefucker to bounce himself up towards his First Gate. Due to the hissing noises it makes and the fact that it is part steam iron, it may deal heat damage as well.

The power of the hammer has its limits, as John tried unsuccessfully to attack a Copper Giclops and a Tar Basilisk with it. Previously, the Wrinklefucker defeated enemies with ease, but against stronger enemies it fails to make much of an impression.

It served as John's weapon of choice for a great deal of time, although he did dual-wield it with the Pogo Hammer. Ever since he alchemized Fear No Anvil, however, it has been tucked back into John's Strife Deck.

The steam irons that are mounted on the weapon seem to be two Shark Professional Series Intelligent Electronic Iron, GI490s.

John does not have the strength required to lift it unaided, a problem he fixed by using the Remote Ghost Gauntlets.

It can easily dispose of Crude Ogres, and was used to get rid of at least two in the finale of Homestuck: Act 3.

from John by a Copper Giclops, who absconded after being shot in the eye.

The Sassacrusher can be seen later on

, along with the Copper Giclops that stole it. 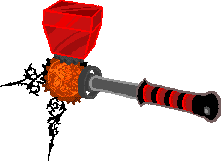 A powerful hammer that Hephaestus used. Davesprite got the code from Hephaestus through "shenanigans" and gave it to John shortly after

returning to the alpha timeline and prototyping himself. On this page

, Davesprite tells Jadesprite that after he busted into Hephaestus' palace early, he decided to flee because “hes hella strong”, and so he “snapped a quick captcha to get his huge hammers code and then gtfo”. This suggests that Davesprite alchemized a Captcharoid Camera in his timeline and used it to get the Captcha Code for the Fear No Anvil.

Its name implies that it may have been Hephaestus' blacksmithing hammer. It appears to have some time-related abilities, including stunning enemies by stopping them in time. The extent of these abilities, however, is not yet clear. The clock that appears when the enemies are stunned portrays elements of the zodiac (e.g. a ram, a bull, a scorpion etc.) and is a clear reference to the trolls. In the Flash page, [S] Wake

It costs 500,000 units each of Build Grist, Garnets, Diamond, and Gold, and one unit of Quartz, and is far too large to wield. John alchemized

a smaller version, costing only 5,000 units each of Build Grist, Garnet, Diamond, and Gold and one Quartz. The inclusion of one piece of quartz is explained by the fact that some clocks use a small piece of quartz to keep time by subjecting the crystal to an electric current and measuring its vibrations.

Its name comes from the phrase 'Fear No Evil', implying that it is powerful enough to kill almost anything, as John would have nothing to fear of the enemies he'll encounter. Surely enough, it can dispatch a strong enemy like a thrice-prototyped lich with little trouble. However, when the fourth prototyping is completed, even a single imp becomes a threat, withstanding upwards of 50 (normal) hits before finally dying.

The name is an anagram for "LAVA INFERNO".

Its design appears to be themed after the Land of Heat and Clockwork; it consists of cogs, clock hands, and a head of Garnet.

The weapon itself is probably a reference to Hephaestus, from whom the weapon was stolen. In Greek myth, Hephaestus was the God of Blacksmithing, which further supports the theory of him being Dave's Denizen.

The hammer was last seen used against The Condesce in [S] Collide and made her freeze in time for a short while.

In the Act 4 epilogue, a cyborg bunny appeared wielding a miniaturized version of the warhammer, along with three other weapons. John later receives a monstrosified version through a series of shenanigans. By the time he runs out of sopor slime, Gamzee Makara appears to own a full-sized version of the Warhammer, filed in his jokerkind specibus. Later, he is seen holding it, letting Karkat behold its glory.

It is one of the seven legendary weapons of cherubim folklore and represents its namesake continent. According to the concurrent evidence of a variety

, it was forged in fire by the smiths of Pipplemop and commissioned by the sage Lord of the Wozzinjay Fiefdom in the Realm of the Snargly Fruzmigbubbins. 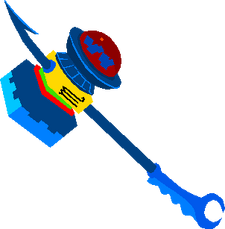 This is an incredibly powerful hammer, able to kill the strongest enemy John has so far directly faced in combat (barring Bec Noir and possibly Typheus) in a single hit, as well as deal damage to Bec Noir. It was first seen here.

This hammer bears an uncanny resemblance to Vriska's Doomsday device and the Warhammer of Zillyhoo. The hammer bears Vriska's "Scorpio" symbol and has the design of Vriska's horns incorporated into it the handle being one horn and the tip resembling the other. It is possible that Vriska's ancestral sword had something to do with the alchemization. The objects in the "popping" mechanism are the Fluorite Octet.

It was probably alchemized by combining the Fluorite Octet and Warhammer of Zillyhoo, since John possessed the latter and got the code

for the former from Vriska herself. Components of other objects also seem to also be visible: Vriska's ancestral sword (the blade and handle), Mindfang's diary (the Scorpio symbol), Ahab's Crosshairs (the handle grip), Vriska's Doomsday device (the red hemisphere) and the Fluorite Octet (the dice in the mechanism). It is unknown whether any of these objects and/or any other hammers possessed by John were used in the alchemization, since all of these (except Ahab's Crosshairs [in theory] and other hammers possessed by John) could not be accessed by John between the moment he woke up after his second impaling by Jack Noir (during which Vriska sent him the code for the Octet) and John's arrival at the Beat Mesa. All of the resemblances to these items could just be a result of the Fluorite Octet's connection to them.

Bec Noir found a memory version of this hammer in a chest in a dream bubble after two years of traveling through the Furthest Ring. John woke up and attacked him, causing him to let go of the hammer. They then proceeded to fight until Rose turned up and distacted Noir. Interestingly, the 'Clobber' and 'Bonk' effect that appeared when John fights Jack with this hammer was spelled using Vriska's typing quirk (CLO88ER

). The weapon was shown to produce an effect very similar to that of the Fluorite Octet when used to hit someone. In fact, it may even have the same moveset. The eight possible moves shown in the roll of John's final die are: 1. Pony Stampede; 2. T-Rex; 3. Elf; 4. Prank; 5. Rerollx2; 6. McConaughey; 7. Naptime; 8. Ridiculous Hat. After hitting him with the hammer, the Fluorite Octet rolled, giving Jack a Ridiculous Hat, with the combination 1-2-3-4-5-6-6-7. (Oddly enough, there isn't an 8 in the sequence, even though ridiculous hat was #8.) Given that "McConaughey" is a joke related more to John than Vriska, there is the possibility that the Vrillyhoo Hammer's Octet may not have the same moveset as the original Fluorite Octet. The similarity of the Warhammer of Zillyhoo to a jester's hat and John's love of pranks may also have an influence on the range of attacks the Vrillyhoo Octet is capable of. John later left the memory version behind when he entered another part of the dream bubble, but presumably the actual hammer is still on the battleship.

The hammer's name was revealed in a summary of EOA5 on Tumblr and later in-comic.

The manner in which John constructed the hammer is not yet known, but given Zillyhoo's cost, it is likely that this hammer was substantially more expensive. It seems to be named for its popping mechanism, the Warhammer of Zillyhoo, and Vriska.

The product of combining the claw hammer with John's Problem Sleuth Game, (as seen here

(although multiple recipes with different costs are possible, as shown in Jane's fetch modus