Hero Mode is a visual mode utilized by Andrew to emphasize a particularly epic moment in the story. Andrew originally called such images "action panels", but waited until the term "hero mode" wormed its way into his brain before sharing this nugget of wisdom with his fans. The Hero Mode art style is used to depict protagonists, while the corresponding mode for antagonists is known as Villain Mode. Hero Mode and Villain Mode, despite a difference in nomenclature, are functionally and artistically similar.

Initially Hero Mode was only used to display characters in a starkly heroic (or villainous) light; the majority of updates depicted characters in typical sprite proportions. However, as Homestuck has progressed Hero Mode has been utilized more frequently, especially when the visual aspect of the story needs to be emphasized over the textual. Sprite-style animation is still used for Pesterlog pages or for pages with text narration.

Throughout Act 5, Hero Mode-like proportions have been used in circumstances that are less overtly climactic but still require a level of visual dynamism. Conversely, Hero Mode also allows for a greater level of nuance and subtlety in facial expression. Examples include Karkat's interaction with Jack Noir and Vriska's treasure hunting.

Hero Mode has also been used as a running gag of sorts in relation to Gamzee Makara. Readers had noticed that out of all of the trolls, Gamzee had been the only one not to appear in Hero Mode. Andrew then proceeded to release a series of blurry images of Hero Mode Gamzee, before finally including a proper image in the story (which occasionally faded in and out of blur, and had the words HERO MODE covering the entire background

Hero Mode is almost never combined with the way that characters are "normally" portrayed, though there are a few exceptions

Hero Mode dispenses with the black outline that typifies sprite-style animation and scribble mode, using blocks of color to create stylized and iconic illustrations instead of the edited and repurposed sprites that are typical of earlier parts of Homestuck. Arguably the biggest difference between Hero Mode and other art styles is that the physical proportions of characters in the former allow for the depiction of more realistic versions of the kids, as shown by Rose's multiple hero modes. Over time these proportions have steadily moved towards increased realism—early examples of Hero Mode did not depart greatly from sprite proportions. Compared to Hero Mode, the characters are normally deformed.

Spades Slick gets a bit villainous. 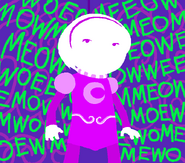 Aradia getting spooky in Hero Mode

Troll Andrew Hussie begins to lose it - both his mind and his incredibly shitty disguise. 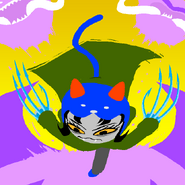 Terezi in WHAT THE FUCK JUST HAPPENED Mode 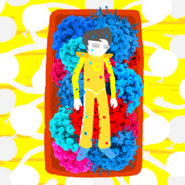 Dirk and his Awesome TAT

Roxy running away in Hero Mode.