Hiveswap: Act 1
Hiveswap: Act 2, entitled Dead Freight, is the second Act of the Homestuck adventure game, Hiveswap, released on the 25th of November, 2020.

A What Pumpkin Studios Tumblr post post on the 11th of November, 2017, announced that Act 2 would see a Spring 2018 release. This release date was delayed, however, and the game's progress was left totally unknown while episodes of the Hiveswap Friendship Simulator and Pesterquest were released instead.

On July 7th, 2018, former Hiveswap music composer James Roach made a post on his tumblr discussing the music in Hiveswap: Act 2 in relation to the music in Hiveswap Friendsim. In it, he mentions that Act 2 contains a "significant interaction" involving Troll Call trolls Konyyl Okimaw and Azdaja Knelax, revealed in Friendsim Volume 7 to be mercenary partners and matesprits, and that the pair reportedly have musical themes that can overlap to form a single melody, like "two sides of one coin".

A new trailer and Steam store listing were both posted on Halloween, 2019, and another new trailer finally announced a November release date on the 25th of October, 2020. One last trailer on the 16th of November confirmed a November 25 release date. The game released on November 25th, 2020. It was initially released without credits, with the Homestuck Team Twitter announcing on November 27th that the credits would be patched in later.[1] An update including the credits and temporarily removing the bee rhythm minigame due to accessibility concerns was released on November 28th.[2]

In a further post discussing the music of Friendsim Volume 9, James Roach stated that Chahut's theme ♫ was originally created for a potential sequence in Hiveswap: Act 2 described as a "Highblood minigame".

On the first anniversary of Hiveswap: Act 1, James Roach released some music concepts (archived link) for Act 2, revealing the track playing in an area with many dialogue options would change its instruments depending of the troll you interact with, based on their importance and caste. Also, he stated all trolls from the troll call would be present as well background trolls with "brief unimportant interactions".

Despite being announced in the Troll Call and appearing in promotional material for the game, Zebede Tongva and Charun Krojib did not appear in the game, with only their empty residences being visited by the player. Additionally, game files show that there were originally plans for a fishing minigame by Charun's cave.

After escaping from Outglut's bombing, Joey and Xefros begin heading towards Jeevik Island for its upcoming Jeevik Week party to meet up with Fiamet and Cridea Jeevik. The duo narrowly escape an explosion caused by a missile and pass through Charun's cave to get Joey fake troll horns as a disguise, along with a sweatshirt she was already wearing. They find and enter Zebede's house and Joey does a bee dance for his lusus. They leave to a train station where they attempt to get tickets to Jeevik Week, but Joey breaks the ticket booth due to the fact that she doesn't have troll blood, and it gives a message that a imperial drone is coming to fix it in two hours. The duo meet Zebruh, Chixie, Elwurd, and Marvus on the platform, and Elwurd offers the Joey and Xefros two fake tickets in exchange for one real ticket. The player can then choose to get a ticket from Zebruh by getting Marvus to recommend him for Slam or Get Culled, or getting one by convincing Chixie not to go. This choice makes either troll not show up on the train. Regardless, Elwurd wants Joey to give her some pogs to sweeten the deal, which she does. Joey and Xefros board the train, where they can meet the various trolls from Friendsim, with the trolls separated by blood caste. Soon after boarding, Joey gets a message on the tablet from Fiamet, who tells her than both Alternia and Earth will be destroyed in 11 days if she doesn't go back through the portal. Joey then recieves a message from Cridea who tells her to change the train onto the express track, in order to reach Jeevik Island faster. When they reach the gold/oliveblood car, Azdaja and Konyyl are arguing in-front of the next door, and Joey helps them settle their differences to move on. When Joey and Xefros enter the jade/tealblood car, they interrupt a conversation between the jades where Daraya is accused of stealing a book, which had various pages torn out of it. Marvus enters the car, and Tyzias suggests they do a court trial to solve the case, with Joey forced to be a legisracerator to defend Daraya, Stelsa serving as the prosecution, and Marvus serving as the judge in a Ace Attorney-esque minigame. there are three outcomes of the trial, depending on if the player imported their save from Act 1 to get extra items:

After the case, Tyzias grades Joey on her work. Joey and Xefros then reach the purpleblood car where it is revealed that Marvus was just pretending to be nice, and he forces Joey to kill trolls based on a color wheel, with Chahut holding Xefros hostage. The wheel lands on gold, and she takes a picture of Cirava sleeping, due to their resemblance of a dead body. The wheel lands on teal next, and she gets a dagger from Tegiri as proof of "killing someone", but then has to get some paint from Remele as fake blood. In the last spin, the wheel lands on purple and Marvus gives Joey time to find some way to kill one of them. She doesn't find anything, and Baizli ambushes her on the way back. Xefros comes at the last minute and pushes Baizli onto some spikes, killing him. Entering the purpleblood car once again, Barzum is freaking out and having a panic attack because Baizli is dead. Marvus congratulates Joey on the kill and lets them pass. Joey and Xefros take out the conductor, and successfully change the track. They talk about the current situation when a giant blast from presumably a lusus hits the train right on the rustblood car, destroying it. The damaged train is shown in a swamp before the screen cuts to black.

Joey and Xefros stand among a crowd of Rustbloods and Bronzebloods in their train car.

Folykl sitting on her lusus. 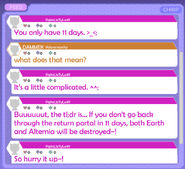 Fiamet warns Joey that she has limited time to return to Earth.

The Indigobloods in their train car.

The Jadebloods in their train car.

The two of them stand in the indigoblood train car with multiple Musclebeast portraits.