“wat can it even mean 2 be non-canonical w/in da context of an inherently extracanonical framework ? skeet skeet brrrap !”

Hiveswap Friendship Simulator: Volume Sixteen, entitled "Of Cult- And Capt-ivation", is the sixteenth installment of Hiveswap Friendship Simulator, a series of "loosely-canonical" Hiveswap spinoff visual novels in the style of dating sim games, but termed "friendship simulators" instead due to their focus on platonic friendships instead of romance. The befriendable characters in this installment (first introduced in the Troll Call) are Fozzer Velyes and Marvus Xoloto.

You muse upon the fact that you're nearing the end of your adventures on Alternia, your thirst to make new friends waning just as well. Even while you are approaching the edge of town, you still hope that friendship would be something worth the while.

The night becomes foggy, obscuring your vision. As it were, you still manage to deduce that you're someplace remote, the landscape harsh and barren. Stumbling across a signpost that reads "Welcome to Happy Absence Pit Park", you hear someone muttering to themselves. You find Fozzer digging a hole in the ground and announce your presence to him, causing him to whip around to scrutinize you. Suspicious of your true identity, Fozzer asks that you describe outer space to him. After giving him a detailed description of space, Fozzer ponders your answer for a bit before firing another. Despite not fully knowing what he's on about, you agree that humans have a strong consciousness about class struggle. Delighted to meet a fellow comrade, Fozzer hands you a shovel so you can join in on some honest work amongst the oppressed working class. While you toil, Fozzer chats with you and asks what you think of Alternia.

You find yourself wandering down the road with no real purpose for the night, but a phone call interrupts your stroll. Though you aren't too happy to see it's Zebruh calling, you answer the phone and wait for him as instructed. After a while, he finally makes it to your side and informs you that he'd got two tickets to ClownFest XXwreX and would like you to come along with him. Nervous with what might transpire, you aren't too sure about tagging along. Zebruh reassures you that everything would be fine, explaining that the concert is centered around purpleblood performers. 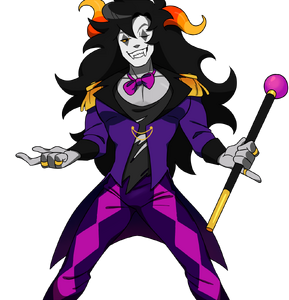